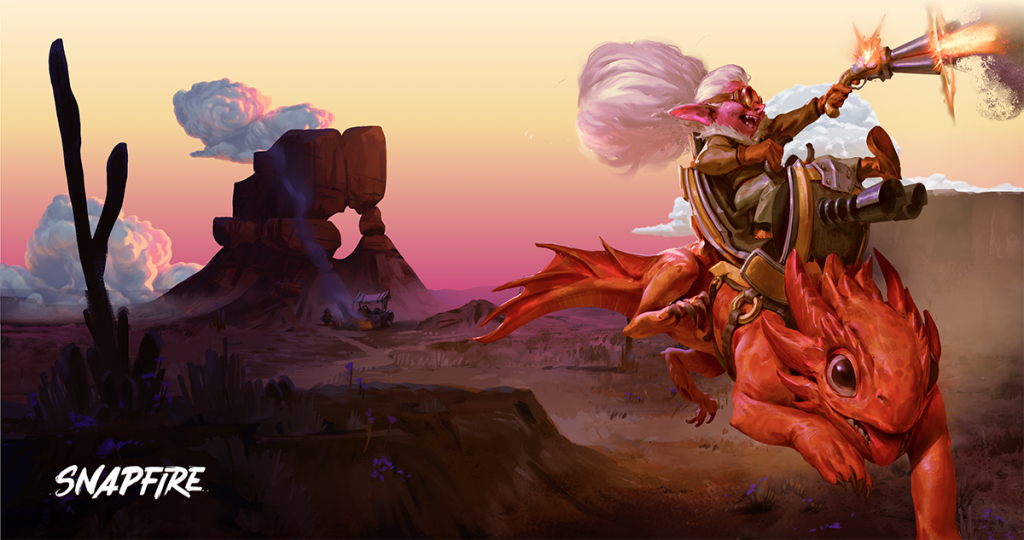 Snapfire, and her pal Mortimer have landed in Dota 2, and are ready to slow, burn, and explode their opponents (Image via Valve Corporation)

With the release of update 7.23, Dota 2 has introduced Snapfire, the first of it’s so-called “Outlanders.” Better known to her friends as Beatrix, Snapfire is a Keen hero (like Tinker and Timbersaw), who rides into battle on her trusty dragon toad, Mortimer. Snapfire is listed as a Ranged Support, with some Nuker and Disabler elements tossed in for good measure.

With this new hero set to take to the field in one of the most significant patches ever, let’s take a first look at the meanest (and first) Firesnap Cookie baker Dota has ever seen.

Snapfire’s Q is a ranged blast that damages and slows opponents. Its template is quite narrow, and does significant extra damage at point-blank range, making it ideal for trades, and perfect for pushing lanes if needed. The cooldown is average, meaning you can use this ability to harass effectively.

Firesnap Cookie feeds an explosive cookie to either her mount, Mortimer, or to nearby allies. Upon clicking, this causes them to hop a short distance, stunning any enemies you land on. The direction of the hop is based on your existing facing, and the range is quite short. With a 24/22/20/18 cooldown, this ability is best saved until it’s really needed

Activating her mounted turret, Snapfire fires six fixed-damage attacks. The attacks activate when you use your basic attack, dealing a chunk of damage to the opponent selected. It also slows the enemy’s attack speed, and buffs your attack range, again making it a potent trading tool.

Snapfire’s R launches a barrage of firespit from Mortimer. The attack stops you in place, and you can move to direct the firespit. Each “glob” of firespit deals damage on impact and creates a pool that slows and deals damage over time.

Where will people play Snapfire?

Snapfire is listed as a support. Still, her extensive arsenal of damaging abilities and mobility will likely make her a popular pick for mid and position three players, especially close to her release.

However, her support kit cannot be ignored. This little Keen lady has so many slows on her abilities that escaping her is going to be a nightmare. As a support in the side lanes, she has incredible potential for catches and kills. With her Firesnap Cookie, any melee champs laning with her effectively have a Force Staff stun and a Blink Dagger from the moment she picks up the ability. I can already picture plays where a Sven or Juggernaut is launched on the opposing team, stunning them and leaving them easy pickings for the carry.

Ultimately, the supreme utility she brings, as well as the variety and consistency of her damage, is sure to make her very dangerous in either a supportive role or an off-carry position.

This patch is a lot to take in. But this little dude is EVERYTHING. Hello, Mortimer. Welcome to the Dota 2 world <3 pic.twitter.com/Fby7EJHWSf

In lane, Snapfire is set to be a bully. Being able to harass her opponents at range, while keeping herself and her allies safe, is a dangerous combination. The nuke potential is very much there as well. Thanks to her R, any opponent locked in place, either by her Firesnap Cookie stun, or ally’s crowd control abilities, will melt in seconds. In addition, because of the sheer amount of slows, there’s no escaping her once she finds you.

But the most exciting aspect will be what Snapfire brings to a team fight. Not only can she reposition her allies, potentially saving them from harm, but her stop-in-place R barrage can zone out opponents, and punish those foolish enough to close on her.

Snapfire’s weakness will no doubt be what happens after she sets up for Mortimer Kisses. If the hero has already burnt her W, she’s a sitting duck (or lizard even). Even with her grossly powerful Q, and nasty E damage, the hero will struggle to peel away from her opponent’s carries if she’s ever focused. The idea of a glass cannon support springs very much to mind, especially given her high front-end nuke and damage-over-time potential.

Ultimately, expect to see a lot of Snapfire either picked or banned in competitive soon. As the qualifiers for DreamLeague Season 13 kick off in early December, there’s sure to be plenty of teams in need of a support pick that can lock down and neutralize their opponent’s carries.

Snapfire is ready to play in Dota 2 right now. For more information on her abilities, and a full patch breakdown, head to The Outlanders Update official website.