How To Team Fight In Dota 2 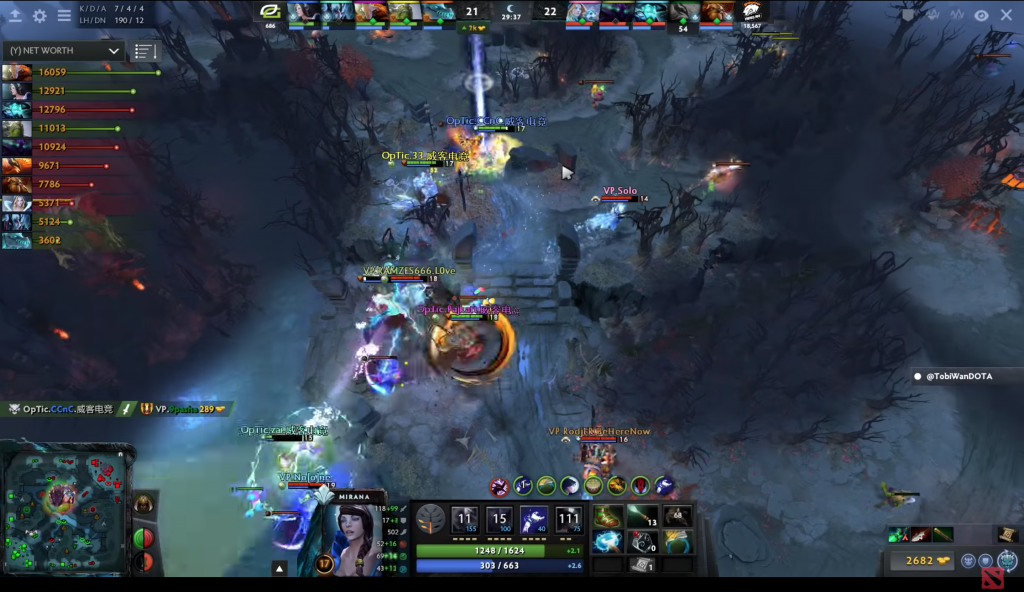 Team fighting can be the ultimate tipping point in any game of Dota 2. Make sure you know what you're doing with our guide on team fighting.

When people are in class or at work imagining about what it will be like to play Dota 2 when they’re free, they don’t think about farming or placing wards. They’re thinking about landing that perfect spell, nailing that sweet skill shot or rampaging through an entire team.

That applies to new and veteran players alike…but what can new players do to get good at team fighting? And how should you balance team fighting in Dota 2 with all the other parts of the game?

Check out our guide to Dota 2 team fighting and find out.

What is the Difference Between a Gank and a Team Fight in Dota 2?

It’s worth starting a discussion on team fighting by providing a clear distinction between a gank and a team fight.

“Ganking,” for those not familiar with the term, is a concerted effort by a few members of a team to kill a specific enemy hero. Though they can often spiral into a team fight, a clean gank will play out quickly and easily; ambush an enemy hero, kill them almost instantaneously, and get out before the enemy team can counter. Ganks can be done for a number of reasons, but the most common is to slow down the item and level progression of a specific enemy.

Unlike a team fight, a gank does not require a majority of players to be involved. This allows core players to farm and gain experience while their teammates can seek out kills, allowing them to amass a resources lead over the enemy.

A great example of a gank can be found here (at the 14:40 mark) in the TI8 game between Virtus Pro and OpTic Gaming. During the laning phase, four members of OpTic rotate top in order to kill VP’s carry player. They manufacture a four-on-one situation by using Smoke of Deceit, use their spells to lock down Storm Spirit, kill him without incident and scatter across the map shortly thereafter. All the while, their carry (Juggernaut) farms bottom.

For comparison’s sake, a team fight can be found at 32:40. All 10 players are involved, with eight kills being tallied when the dust settles.

While the line can sometimes get blurry between the two, as a general rule of thumb team fights simply last longer and involve more people. As a result, they can more directly and more immediately impact the game but come at a much greater risk.

When Should I Team Fight?

Team fighting is an important part of Dota 2 but, in reality, simply winning them isn’t necessarily going to translate to victory. Sure, killing enemy heroes often ends up being the final step to breaking high ground, but getting the better of a three-for-four trade is rarely a big victory in its own right.

Indeed, there are two things to consider when pondering whether to call for a team fight; risk vs. reward, and return on time investment.

Weighing the risks of an unsuccessful team fight against the rewards of a victorious team fight is the key to determining when to start a skirmish.

Take a look back at the aforementioned OpTic vs. Virtus Pro team fight (at the 32:40 mark).

The potential rewards for OpTic here were huge. With the top lane pushed deep into VP territory, taking out two or three heroes would have guaranteed an easy Roshan for OpTic. Taking out more than that would have allowed them to push high ground and take at least one lane of barracks.

On the flipside, the risks turned out to be fairly low. While VP won the fight in emphatic fashion, killing all five members of OpTic and gaining 5,000 gold in net worth, it wasn’t able to convert those kills into anything more, taking zero towers and leaving Roshan unharmed.

Though the gambit didn’t pay off for OpTic, it was a low-risk, high-reward play that was worth making.

Oftentimes in lower-level pub games, teams will look to fight but won’t necessarily do so at a time where it leads to anything bigger. Worse, they will sometimes work in the opposite direction, looking to pick fights in situations where a messy engagement can open up game-winning opportunities for the enemy.

Being able to accurately measure the risks of losing a team fight with the rewards of winning one is key to gaining a substantial gold and experience lead on an enemy team.

Time is a resource that is easy to lose and impossible to gain in both Dota 2 and life in general, and if one team is spending time on getting gold and experience and the other isn’t? Well, that’s going to add up.

For carries like Antimage, Ursa and Alchemist, 60 seconds translates to hundreds of gold from killing creeps and neutrals. Repeat that two, three or four times in a game and it becomes thousands. Missing out on thousands of gold means missing out on items and missing out on items, in turn, means they are not able to farm as efficiently as the game progresses.

It’s a slippery slope and teams should not be quick to sacrifice guaranteed gold in hopes of larger returns. As with risk vs. reward, being able to accurately predict whether an engagement is worth the resources spent is critical when it comes to considering a team fight.

Unfortunately, this is much harder to do. Every game of Dota 2 is different and there are just too many variables to offer a definitive guideline on when to tell an entire team to go on the offensive. Just make sure to remember that the before, during and after of a team fight comes at a very real price.

The Steps of a Dota 2 Team Fight

So you’ve weighed the risks, you’ve rallied your team and you’re ready to take down some enemies…what next? Allow us to give you the step-by-step on how a Dota 2 team fight goes down.

This might seem like a no-brainer but the most important part of beginning a team fight is actually knowing where your enemies are. Dota 2 has literally dozens of different spells and items that allow heroes to pounce on foes and no area of the map is ambush-proof. Knowing enemies’ locations is key to maximizing the impact of your spells and mitigating those of the enemy.

There are many ways to gain vision, including planting Observer Wards, scouting ahead with an invisible hero or using certain spells like Clockwerk’s Rocket Flare or Zeus’ Thundergod’s Wrath. Knowing where enemies are (and where they are relative to one another) both prevents a preemptive sneak attack and sets you up to perform well in step 2.

“Initiator” is a character class unto itself in Dota 2, right alongside carry and support. Generally speaking, these heroes are defined by AOE disables, but there are some exceptions. Examples of strong initiation spells are Tidehunter’s Ravage, Faceless Void’s Chronosphere and Axe’s Berserker’s Call.

A well-executed initiation provides a bit of burst damage, allows teammates to safely approach and opens up the opportunity to take out low-health targets before they can counter.

You shot your shot at the enemy team, but they almost certainly have something to shoot in return. Now that your primary initiation spells are down, the enemy team has the opportunity to use theirs and from there, all hell will break loose.

Depending on the hero lineups of both teams, the difference in farm and experience, and how Step 2 actually went for either side, the counter-initiation may be organized, disorganized or non-existent.

Following Steps 2 and 3, most spells on both teams will be down. Stragglers from either side will trickle in and carries will have their opportunities to shine as they chase opponents and use their right-click attacks. Some players will be running, looking to avoid damage. Others will be on the chase.

Step 4 ultimately serves as the final straw in terms of determining which team “won” the fight. All that is left now is…

With the fight essentially done, all that’s left is for the losing team to run away and the winning team to decide if chasing is worth the time. The fight is effectively over at this point, with the winning team able to set its sights towards other objectives.

So what do these five steps look like in practice, then? Let’s take a look at the first team fight in this video; the battle which set up Team Liquid’s first-place finish at The International 2017.

Team Liquid knows that Newbee is in the process of taking Roshan. They gain vision when Juggernaut uses Blade Fury and enters the pit, which gives them sight of four different Newbee heroes.

Though the Juggernaut was the first hero to enter the fray for Team Liquid, the initiation comes when Dark Seer uses Wall of Replica and Vacuum. This momentarily disables Newbee, deals damage through the illusions and sets up a massive Chain Frost for Lich.

Newbee attempts to counter-initiate back with Sand King’s ultimate and Shadow Shaman disables. Unfortunately, when Liquid’s Necrophos teleports to the shrine, Sand King finds his Blink Dagger disabled by the Radiance burn, which results in Epicenter being wasted. Shadow Shaman, meanwhile, is locked in place by Earth Shaker’s stuns. This results in Newbee taking the full brunt of Chain Frost, Juggernaut’s Omnislash and Earth Shaker’s full arsenal of spells.

Newbee’s Venomancer re-enters the fray and deals some damage, but is ultimately forced back by Juggernaut. Necrophos attempts to kill Venomancer with Reaper’s Scythe, but his ultimate doesn’t do the trick thanks to Venomancer eating the Cheese a split second before being caught.

With their teammates dead, Sand King and Venomancer go on the run. Venomancer is caught and killed while Sand King manages to teleport away, ending the engagement.

Not all fights will play out as perfectly as this one did, but it highlights all the important steps in terms of setting up, initiating and executing a team fight.

Don’t…Just assume your team is with you– This is something that happens in any team-based game. One person, maybe two, will run into the entire enemy team, get ripped apart and proceed to chew everyone out on voice chat for not following them. If you’re going to look for a fight, let everyone know beforehand.

Do…Know your role- Heroes can thrive in multiple roles and knowing how you and the character you’re playing fit into your team’s lineup is important. If you’re playing as Rubick, does your team need you to initiate team fights with Telekinesis? Or hang back and deal damage from afar with stolen magic? Find out what your team expects of you, and deliver.

Don’t…Demand your entire team be there for every engagement- Make no mistake, there are plenty of carry players out there that have tunnel vision on their own farm, ignoring their teammates and anything the enemy may do. That said, remember the “return on time investment” idea. A two-for-two trade that sees a carry player comfortably farming elsewhere is probably better than a three-for-two that he has to leave lane for.

Do…Fight dirty- You know what’s better than a five-on-five team fight? A five-on-four team fight. A numbers advantage is a great thing to have and if an enemy hero died or is otherwise unavailable, that’s something to take advantage of if possible.

Don’t…Look for team fights if you’re far behind– Some Dota 2 players have a gambling addict mentality. “Oh, I lost that team fight…so I need to do it again and win to make up the difference!” Though Dota 2 is a game where comebacks are very possible the safest (and most often, best) option if you find yourself playing from behind is to look for ganks to slow down the enemy’s item progression rather than to force a team fight that you will likely lose.