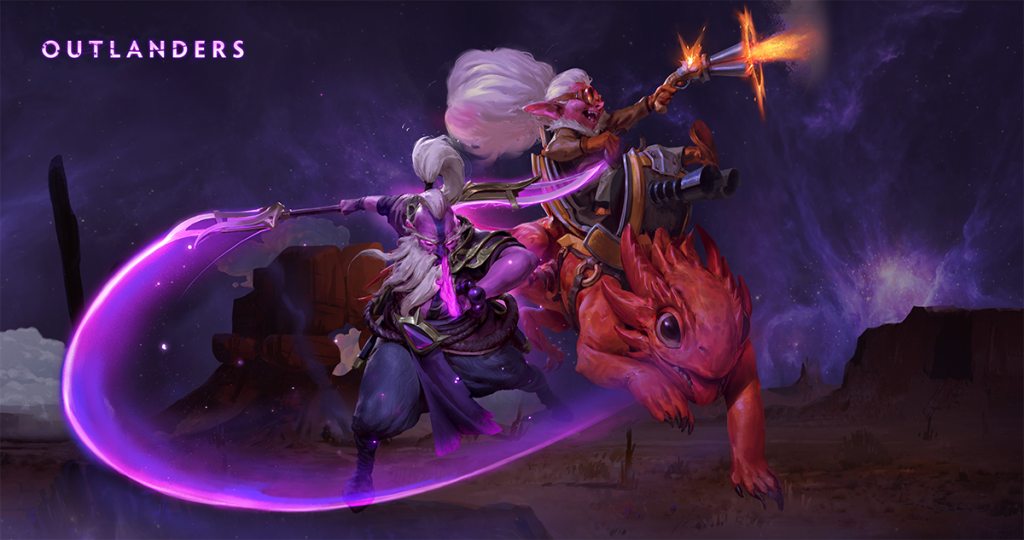 Update 7.23 is one of the biggest changes to Dota in recent memory (Image via Valve Corporation)

After waiting for bated breath for months, the 7.23 update for Dota, The Outlanders Update, is finally here. In one of the most dramatic patches to Dota 2 in recent memory, Valve has seemingly completely transformed the game with a number of drastic changes.

Besides the notable introduction of both Snapfire and Void Spirit, the patch has made massive alterations to couriers, leveling up, the map, and the overall economy of the game. The 7.23 update even adds an entirely new class of items, a brand new set of neutral buildings, as well as rebalancing many of the existing heroes and items.

The Outlanders Update is HERE!

The courier changes, in particular, are likely to completely alter the pace of the game. As per the patch notes, Each player now starts the game with their own courier, which levels up with your hero. Although the health, speed vision, bounty, respawn time, and stats in general of the courier have been nerfed, the fact there are now automatically five of them flowing around is sure to change the face the game.

Couriers are set to be everywhere as the 7.23 Outlanders Update is released (Image via Valve Corporation)

On top of this, your Gold Per Minute stat is now tied to the life of the courier. Your item carrying friend will generate 85 GPM while alive, on top of its role as your own personal pack mule. Keen-eyed stats people will notice this is less GPM than the previous passive generation. But have no fear, as not only are Observer Wars now free, but you also have a tasty three town portal scrolls upon first spawning, and there’s a whole lot of free neutral monster items hanging around.

Yes, that’s right, Valve just added an entirely new set of items. Neutral monsters now drop a set of unsellable items, which you can trade within your team. With five tiers of items, which advance the longer the game lasts, and minimal drop chances, these items don’t initially seem too game-breaking. But from just glancing at the list, items like Third Eye, Havoc Hammer, and Ninja Gear already look like they’ll have a big impact on matches.

But 62 unique neutral items now in the game, Valve has attempted to balance things out by both increasing player’s backpack slots, buffing up the neutral monsters you’d be taking these items from, and deleting the Side Shops. The Map has also seen a number of small layout changes, with a few extra paths and alley, but the biggest change is the addition of Outposts.

Outposts have replaced Side Shops and gives teams a new neutral objective. The Outposts grant bonus XP over the course of a match, as well as vision and a teleport destination. They activate after 10 minutes have passed in-game, and can be captured for your side after a short channeling period.

Almost every item in the game has now been modified either simply by its cost or with modified stats. What’s more, Stout Shield has been removed from the game. Originally a must-buy for many heroes, the item has been rendered obsolete by a passive 8 Damage Block granted to all melee heroes. The removal has also changed the recipe for Vanguard, which now needs an additional 200 gold to be built.

On the rework front, Vladamir’s Offering now gives a massive +25% Lifesteal Aura, and +6 All Stats, but has increased in cost by 225 gold, while Helm of the Dominator has had its stat bonus increased to +7, and all Dominate Aura bonuses are now 50% stronger on player units. On top of this Drum of Endurance is now a much more viable item, with an added +20 Attack Speed Aura. Although it has had its price increased by a hefty 275 gold.

Overall many items have also seen their damage increased, bringing them in line with some of the new neutral items. The changes seem aimed at making items more game-changing, especially some of the higher tier options.

All heroes can now level up to 30. Once they get there, they unlock their entire talent tree, massively increasing the power of every hero late game. Respawn time will not increase past level 25, and XP bounties max out at level 25 values. This seems aimed at creating more decisive late games, where a team with the lead won’t have to cautiously poke at their opponents high ground, or wait for Roshan and Aegis, instead of using their level 30 power to finish the game.

Scepter abilities seem to have come under fire this patch as well. A bunch of heroes have seen their Aghanim’s Scepter buffs scaled back, just a few patches after every hero was given one.

Say goodbye to Morphshaker this patch!

The biggest expected change, however, hasn’t materialized. Players, fans, and analysts alike expected the Morphling/Earthshaker combo to be nerfed into the ground. And while both heroes have taken a hit, it’s not as massive as some might expect. Instead, the developers have opted to change one of Morph’s more broken features. The hero no longer has two different health and mana amounts in each of his forms. This means no swapping form mid-fight to completely refresh health. Meanwhile, Earthshaker has taken a small nerf to his Enchant Totem abilities, while Echo Slam’s base damage was actually increased. Definitely not the huge nerf people were expecting.

In fact, the focus has been on bringing some of the more questionably effective heroes into line with current power levels. Clinkz, Drow Ranger, Crystal Maiden, Bane, Undyne, Vengeful Spirit, and Treant Protector have all seen changes to buff their viability in-game. The fact that almost all these heroes saw play in the last Major has done little to dissuade Valve to keep things as they are.

Of course notably absent from this patch breakdown are impressions of Snapfire and Void Spirit, so keep eyes tuned to Hotspawn for our first impression of the new hero. Keen-eyed data miners have already noticed something though. It looks like there are five heroes still in the pipeline as of this patch…

What’s more, the patch has made notable hints at a so-called “Mango Season,” in both the updated Enchanted Mango item which can now be stacked up to three times and the new Mango Tree neutral monster item. Could this be a nod to a new hero (mango themed?), or simply the next update on the way.

Outlanders is out with BOTH Dota 2 and Underlords.

Be sure to check them out both.

As a whole, these are some crazy changes. With couriers for all, new neutral buildings, a whole new class of items, and a massively revamped economy, the 7.23 update has drastically altered the game.

However, as usual with big changes there are some elements that might provoke undesired effects. Things that spring to mind are an oversaturation of courier scouting, teams stalling out games to try for a chance of Tier 5 Neutral items, and the new level 30 full talent tree instead leading to even longer games. But overall, the 7.23 update seems focused on making games quicker, and certainly with mass couriers, items galore, and a lot more damage tied into existing items, it’s clear this patch will change the pace of the game one way or another. For full details of the patch notes, and all the changes made, head to the official patch website.