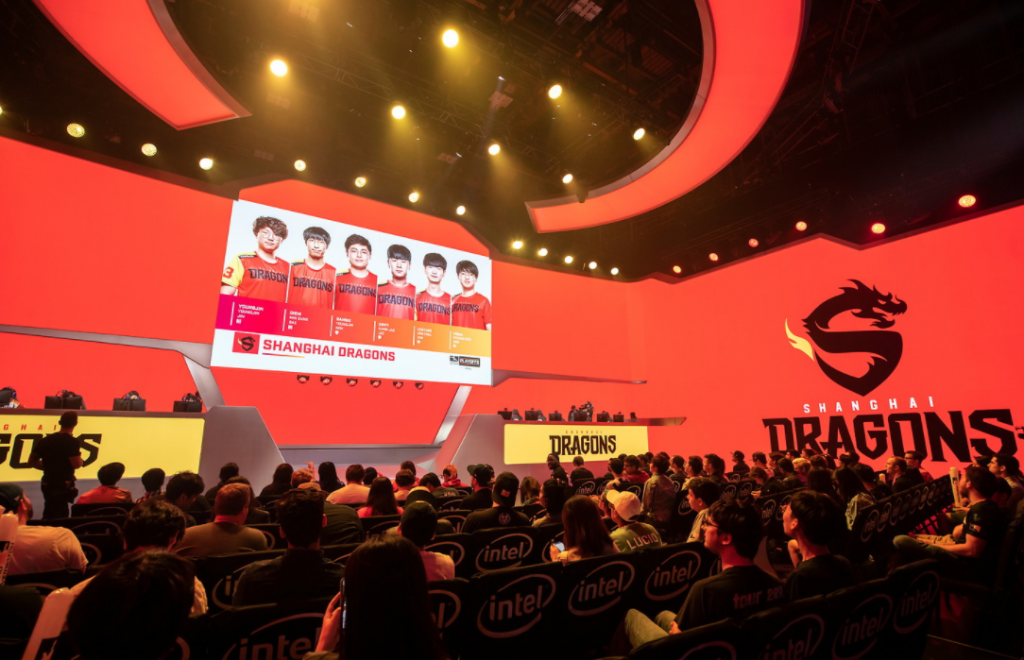 Dragons and Dynasty dominated the APAC bracket and will now face off against NA challengers starting on October 8th. (Photo courtesy Robert Paul for Blizzard Entertainment)

Shanghai Dragons and Seoul Dynasty officially secured the two available APAC slots for the Overwatch League final four which is scheduled to take place in October. As the top ranked team in the world, the Dragons were expected to advance with relative ease. They played with their usual technical brilliance and continued to dominate in the playoffs just as they did in the regular season. Dynasty, on the other hand, entered the playoffs as more of a wildcard.

Seoul entered the tournament as the fifth seed and had to earn their way into the main bracket from the knockout rounds. Even from their first playoff match, it was obvious that there was something special going on with Dynasty’s playoff strategy. They were showing off unique looks that, in many ways, were the perfect answer to the most popular compositions in the APAC playoff meta. The unexpected strategies combined with their flawless execution caught everyone off guard, ultimately earning them their spot in the final four.

Shanghai makes undefeated run to qualify to the final four

Dragons defeated the NYXL and Seoul Dynasty to earn their spot in the final four double elimination playoff bracket. Shanghai dominated the APAC region throughout the 2020 season, only losing two matches in total the entire year. They finished in first place in the OWL standings with a 27-2 record, and won two regional titles at the May Melee and the Countdown Cup, as well as earning second place at the Summer Showdown. Needless to say, they are a favorite to win the 2020 championship.

Shanghai’s first playoff match was against the New York Excelsior in the first round of the double elimination bracket. Dragon’s earned the victory with a 3-1 scoreline. Per usual, the team aggressively adapted to the meta, quickly mastering the new, offbeat Roadhog + D.Va frontline, as well as the Sombra centric Winston dive composition, both of which have been very popular during the playoffs. The new meta tested the flexibility of the Dragon’s starting lineup and pushed the team as a whole to prove that they are still dominant outside the double shield meta which was a mainstay throughout the regular season.

The Dragons’ winners-bracket semifinal was against the surging Seoul Dynasty. Despite being the fifth seed in APAC, Seoul has proven themselves to be a very dangerous opponent during the playoffs. They swept both Spark and Charge in their rise to the top, so many were interested to see how they would perform against Dragons. Although Seoul started strong using their unique Sigma + Roadhog composition to secure a 2-1 lead, Dragons eventually mirrored the composition in the second half of the series and managed to best Dynasty with their own strategy, taking the match in a 3-2 nailbiter of a series.

With the victory over Dynasty, Dragons earned their shot at claiming the Overwatch League championship in October.

Seoul will be joining the Shanghai Dragons as the second APAC team in the final four bracket.  Throughout the playoffs Seoul has adapted exceptionally well to the new offtank heavy meta. With the exception of their close 2-3 loss to Shanghai in the winners bracket final, Seoul swept every single other match they played.

During the regular season, Seoul’s main tank Jae-hee “Gesture” Hong struggled to put up strong performances as a barrier tank. However, Gesture excelled in the playoff meta where he primarily played the off-tank Roadhog instead of a barrier tank. In another rare occurrence, Joon-yeong “Profit” Park played a significant amount of Pharah, who is very difficult to counter with the short range dive compositions most teams have been leaning toward in the postseason. Seoul’s strategy was to force other teams to adapt to what they were doing, and most of those teams came up well short.

Seoul started their Cinderella playoff run by defeating Hangzhou Spark in the knockout rounds. Coming into the playoffs, Spark were considered a legitimate challenger, however Seoul was able to dispatch the team with relative ease, taking the series in a 3-0 sweep. During much of the series, Spark elected to use a short range dive composition focused on Tracer and Reaper as DPS. Unfortunately, this left them with very few weapons to answer Profit’s pharah, leaving Profit to rule the skies for free throughout most of the match. Without a compelling answer to Profit’s damage, Spark wasn’t able to secure even a single round against the newly dominant Dynasty team.

Dynasty went on to upset the Guangzhou Charge in the winners bracket semifinal match, once again taking the series with a 3-0 scoreline. Much like Spark, Charge struggled mightily to find footing against Seoul’s playoff composition. To add insult to injury, while the playoff meta favored Seoul, it did not favor Guangzhou’s strengths at all. Guangzhou had some great moments during the 2020 season when the meta was focused on Genji dive, but without a strong Sombra player, the team found it very difficult to counter anything Seoul was doing.

Shanghai handed Seoul their first postseason loss in the winners bracket grand final, sending them down to the losers bracket final. The match was a very close 3-2 affair and could have easily gone in Dynasty’s favor. While Dynasty insisted on running their bread and butter Sigma + Roadhog team composition, Dragons continued to run their comfort strategies during the first half of the series, playing various barrier tank compositions and dive compositions. These strategies led them to a great regular season, however, Shanghai was losing the match against Seoul. Eventually they were forced to mirror Seoul on the final deciding map. Shanghai just barely squeezed out the victory on the final control point map by outplaying Dynasty using their own composition.

In their final shot to advance to the top four, Dynasty faced the third seeded NYXL in the losers bracket grand final. NYXL made some impressive matches to advance that far, including eliminating Charge from the losers bracket in a 3-0 fashion. However, Seoul was able to easily pull off the upset over New York and claim the second APAC final four slot. There is very little to say about the match beyond acknowledging the absolute dominance of Dynasty. The match performance was so dominant for Seoul that OWL Commentator Will Shroder called it the “most one sided match” he has ever commentated in the Overwatch League.

Going into the final playoff bracket, Seoul is a force to be reckoned with.