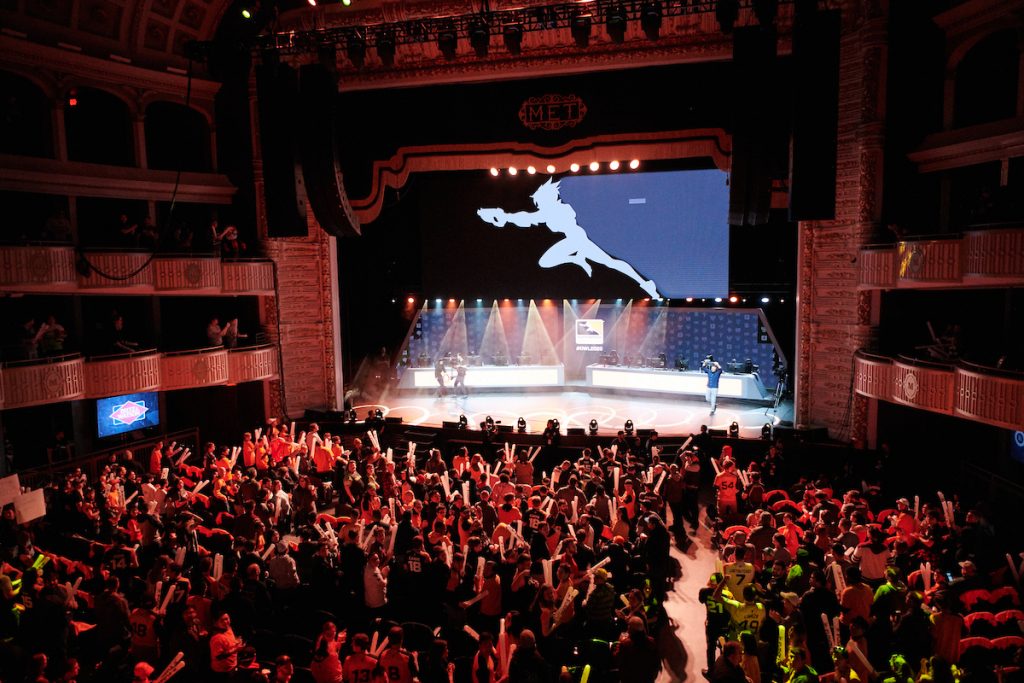 The Overwatch League playoffs kicked off on Thursday with play-in brackets for both the NA and APAC regions. The single elimination knockout tournament offered every team in the league a shot at entering the playoffs regardless of their season ranking. The Overwatch League made the decision because COVID-19 severely impacted the fairness of different team schedules, so they thought the most fair thing to do was give everyone a shot.

The play-in’s were the first chance to get a look at the developing playoff meta. The playoff meta is very different from the regular season meta, due to the large nerfs handed down to Orisa, Sigma, and other heroes which functionally killed off the double barrier meta. During the play-in matches, teams showed off strategies featuring Zarya and D.Va tank lines, Roadhog and D.va tanklines, as well as various versions of the dive composition. There is also a renewed emphasis on Mercy, Pharah, Sombra, and Reaper.

Teams who advanced during Friday’s matches earned an extra life, in a sense, since the full regional playoff brackets are double elimination.

The Overwatch League kicked off the North American play-in tournament with a match between Houston Outlaws and Boston Uprising. Outlaws entered the match the heavy favorites, in part because Boston was unquestionably the worst team in the Overwatch League during the 2020 regular season. To everyone’s surprise, Uprising showed up ready to play, defeating Houston in a 3-1 series. The victory not only shattered Houston’s playoff hopes, it also shattered everyone’s Overwatch League playoff brackets.

It's only been one match, but I'm increasingly certain we're not going to be paying anyone $100K for a perfect playoffs bracket. #OWL2020

A big part of Boston’s victory was their mastery of the new meta. Uprising looked really strong in this meta. Both Tae-hee “Jerry” Min and Kelsey “Colourhex” Birse excelled on Ashe and Tracer respectively, while Boston’s tankline looked oddly comfortable in the zero maintank strategy which both teams relied on throughout the series. The most impressive player during Thursday’s match was Sang-min “Myunb0ng” Seo, who played Ana. Myunbong not only put out a truckload of healing, he also landed key sleeps to shut down enemy ultimates on multiple occasions. He also played a crucial role in containing and countering João Pedro “Hydration” Goes Telles’ on Pharah.

Although Boston was eliminated in the next round by Atlanta, it was good to see that even the worst team in the league is capable of turning things around and securing a playoff victory.

The Washington Justice punched above their weight class to win both of their play-in matches on Thursday and Friday. Not only did they win their matches to earn a place in the full playoff bracket, they ended up going undefeated during both series.

Justice have had a rough 2020 season, losing multiple star players and making sweeping organizational changes throughout the season. However, their playoff prospects skyrocketed when they signed Gui-un “Decay” Jang to a playoff contract after he was released from Dallas Fuel in August. Decay is unquestionably one of the best DPS players in the league, so there was a lot of interest to see how he would fit into the Justice’ system. He did not disappoint. He came out on Thursday playing Zarya, a tank character he formerly mained during the GOAT’s meta. Throughout both series, his Zarya was unstoppable.

Justice were the slight favorites going into Thursday’s match against Titans. The young Titans roster has struggled to find a footing during the 2020 season. Although they found some success during the summer Genji meta, they are widely considered to be one of the worst teams in the league despite being a higher seed than Justice. Washington easily rolled over the team to advance to the second play-in round.

Friday’s match was a much more interesting affair. Fuel came into the bracket with the eight seed, while Justice were the 12 seed. However, since Fuel had just lost their star DPS, Decay, to Justice, the match was pretty personal for Decay, whom Dallas threw under the bus when they released him. The former Fuel player was out for blood, and boy did he get it. Fuel were not able to find an answer to Washington’s aggressive Roadhog and Zarya composition.

With two impressive performances in a row, Justice are a dark horse candidate to keep an eye on as we move forward in the playoffs.

Los Angeles Gladiators narrowly defeated Defiant 3-2 in their match on Friday, advancing to the playoff bracket proper. Gladiators were the favorite in the match, but Toronto was definitely a respectable opponent. Although Defiant didn’t have the greatest season, they did make a run to the semifinals of the summer showdown, so this match was not a gimme for the L.A. team.

Both Gladiators and Defiant ended up running a Winston centric dive composition, a strategy which was popular during the recent Korean Contenders tournament which was also played on this playoff patch. The two teams traded the first four maps evenly, leading to a final map on Lijiang Tower.

Ji Hyeok “Birdring” Kim was sick during the match, so he ended up sitting out some maps. When he did play, Birdring looked absolutely dominant, swinging the match into Gladiators favor several times. On the final map, Birdring put on a fabulous performance, earning himself the player of the match. Overwatch League broadcaster Sideshow compared the performance to flu ridden Michael Jordan’s performance in the 1997 NBA finals. After the victory, Birdring fainted, but luckily he had already secured the win. For those who are concerned, Birdring is fine and reportedly went back to sleep after the match.

A thread on Birdring and player health: https://t.co/PjwTYa4HP9

Despite having a rough start to the year, Los Angeles made a resurgence leading up to the playoffs. They managed to climb from the middle of the pack all the way up to sixth seed in the NA playoffs, just barely surpassing Atlanta Reign in the final week of the regular season. Their victory on Friday secured them a place in the proper playoff bracket, which is already a huge accomplishment for L.A.

Although Atlanta Reign stumbled throughout the final weeks of the regular season, they still managed to defeat a surprisingly dangerous Boston Uprising team on Friday to advance to the full playoff bracket.

Although many teams have been favoring experimental and dive compositions in the playoffs so far, Reign relied on their well practiced tank line of Reinhardt and D.Va. Although the tanks composition may not be optimal, Blake “Gator” Scott and Xander “Hawk” Domecq are so dominant and well-practiced on their brawl compositions that they were able to make it work anyway. Tae-hoon “Edison” Kim’s also looked strong on DPS, flexing between Reaper, McCree, and Tracer throughout the match. After struggling over the past few weeks, it was good to see Reign’s hitscan player back on track.

It is unclear if Reign will be able to find success using this brawl composition during the rest of the playoffs, but it worked against Boston, which is all they needed on Friday.

APAC kicked off their play-in tournament on Thursday with a match between Chengdu Hungers and London Spitfire. Chengdu was able to easily advance over Spitfire.

Unsurprisingly, Chengdu continued to run whatever they wanted to, regardless of what the meta might dictate. Throughout the match they ran out of the meta tanks like Sigma and Wrecking ball, they ran Hanzo on their DPS line, and they ran Zenyatta instead of Ana. All of these heroes were diversions from the dominant strategy, which is what Hunters have become known for. They were able to make their unconventional ideas work against Spitfire, and even almost defeated NYXL on Friday.

Although Hunters were eliminated in the play-in tournament, it was still a feather in their cap to take home the victory over Spitfire. Regardless of what has been thrown at them in the 2020 season, Chengdu has continued to play the game the way they want to play it, and that is admirable in its own way.

After a decent season, Hangzhou Spark were eliminated from playoff contention by Seoul Dynasty on Friday. Dynasty swept the series 3-0, earning their place in the APAC double elimination bracket.

Seoul players straightforwardly outmaneuvered Hangzhou’s players throughout the match. Seoul seemed to have an answer to every strategy Spark had prepared, even when they switched things up nothing seemed to work. Spark players even played really well from a statistics standpoint, but Dynasty were magnificent and earned the win through raw execution and better teamwork.

Dynasty have been a wildcard this year. Although they have gone to great heights like reaching the Grand Finals of the May Melee where they nearly defeated Shanghai Dragons, they also have proven to be rather untrustworthy, often losing matches they probably should win. The biggest thing Seoul has going for it is the flexibility and skill of their individual players, especially Min Seo “Marve1” Hwang, Jae-hee “Gesture” Hong, and Junyoung “Profit” Park. These veteran players definitely have the skills to go far in the playoffs, all they have to do is execute their teams strategies well, like they did on Friday.

After losing the Hunters a few weeks ago, NYXL took their revenge by eliminating Chengdu from playoff contention in a 3-2 series on Friday. Although NYXL successfully advanced over the lower ranked Hunters, Chengdu did not go down without a fight. Not only did the match go all five maps, some of the maps were hotly contested.

Both teams ran variations of Hammond and D.Va dive compositions and Winston and D.Va dive compositions. The resulting match was filled with fast-paced action and was reminiscent of the inaugural season playoffs back in 2018. Both teams played really well, but the difference maker ended up being Dong-gyu “Mano” Kim’s Winston performance. He was ever so slightly more effective than Ding “Ameng” Menghan’s maintank, which made the difference for the very close series.