San Francisco Shock Are Headed to the OWL Finals 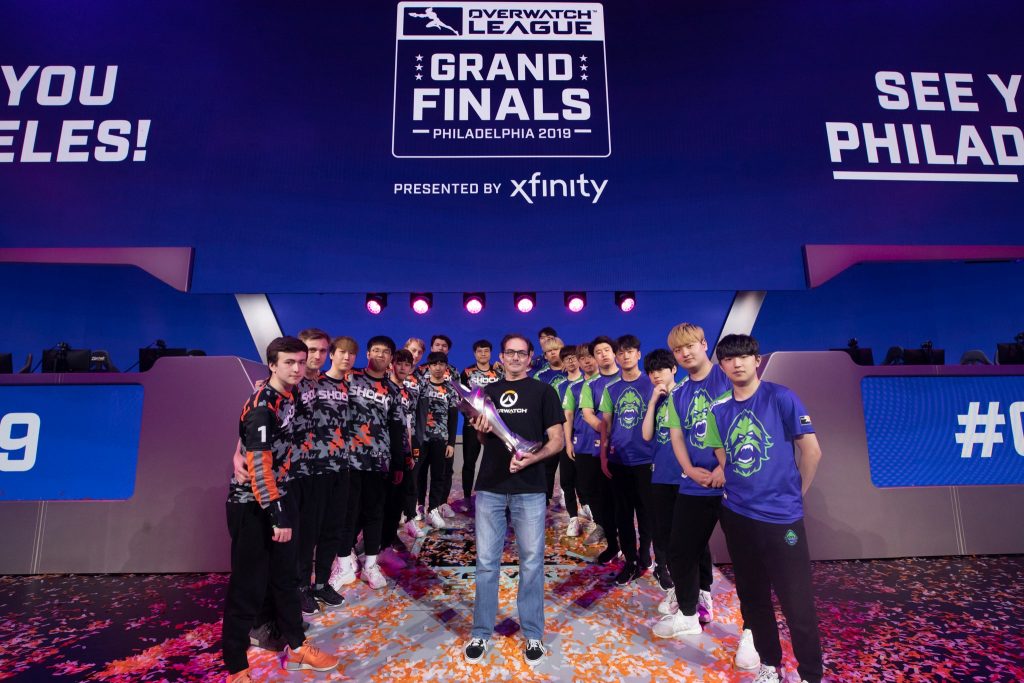 The San Francisco Shock will meet the Vancouver Titans in the OWL finals. (Image via Blizzard Entertainment)

The San Francisco Shock squared off against the New York Excelsior Sunday afternoon to decide who would punch their ticket to the Overwatch League Grand Finals in Philadelphia. After a blistering run through the Loser’s bracket, the Shock looked nigh unstoppable. They continued their excellent form against New York, ultimately completing a perfect run of 4-0 sweeps through the lower bracket to win the last spot in the OWL finals.

SEE YOU IN THE @OVERWATCHLEAGUE GRAND FINALS!!! 🥊 pic.twitter.com/nIalbyrUtY

The teams met first at Lijiang Tower, where the Sigma/Orisa trend continued for both sides. New York and San Francisco each took a point, but San Francisco took the tiebreaker round for an early 1-0 series lead.

Map two, King’s Row, was marked by an excellent defensive performance by the Shock. After completing their attack with time to spare, the Shock made an almost perfect hold under the archway past Point 1, shaving several minutes off of the clock for NYXL’s attack.

Jay “Sinatraa” Won’s last-minute switch to McCree completely shut down the Excelsior’s last-ditch efforts to take Point 3 and gave his team’s backline the protection they needed to keep their tanks alive through the fight. Their patient play and ability to capitalize on positioning errors by the NYXL helped close out the map 3-2.

Temple of Anubis was action-packed from beginning to end, with double-overtime being required to settle the score. New York actually looked pretty good on Anubis at first, finishing the map with a solid 2:13 in the bank. San Francisco were up to the task, however, and completed their first run through the map with an even 3:00 remaining. NYXL hit back with what must have been an OWL record second cap, with 54 seconds still to go upon capturing point 2 a second time.

For defense, New York tried running a Mei to stall the Shock, which forced San Francisco to burn all of their allotted time in order to complete the map again. NYXL’s final attack looked strong through Point 1 once more, but they were stopped before capturing Point 2 by an amazing play courtesy of Sinatraa’s Doomfist. San Francisco once again completed the map to take a 6-5 win and put them in prime position to secure another 4-0 sweep on their way to the Grand Finals.

Desperate for a win on Rialto, the Excelsior subbed out Haeseong “Libero” Kim for Yeono “Flow3r” Hwang in an attempt to use Pharah to stymie the Shock’s seemingly unstoppable Doomfist/Reaper combo. To New York’s dismay, the Shock pulled out Minho “Architect” Park’s Bastion and tore through the Excelsior’s defense with a wicked fast 3:21 remaining. NYXL tried to replicate San Francisco’s success on Bastion by assigning Jong-Ryeol “Saebyeolbe” Park to the hero. Unfortunately for New York, the defense had their number and prevented them from capturing Point 3 and securing yet another clean sweep for the Shock.

With the completion of the Loser’s bracket, the stage is now set for the Overwatch League Grand Finals in Philadelphia. The Overwatch League trophy and a US$1.1 million prize pool are on the line, and the Vancouver Titans have a chance to take home the prize despite being an expansion franchise. These two teams have been regarded by many as the two best teams that the Overwatch League has to offer, and neutral fans will have an excellent show come OWL Finals time. The San Francisco Shock will take on the top-seeded Vancouver Titans on Sunday, September 29 live on Twitch, Disney XD, and ESPN.

Other Overwatch
Share
Ryan Hoskins
Ryan is an esports journalist and coach. When he's not coaching or writing, he enjoys shoutcasting and playing League of Legends and Overwatch. Outside of esports and gaming, Ryan enjoys playing soccer and reading classic literature.
Follow me