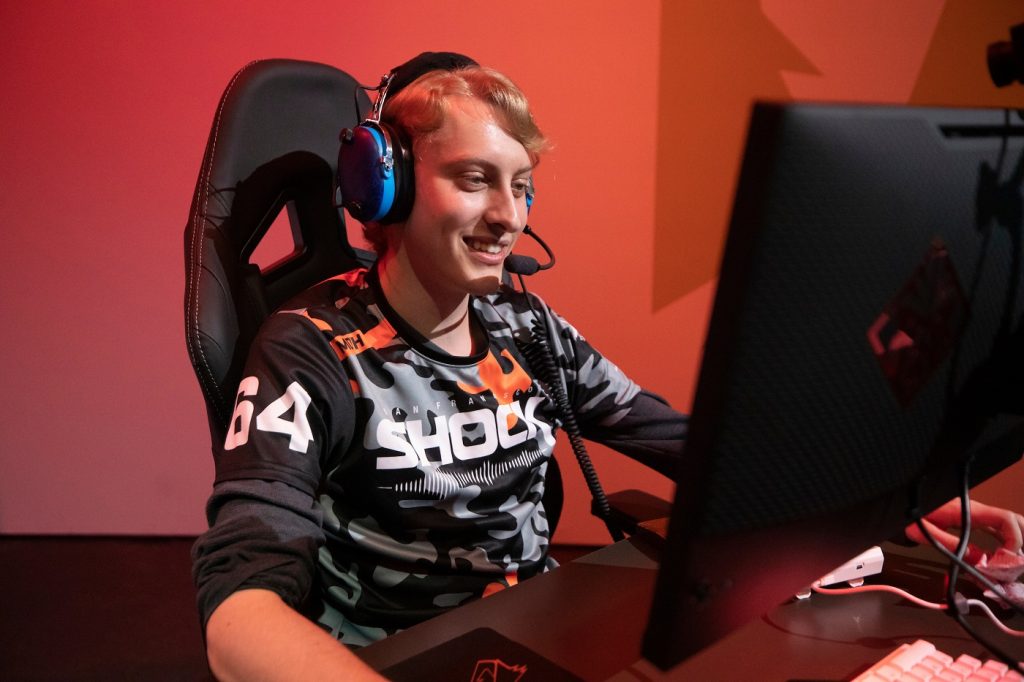 Grant “moth” Espe, a three-time Stage Finalist, Support Role Star, and a member of the United States World Cup team is working to add Overwatch League Champion to his long list of accomplishments. The main support has been an anchor for the San Francisco Shock throughout their season, his Lucio especially shining in the GOATS meta where the Shock achieved a perfect 28-0 Golden Stage.

However, the Atlanta Reign upset the Shock in an intense 4-3 match, sending San Francisco immediately down to the Losers’ Bracket. Since then, the Shock have rebounded quickly, defeating the London Spitfire 4-1 and sweeping the Los Angeles Gladiators 4-0.

With the Shock’s rivals, the Vancouver Titans, securing a spot in the Grand Finals, moth and the Shock must win against the Hangzhou Spark and New York Excelsior. Moth spoke to Hotspawn directly after his victory over the Gladiators, sharing how the Shock recovered from their loss and what it would mean to him to make the Grand Finals.

Hotspawn: Congratulations on the victory over Gladiators, in a 4-0 sweep. Are you feeling more comfortable with this meta as playoffs continue?

moth: Yeah, I think after the first week we had a little bit of time to prepare and we got a better understanding of the meta, now that we’ve had time.

How does your preparation vary between the regular season and playoffs?

It’s not really any different than the regular season. Just four hours of scrims a day with VOD review all over the day. We do a ton of prep on positioning, strategies, and compositions.

You’ll be playing against the Hangzhou Spark on Saturday, how do you feel about that matchup?

I think that’s a really good matchup for us. Even though Spark beat Atlanta really dominantly, I think Atlanta is a harder team for us. So we’re really confident playing against the Spark.

Why would Atlanta be a more difficult team to face?

It’s playstyle. They’re really aggressive, and even not just in this meta, in other times we’ve played Atlanta we’ve always had really close matches with them. I think it has to do with how they play onstage versus in scrims, and how aggressive they are. Whereas a team like Spark, we’re more confident against them, I think we have a better read against them.

I made role stars :] pic.twitter.com/t7be9z6X6w

How did the Spark mentally recover from dropping to the Losers’ Bracket?

We just put that loss behind us. [The match against] London was a tough day for us, because we had back to back days of matches. But now we just have to put that behind us and focus on the matches we still have to play.

When you have so many matches in a short time period, does Shock’s preparation revolve entirely around your own teamplay? How much can you incorporate opponent-focused strategies?

Which team would you have to tailor your preparation for the most out of the remaining teams?

Vancouver. I think they’re the best team right now, besides us.

Would you like to meet them in the Finals?

I don’t really mind, we have to beat every team to win the whole thing, so order doesn’t really matter.

Please welcome the support duo to our 2019 starting roster!

Soon after Overwatch League Playoffs, you will have the opportunity to play for Team USA at BlizzCon. How does the preparation for a national team differ from how you’re prepping during playoffs?

It’s not nearly as rigorous. World Cup has a lot lower importance for all the players than Overwatch League. We’ll be boot-camping before World Cup starts for a week, and because we’re all over, we might do some online scrims before that. We’ll come together for a week to really grind hard for those matches, but it’s also a lot less indepth preparation because you also have to build synergy and teamplay over such a short period of time. So the strategy might not be as high-level as an Overwatch League team.

Do you think the meta will have any major changes between now and BlizzCon?

I don’t know, it’s impossible to tell, I’m not sure what Blizzard is going to do. But I’m sure there’ll be some balance patches after this season is over.

If you could decide where those balances could be made, what would you do?

Nerf shields, Orisa and Sigma are too strong, and DPS like Mei, Reaper, and Doomfist have too much survivability and mobility right now. I don’t think I’d make any changes to supports right now, it’s a pretty good meta for them, there’s lots of flexibility.

What would it mean to you to make the Overwatch League Grand Finals?

It would be incredible. I’ve come so far since I started, even before Overwatch League Season 1, like grinding from the bottom of Tier 3, just playing casually, up until getting signed into Overwatch League when I really didn’t expect it. Then working hard all of Season 2 to make Shock a top tier team, It would be amazing.