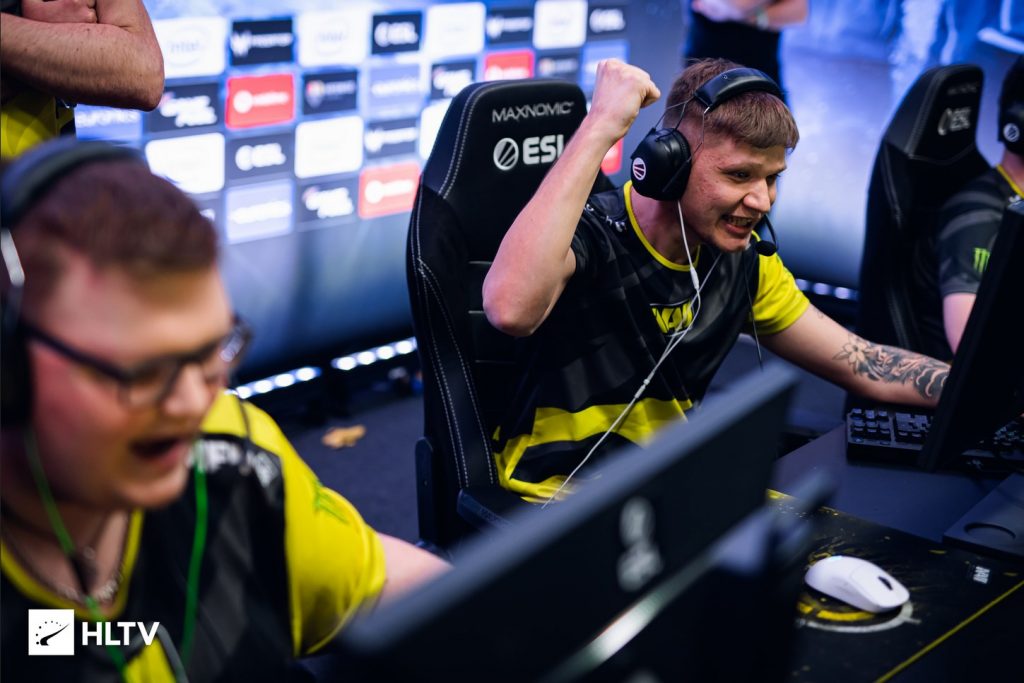 Na’Vi have finished with a 6-1 record, earning a top seed in the ESL Pro League S12 Playoffs. (Photo courtesy HLTV)

The final week of ESL Pro League Season 12’s Group Stage has come to a conclusion. Of the 16 teams that entered the ring, only eight have advanced to the playoffs for a chance to win it all. There were many notable exclusions among the advancing teams, making for a very interesting bracket to come. Eventually, Na’Vi and Astralis came out on top of their respective groups.

Although not as stacked as Group B, Group A still had some tough competition. Na’Vi came into Pro League hoping for a revitalization after their unceremonious Group Stage exit at ESL One Cologne. Week one saw the CIS squad go 2-1 with a bad loss to ENCE, but a crucial sweep of BIG. Their ensuing 2-0 week against AGO and OG put them in good position to secure the top seed going into their final matches.

Going into week three, there was the possibility of a massive tiebreaker among the top four teams. In order to put themselves clear of it, Na’Vi needed to take down Heroic who were coming off of an undefeated week two. Overpass was the first map, courtesy of the Danes. After losing the first three rounds off of pistol, Na’Vi held strong to take 10 of the last 12.

Na’Vi even lost the second pistol round as well. It hardly mattered, as they force bought and ran through Heroic’s CT side. Six rounds in a row led to a dominant 16-6 finish with no pistol round wins. The whole team was on point, especially Aleksandr “s1mple” Kostyliev who earned a 28-11 K-D ratio, 124.2 ADR, and a 1.95 HLTV rating.

All Na’Vi needed to do was close out on their Nuke pick. The early rounds went back and forth with Na’Vi winning out in the end. They earned a 5-3 lead from T side before Heroic had proper weapons to fight back with. Heroic did stabilize in the end, bringing the score to 8-7 at the half.

Although Heroic flew out of the gate on their own T side, Na’Vi were able to bring the game back from the brink. A 15-9 lead for Heroic turned into overtime. Unfortunately for Na’Vi, the 2-0 sweep was not meant to be. Despite some amazing play by s1mple, Heroic were able to take the 19-16 to force a third map.

Both teams now fought for their first seed dreams on Train. The game was close from the get-go, with no squad ever earning a lead of more than three points. Heroic once again got an 8-7 first half result. They also won the second pistol round and had a chance to take control of the game. Instead, Na’Vi kept the score close the whole time. Tied at 14 apiece with both economies on the line, Denis “electronic” Sharipov found three kills in Pop Dog to hit match point.

Na’Vi went on to win the last round and earn the 2-1 victory and a guaranteed first seed finish. After the loss, Heroic had to beat OG on the final day to secure the final playoff spot. Luckily for them, OG was not up to the task. Heroic outclassed their opposition with a 16-12 win on Inferno and a 16-9 win on Nuke to finish with a 4-3 record and fourth seed in the group. OG have missed out on playoffs despite having the third best round differential at +23. Elsewhere in the group, BIG took a 2-1 victory over ENCE to earn second seed for themselves. A third place finish for ENCE is definitely acceptable for them based on expectations coming into Pro League.

The big shock of the group is G2 Esports. Not making it to the playoffs would have been a disappointing but understandable result in a vacuum. However, G2 started out with a 2-0 record in week one. They then lost five games in a row and fell to the bottom of the table alongside GODSENT and AGO. The French-Serbian squad is going to have to go back to the drawing board after this performance.

Week three featured the bulk of the matches in Group B. A total of 12 contests were held to determine which four teams would advance from the group. With each team playing three BO3’s in five days span, proper planning was imperative.

Astralis proved to be the best in that regard. They were the only team to win every match and did so with flying colors. Their round differential went up by 45 in just the final week, leaving their end total at +70. Ninjas in Pyjamas, Fnatic, and Team Spirit were all no match for the Danish giants. With just one overall loss to Complexity, Astralis’s 6-1 record has them through to playoffs in first seed.

Right behind them is Complexity with a 5-2 record. Coming into the final week, the juggernaut had a chance to complete an undefeated run in the Group Stage. However, they hit a bump in the road early with a 0-2 loss to mousesports. Still, Complexity was able to adjust and swept Vitality the very next day to earn their fifth win. Despite dropping a close series to FaZe Clan in their final match, Complexity’s second seed has been locked.

With the top two spots locked, only two remained for the four teams still in the running. Spirit was one of many teams with a 2-2 record coming into the final week. On the first day, they took down FaZe Clan with a reverse sweep. The CIS squad then had to contend with mousesports hot off their Complexity upset. They did so with a convincing 2-0, bringing their record to 4-2 and securing a playoff spot.

The number one team in the world, Vitality, also held a 2-2 record with three matches to play. They did manage to start strong with a sweep of their direct competition in Fnatic. Their loss to Complexity then put them at a .500 record once again. Luckily for Vitality, mousesports were also dropped to 3-3 by Spirit the day after. The final playoff spot would go to the winner of their contest on the final day.

The match began on mousesports’ pick of Nuke. Right off the bat, the game looked incredibly one sided. Mousesports attack completely dismantled Vitality at every point. Even when the French side found a good opportunity, they were quick to give it up.

The half ended 11-4 for mousesports, signaling what should have been an easy close out. However, the map would drag on for much longer than expected. After mousesports found an early 15-7 map point, Vitality went on a 7 round win streak. The deficit somehow closed to one as Vitality needed just one more to force OT. Unfortunately for them, mousesports found the most important round of the game and secured the 16-14 win.

Close call aside, mousesports just needed one more map to earn a playoff berth. Vertigo was up next. Mousesports started off just as well as they did on the previous map. Their CT side looked much improved from Nuke as they took a 10-5 lead at the half.

Vitality needed another massive comeback if they wanted to stay alive in the series. They managed to win the pistol round, but couldn’t find their flow on the CT side. The match quickly spiraled out of reach for them as mousesports tore into their defenses. Mousesports felled the French favorites with the 16-8 victory, sending them home while advancing themselves.

Joining Vitality on the sidelines from Group B are Fnatic, FaZe Clan, and NiP. All three squads came into the event ranked in the top 15 worldwide and all will consider their performance inadequate.

With that, the top eight teams at ESL Pro League Season 12 have been finalized. Playoffs will begin in just over a week on September 29th. The matchups are as follows:

The bracket will be double elimination with the Winner’s Bracket victors getting a one map lead in the Grand Finals. No squad can really be looked at as overwhelming favorites. The door is wide open for anyone to take home the trophy and the $75,000 first place prize.