LoL 2019 World Championship: All You Need to Know 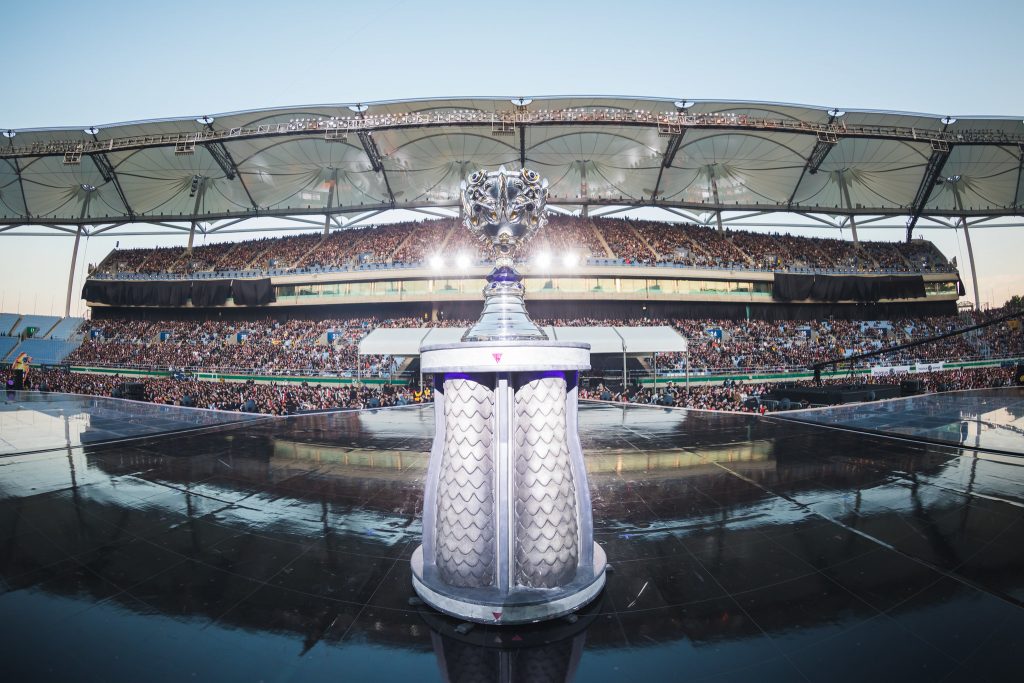 The League of Legends 2019 World Championships unfolds over multiple stages in October and November. (Image via Riot)

The stage is set in Europe for the League of Legends 2019 World Championship. 24 teams from around the globe will compete for the Summoner’s Cup, prize money and the right to have their legacy immortalized within the game in the form of team skins. The tournament kicks off in Berlin, Germany on October 2, and will cap off in Paris, France on November 10.

The format for Worlds will consist of four different stages: the Play-In Stage, Main Group Stage, Knock-Out Stage and Finals.

The Play-In Group Stage spans from October 2-5 at the League of Legends European Championship (LEC) Studio in Berlin, Germany. Competing teams will be drawn into four groups of three and play a double round-robin within their group. The top two finishing teams in each group will then advance to the Play-In Knockout Stage.

Placement into Play-Ins is based on a region’s performance at past international events. Since China won both the Mid-Season Invitational and the World Championship in 2018, for example, no teams from the League of Legends Pro League (LPL) will participate in Play-Ins this year. Seeds from the following regions go through Play-Ins in the 2019 World Championship.

The Main Group Stage takes place October 12-20 at the Verti Music Hall in Berlin. 16 teams will be randomly sorted into four groups of four based off of seeding in the Group Draw Show on September 23.

For the sake of ensuring balance, teams will be divided into pools once again based on their region’s past international success. Each group will consist of one “pool one” team, two “pool two” teams, and one “pool three” (Play-In) team no matter what. Just like the Play-In Group Stage, this stage will also use a double round-robin format. The following teams will auto-qualify for the Main Group Stage.

The third pool for groups will be made up of whichever four teams make it out of the Play-In Stage.

Following groups, the show will pack up and head over to the Palacio Vistalegre in Madrid, Spain from October 26-November 3 for the Knock-Out Stage. This section of the tournament is broken into two parts: Quarterfinals (October 26-27) and Semifinals (November 2-3). The bracket is single-elimination, and no teams from the same group can end up on the same side of the bracket.

In Quarterfinals, the top eight teams from the tournament will play in four best-of-five matches. First-place teams from the Group Stage will face off against a random second-place team from a different group. The two winners from a given side of the bracket will go on to play each other in the Semifinals.

The journey ends in Paris, France, where the Finals will take place on November 10 at the AccorHotels Arena. The last two teams standing will play in a best-of-five series for a shot at being the title. The winning team will be crowned world champions and hoist the Summoner’s Cup.

The victors will also win prize money and have the honor of collaborating with Riot to create a line of team skins for their preferred champions that will go on sale sometime in 2020. The official prize pool has yet to be announced.

If you’d rather watch in person, you can learn where and how to purchase tickets here. Tickets for the majority of Worlds went on sale August 30 and sold out the same day, but tickets for Finals will be available for purchase on September 15.