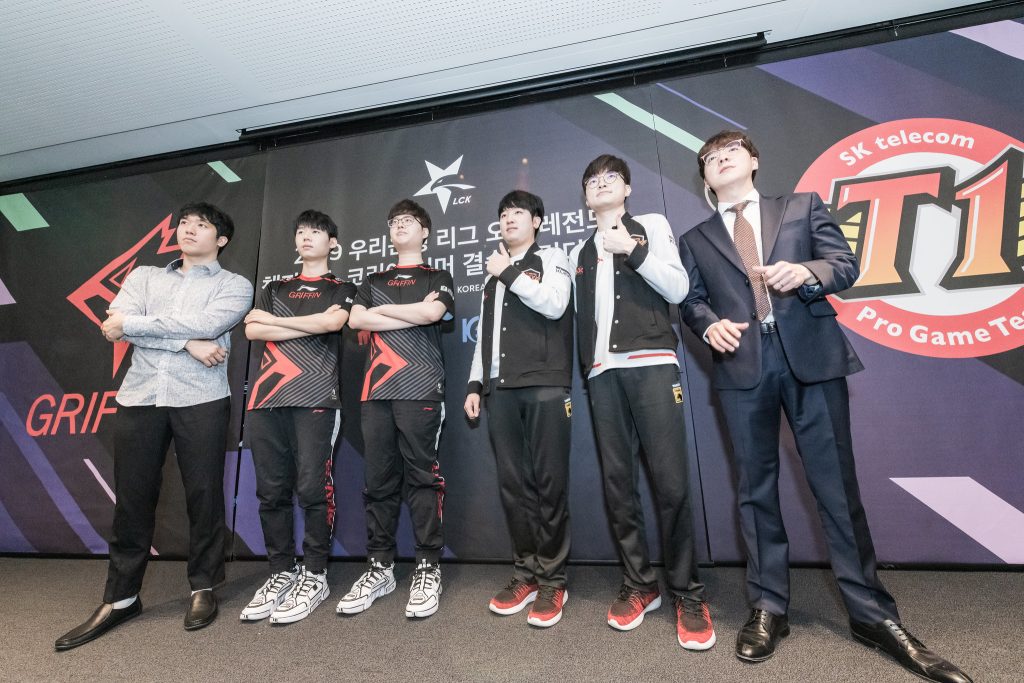 SK Telecom T1 defeated Griffin three games to one to win the League Champions Korea (LCK) 2019 Summer Championship. It is the second straight title for SKT, who also defeated Griffin 3-0 in the Spring Season finals. Their playoff runs locked both in as the top LCK representatives for the 2019 World Championship.

SK Telecom T1 had shown promising signs of a renewed synergy between their mid-jungle duo of Lee “Faker” Sang-hyeok and Kim “Clid” Tae-min. The pair wasted no time proving they were still on the same page in the finals, as they combined to pick up the first two kills of the series on Jeong “Chovy” Ji-hoon. Faker’s Renekton Ruthless Predator stun twice was chained into Clid’s Elise Cocoon so that Chovy had no way to escape. That middle of the map dominance gave SKT total control of the early game.

How well did SKT transition that early lead? SKT didn’t concede a single kill and were a Griffin turret take away from a perfect game. SKT controlled the vision, the pace, and the map throughout. Clid’s Elise finished 4/0/5 as the most influential player on the map in SKT’s opening 34-minute win.

After falling behind early and never recovering in game one, Griffin tried building a more early-game focused team in game two by picking away Elise for Lee “Tarzan” Seung-yong. SKT were disciplined and didn’t present any opportunities to Tarzan, content to scale up to the late game with Camille, Akali, and Sejuani. Griffin eventually found their first kill of the series, but it took until 29 minutes and SKT had already built a 4k gold lead with the better scaling composition. That means it took Griffin 63 minutes to pick up their first kill of the series.

A 26-minute snipe of Park “Viper” Do-hyeon’s Ashe by Park “Teddy” Jin-seong’s Ezreal allowed SKT to grab Baron and take command of the game. Kim “Khan” Dong-ha’s Camille and Faker’s Akali couldn’t be contained in side lanes — except for the time Faker tried to dive Chovy’s Sylas. Clid once again finished with a perfect K/D/A and one kill or assist from perfect kill participation, while Teddy lit up the damage charts with 22.3k damage dealt.

Griffin did not roll over, despite their reputation for falling short in big matches. They stuck to their guns, leaving Choi “Doran” Hyeon-joon in top lane and continuing to try to find early game play makers, rather than fall back on the scaling picks they were once known for. Tarzan was able to make plays happen early in the game this time, executing multiple top lane turret dives with Son “Lehends” Si-woo’s Shen.

SKT were clearly uncomfortable with Lehends’ global presence and Griffin ran away with the game by continually attacking Khan. Doran’s Jayce was handed a large lead and he didn’t disappoint, dealing 15.9k damage to poke out SKT on sieges and to secure objectives for Griffin. Chovy’s Renekton finished 4/0/4 in Griffin’s 35-minute bounce-back win.

Game four was all SKT. Griffin gave Teddy and Lee “Effort” Sang-ho the Xayah and Rakan duo, hoping to counter pick with Volibear, instead of returning to the Shen that was so impactful in their game three win. That counter pick did not work out. SKT continually sent members bot lane to take advantage of Volibear’s immobility and SKT never trailed in their title-clinching win.

Teddy’s Xayah finished 8/0/9 with the most damage dealt in the game — 19.7k. Lehends’ Volibear finished 0/6/3 and and Viper’s Kai’Sa was unable to reach half of Teddy’s damage output. SKT outdrafted and outplayed Griffin in every facet to become back-to-back LCK champions in their 29-minute win.

This is what SKT were hoping for when they rebuilt their roster around Faker in the 2018 offseason. Though they ended up substituting Cho “Mata” Se-hyeong out for Effort in the Summer Season, it’s all worked out in the end for SKT once again. Clid has given Faker the playmaking jungler he’s been missing since the departure of Han “Peanut” Wang-ho in 2017, dominating the LCK playoffs to be named tournament MVP.

Teddy has been everything he was hyped up to be when he was stuck on a floundering Jin Air Green Wings in 2018. Khan has had plenty of struggles in 2019, but he still gives SKT big time experience and is one of the best carry players in the world when in form. This version of SKT has a legitimate chance at a World Championship title.

ANOTHER DISAPPOINTMENT FOR GRIFFIN

Despite being the most dominant team in the LCK regular season since they entered the league in the 2018 Summer Season, Griffin have come up short in their most important matches. This year they’ve qualified for the World Championship on Championship Points, but will they be able to perform for the LCK when it matters most? Their recent history suggests not.

It was promising to see Griffin stick to their guns with Doran, knowing they’d spent so much time preparing him to compete with the best teams in the world and adapt to a faster pace of play. But they were still crushed in every early game against SKT when Lehends was not running a global support. Picking stronger early lanes for Tarzan to attack could be a good place to start.

With SKT and Griffin locking up the first two LCK spots at the World Championship, four teams will compete for the final spot at the Regional Finals: Afreeca Freecs, Kingzone DragonX, SANDBOX Gaming, and DAMWON Gaming.

DAMWON Gaming are the odds-on favorites and get the final match, but the LCK was incredibly close at the top of the standings in the Summer Season and it wouldn’t be shocking to see any team make it through the gauntlet. The Regional Finals begin Tuesday, September 3 with Kingzone DragonX versus Afreeca Freecs.