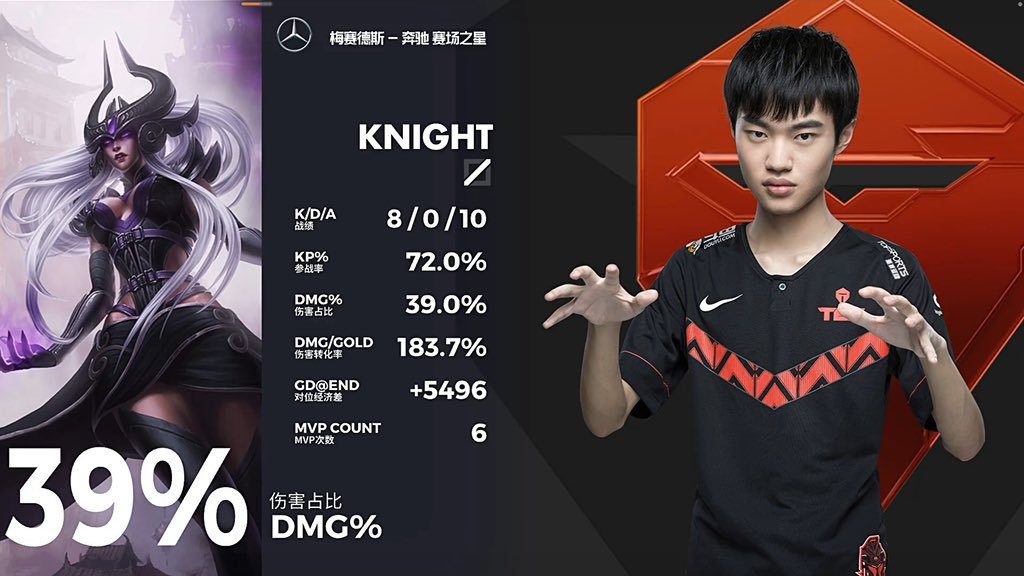 Knight earns the LPL Regular Season Summer Split MVP due to impressive performances such as this. (Photo courtesy Top Esports)

Top Esports League of Legends player, Zhuo “knight” Ding has earned the LPL Summer Split MVP award. The two-year veteran on the Top Esports roster has proven to the LPL that he is one of the best in the region as they head into the playoffs.

Top Esports has had a massive 2020 Season. The team was on the climb in the standings in Spring, cultivating in an LPL Spring Finals against JD Gaming. The team fell short back then,  but onboarding their current talent and letting them grow has only made them stronger. The likes of Yu “JackeyLove” Wen-Bo and Hung “Karsa” Hao-Hsuan are now embedded into their new environment, and the results are showing. As for the rest of Top Esports line-up, they have found themselves growing alongside their allies.

Their growth as a team has resulted in them taking the Mid-Season Cup, and in the Summer Split, they have clinched a top-two seed heading into the playoffs. The roster currently stands at the top with JD Gaming on a 13-3 record, dominating their region.

With such impressive feats over the last few months, it hard to decide on an LPL MVP. However, knight has earned that accomplishment on a variety of metrics. The LPL stats crew highlight he has a 7.2 KDA, alongside gaining 5.7 average kills a game, resulting in 211 kills in the regular season, taking first place in all three LPL Summer Split metrics. His first-place metrics continue with him topping the league on damage percentage at 35%, with the most solo kills average at 0.6, and the highest total solo kills at 22. With such feats, he also leads on the average gold difference with a 2339 tally.  As for his second-place metrics he scores on is kills at 15, which he is second with 1.4 on average. This continues with him having the second-best KDA at 15 on a 7.5 score. Meanwhile, he is third place on average cs difference with a score of 36.9, gold difference at 15 and experience diff at 15. It is safe to say this is one of the best players in the league from start to finish.

With such accomplishments, the star mid laner will return to action on August 22nd. Top Esports has a semi-final bye due to their top two seeding earned via their success in the Regular Split. The LPL playoffs kick off on August 13th, with FPX vs V5.