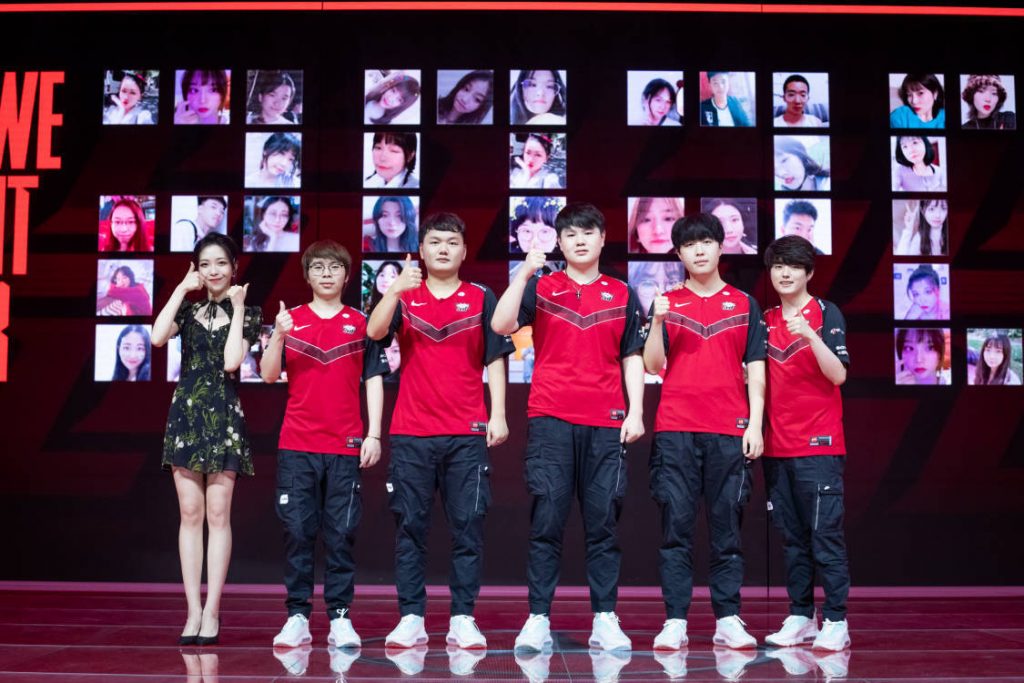 JD Gaming look to defend their Spring title after locking up a double-bye in the playoffs. (Photo courtesy JD Gaming)

The LoL Pro League (LPL) has come to an end with the tenth and final week of the 2020 Summer Split. Top Esports and JD Gaming took care of business to lock up the top two seeds, while Suning beat out Victory Five for a first round bye. Meanwhile, Royal Never Give Up and EDward Gaming missed the playoffs for the first time in a long time. We take a look at where things stand in the LPL by looking at the top storylines so far in China.

Top Esports and JD Gaming met in the Spring playoff finals, resulting in an epic five game series that earned JD Gaming their first title. Top Esports, however, were not to be outdone, winning the first ever Mid-Season Cup. The two teams entered the Summer Split as the favorites in the LPL, and now they’ll enter the playoffs as the top two seeds. Top Esports beat both eStar and Team WE to earn the first seed, while JD Gaming’s 2-0 sweep of Oh My God earned them the second seed.

Closing the regular season with 13 win-3 loss, tonight we proved ourselves with a victory and enter the #LPL playoff as the first seed🎊

Both MVPs went to JackeyLove.

Thank you fans for your support and we’ll see you guys in the playoff.#TESfighting pic.twitter.com/urvr57z01u

Team WE were a tougher opponent, so it was less surprising that TES dropped a game. It was still no problem, though, as they pulled out the series 2-1. JackeyLove played all three games on Caitlyn, going 13/1/16 in the two wins. Top Esports may have also benefited from the fact that Team WE had nothing to play for, though WE played their main starting lineup in all three games.

JD Gaming easily took care of business in their lone series of week ten. At just 4-11, Oh My God had already been eliminated from the playoffs and looked ready for the season to be over. Spring MVP Seo “Kanavi” Jin-hyeok busted out the Lillia, going 4/4/11 and 8/2/9 with a game MVP. Both Zhang “Zoom” Xing-Ran and Zeng “Yagao” Qi looked good as well, a good sign for JD Gaming heading into the playoffs.

TES still don’t look nearly as dominant as they did when they started the season 8-0, but that early streak bought them enough of a buffer to falter late and still lock up the number one seed. Even though they dropped two games and JD Gaming picked up a sweep, TES still had the better overall game record, giving them tiebreaker. TES are in a better spot than they were at this time in the Spring, as JackeyLove has had much more time to acclimate to the team and TES are firmly committed to Liang “yuyanjia” Jia-Yuan as their starting support.

JD Gaming definitely have looked better in the second half of the season. After starting the split 1-2, JDG’s only loss the rest of the way was a 2-1 loss to Victory Five. Kanavi hasn’t had quite the same dominant split he had in Spring, but that’s a minor nitpick to have. JD Gaming should be considered the favorites in the LPL heading into the playoffs.

Both Suning and Victory Five entered week 10 at 10-4, tied for fourth place in match record. Victory Five had the better game record, but both teams had two matches in the final week. Victory Five opened the door for Suning to take the lead after their surprising 2-0 loss to EDward Gaming, and Suning did just that.

We proudly present the CHADS of the Rift, Week 10… #LPL

Suning had some luck on their side when they faced FunPlus Phoenix to close the season. Not only had FPX already qualified for the playoffs, but their ADC Lin “Lwx” Wei-Xiang was ruled out late with a medical emergency. Instead, Kim “Khan” Dong-ha stepped into the starting lineup, shifting Kim “GimGoon” Han-Saem to mid and Kim “Doinb” Tae-sang to ADC. FPX put up a surprisingly good fight, including winning game two, but Suning secured the first-round bye with a 26 kill to 13 win in game three. Bin earned game MVP for his 11/0/11 Renekton game.

Unfortunately for Vici Gaming, their 2-0 loss to EDward Gaming knocked them out of the first-round bye. Despite their elimination from the playoffs, EDG’s Lee “Scout” Ye-chan showed up in a big way. After opening with a 2/1/15 Twisted Fate supportive performance, he put on a show with a 10/0/7 Akali game to close the series out. The beloved bot lane of Lee “Samd” Jae-hoon and Guo “ppgod” Peng combined to go 0/8/0 in the final game.

Victory Five would go on to beat Rogue Warriors in their final match of the season, but it didn’t matter. Suning’s 12-4 record could not be caught, even if V5 still ended the regular season with the better game record (26-15 to 25-17). Victory Five’s inconsistency showed itself again at the worst time. They will now open the playoffs in round one against FunPlus Phoenix. The 2019 World Champions will have a few days to sort out Lwx’s health and train with a replacement if necessary.

Through the years, there have been two fixtures in the LPL playoffs. The first is EDward Gaming. The organization has never missed the playoffs in their LPL history, dating all the way back to 2014 Spring. No team has been more consistent in the LPL. The second is Royal Never Give Up. Led by Jian “Uzi” Zi-Hao, RNG has made the playoffs every split going back to 2016 Spring.

Though both entered the Summer with lowered expectations, it was still expected that they would make the playoffs. Throwing out their historical records, they were still both teams that had made the playoffs just a couple months earlier in Spring. EDward Gaming beat RNG 3-1 in round one before falling to FunPlus Phoenix in the quarterfinals.

8-8.
We failed to make the playoffs in this summer, and there are lots of regrets.
Many thanks for the support from all of you.
Our journey ends here, but our story continues.
Have a rest and come back.
EDG fighting!#EDG #LPL pic.twitter.com/WygmDXYFfZ

But this time, it wasn’t meant to be. EDward Gaming were eliminated the moment FunPlus Phoenix beat Dominus Esports to open week 10, rendering their final two matches moot. EDward Gaming crushed both Victory Five and eStar 2-0, perhaps relishing the lack of pressure.

EDG, fairly or unfairly, were given the “chokers” label throughout the season for their inability to close out matches after taking game one. Of EDG’s 16 regular season matches, they won game one in 11 of them. Unfortunately, EDG converted only 7 of those for victories, winning once after falling behind to Vici Gaming. Scout remains one of the best mid laners in the world, but the team needs an overhaul around him.

While EDG ended the regular season a hot streak that came too late, Royal Never Give Up were just never an above average team. They tried roster swaps like bringing in Yuan “Cryin” Cheng-Wei for Li “Xiaohu” Yuan-Hao, Chen “GALA” Wei for Lu “Betty” Yu-Hung, and He “705” Yu-Long for Tian “New” Zhi-Peng, but none could spark the team. RNG lost to the 5-10 Bilibili Gaming 2-0 in a must-win game to eliminate themselves from the playoffs.

Unfortunately, RNG have not been the same team in 2020 without Uzi. They tried to become more aggressive with Li “XLB” Xiao-Long in jungle, but he, like most rookies, experienced plenty of growing pains. While RNG were good enough to squeak into the playoffs in Spring, they didn’t grow in Summer and were passed up by the teams that did. Like EDward Gaming, changes should be on the horizon. 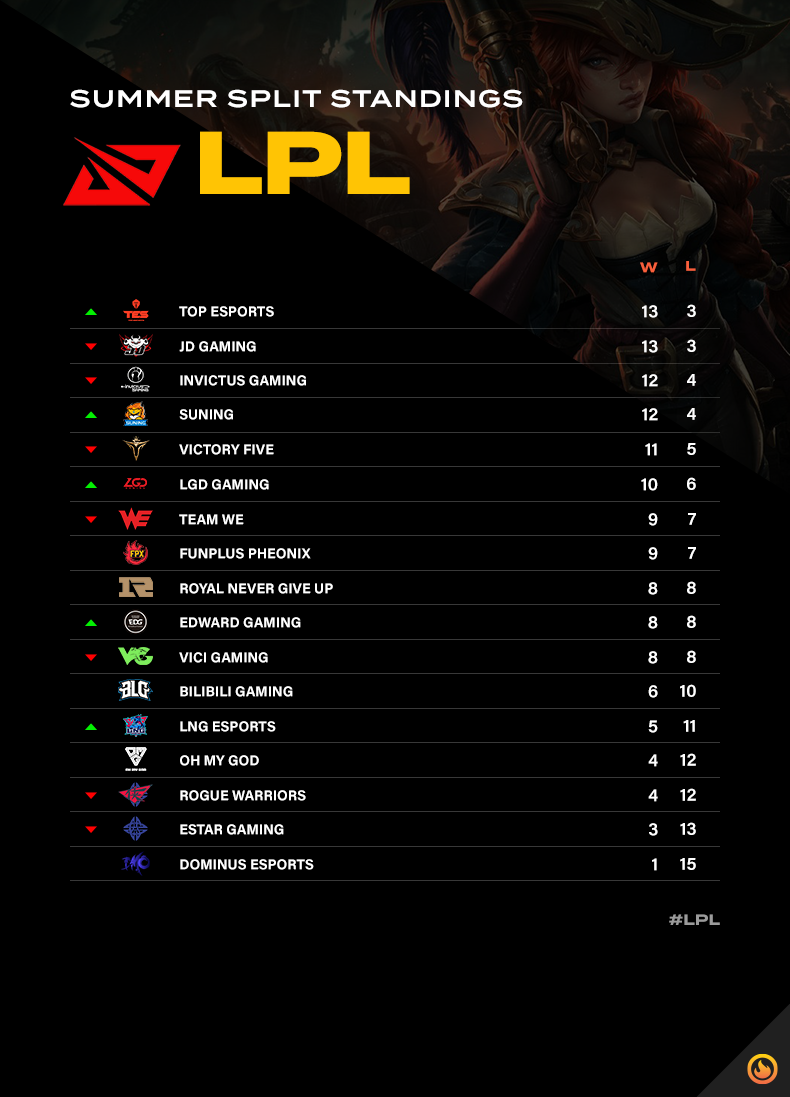 Top Esports and JD Gaming earned double byes for locking up the first two seeds, while Invictus Gaming and Suning will each get round one off. Victory Five will face FunPlus Phoenix in round one, while LGD Gaming will face Team WE.

Dominus Esports ended the season in last at 1-15, right behind the disappointing 3-13 eStar. Royal Never Give Up, EDward Gaming, and Vici Gaming all ended at 8-8, just one match out of a playoff spot.

Unlike the LEC and LCS, the LPL still uses a Regional Finals “gauntlet” for their World Championship spots, so only the winner of the Summer Split will earn an automatic Worlds berth. Eight teams will compete in the single elimination bracket to crown the champion. The tournament kicks off on Thursday, August 13th at 2 a.m. PST with a match between fifth seed Victory Five and eighth seed FunPlus Phoenix.