HellRaisers Plummet as Prodigy Pushes On in the Pushka League 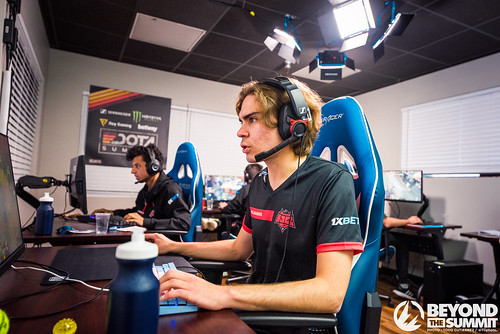 Despite lighting up the group stage with thrilling gameplay, the playoffs proved too much for Nix and the rest of HellRaisers. (Photo courtesy Beyond the Summit)

After two short days of games, we’re clear of the Quarterfinals of the WePlay! Pushka League. What’s more, with six playoff series complete, we’ve already seen a continued rise from some tournaments’ most promising talents.

VP.Prodigy, the youth arm of Virtus.pro, have asserted themselves as genuine tournament competitors, having already defeated several top European teams on their way across the bracket. But along with rising stars headed to new heights, some lights have been extinguished from the playoff race. HellRaisers, who had been one of the most dominant and exciting squads to watch in the playoffs, were unceremoniously eliminated from the event.

The most dramatic story of the Pushka League group stage had to be the rise of HellRaisers. The team, which had been rising in stock for several months in the CIS region, finally had their breakout performance, topping the table as the first team to qualify for playoffs.

As of today, though, this has all come crumbling down for the promising squad. Their playoff run started severely, with the team butting heads with the hugely developed Ninjas in Pyjamas. Against tough competition in the group stages, NiP had clung on to reach the playoffs, seeing off the likes of Team Nigma and Team Liquid. Against HellRaisers, they channeled one of their defeated foes, seemingly picking a composition oddly reminiscent of Nigma.

With their Chen/Bounty Hunter/Meepo combo, the team had a deadly set of heroes. The Chen and his zoo would create far too much pressure for HellRaisers to handle, while Bounty could roam and look for kills, and Meepo gave a final win condition. Against this horrible combination of roaming and hard-scaling, Hellraisers could do nothing. Their second game faired better, with the team able to punish each of these picks early, but NiP had added a Juggernaut to the mix, which was just more than HR could handle.

What a game! We take the series 2:0 which means that we are going to the UP Semis!#GONINJAS #DOTA2 #WePlayPushka pic.twitter.com/cxjNovd0cR

This sent HellRaisers tumbling to the lower bracket to face Virtus.pro. All signs pointed to a competitive game, at least, with HR having defeated VP in their previous group stage meeting. What’s more Virtus.pro had struggled against Team Liquid in their opening playoff match, also finding themselves 0-2 headed into this game.

But this wasn’t to be the case. In game one, VP battled back against HellRaisers’ hard push composition. Resisting the raw laning power of Lycan and the roam of Pangolier and Bounty Hunter, Virus Pro secured victory with the tried and true tactic of catching teams in massive Enigma black holes.

In game two, once again utilizing the Centaur Warrunner, Virtus.pro cruised to a more decisive victory. Despite a more competitive game, with VP’s Weaver especially giving up multiple deaths, the high-scaling Pugna and Spectre pick slowly dismantled the HellRaisers. VP eliminated their opponents with a brutal engagement that left Team Captain Alexander “Nix” Levin’s Riki unable to even participate in the final fight.

It was a sad way for things to end for a team that had shown an incredible amount of promise. But, this is also a testament to the level of play of NiP and Team Liquid, who, between each other, forced these two CIS monsters into a Lower Bracket battle for survival. Sometime’s in a tournament, it’s not the matches you play, but the ones you don’t have to play can secure your overall victory.

Living up to their Name

However, it’s not all bad news for fans of new faces and young talent. VP.Prodigy, as previously mentioned, has lived up to its namesake. The team has performed far better than anyone could reasonably expect from a youth roster, even one with LAN tested players such as Egor “epileptick1d” Grigorenko and Vitalie “Save-” Melnic in their ranks.

In their opening playoff game against Alliance, the team came out swinging, giving the EU stalwarts a run for their money. Even with one of the most potent carries in the game in Nikolay “Nikobaby” Nikolov, Alliance just weren’t able to stand up against Egor “epileptick1d” Grigorenko unstoppable Monkey King. The 17-year old carry dominated his opponents, roaming for kills, and punishing any bad positioning.

For game two, it initially looked like Alliance were in better form, as they punished the early overextension of Prodigy that had worked so well before.

But this victory was short-lived. Even after only gaining a small gold lead, Prodigy was able to use their superior team fighting to punish the Chen and Pangolier picks, which never really got off the ground. This was another breakout game for epileptick1d’s Monkey King, and teams will likely be banning this hero in the first few phases of upcoming matches.

After sending Alliance to the lower bracket, Prodigy faced NiP in what was expected to be another tough and close matchup. But yet again, the youthful side proved doubters wrong. Game one and two contained very different picks but very similar strategies. In both games, the Prodigy sold out their offlane almost completely, entirely focusing on getting stand-in Rostislav “fn” Lozovoi and epileptick1d as ridiculously fed as possible. This was facilitated by outstanding play from the rest of Prodigy, including Vitalie “Save-” Melnic living up to his name with some clutch plays.

Ultimately Prodigy would be victorious in a fairly significant upset. What has been most impressive about these victories has been the fact that VP.Prodigy looks like a fully-realized team. The squad drafts well, adapts to strategies, as they did against Alliance, and has the raw play-making ability to pull off these huge victories.

The next two days will see Alliance and Natus Vincere, where were defeated by Team Secret, battle to survive an elimination match. We’ll also wrap up the Semifinals and get a better picture of who’ll be headed to the finals of the event. We know VP.Prodigy is already set for the Upper Bracket Final, but it’s whether Team Liquid or Team Secret will be joining them.

The WePlay! Pushka League continues over the weekend, wrapping up on Tuesday evening. You can catch all the action on WePlay! ‘s official Twitch channel.