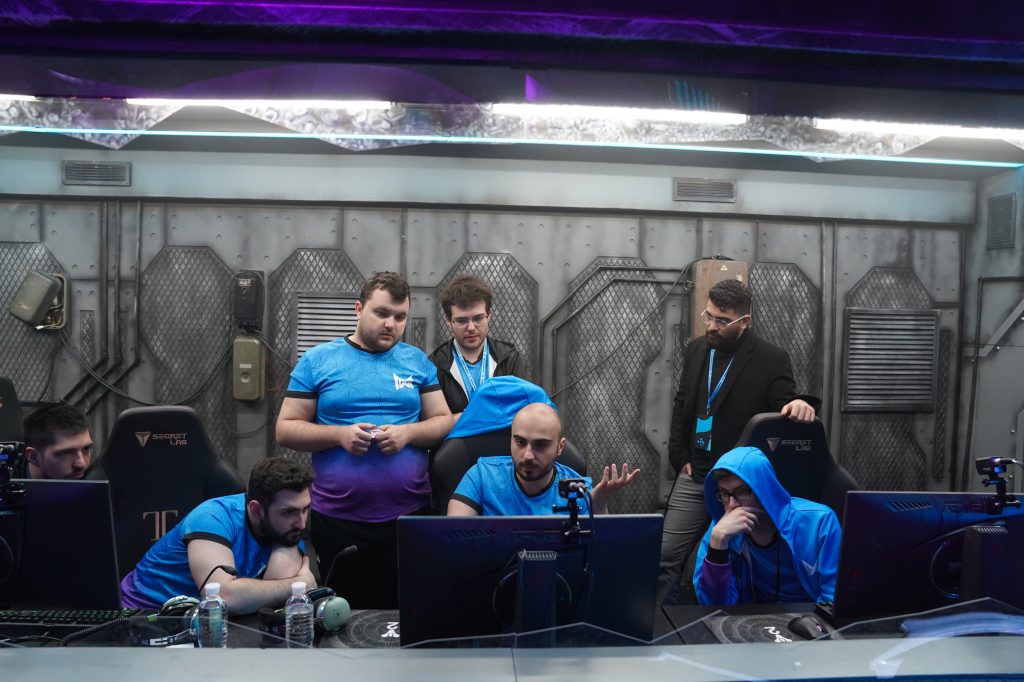 Team Nigma found themselves eliminated and on the verge of relegation on the final day of group stage play. (Photo courtesy Nigma)

The group stage of the inaugural WePlay! Pushka league is all wrapped up, and after two weeks of thrilling action, we now know our eight playoff teams from each region. After a crazy few final days, we say goodbye to B8, Nigma, OG, OG.Seed, Team Spirit, and Fly to Moon, as big names like Na’Vi and NiP narrowly escaped elimination from the event completely.

As mentioned in our first breakdown of the group stage, in Europe, some significant teams were struggling, while in CIS, there were a lot of familiar faces on the top of the bracket. For the most part, this hasn’t changed, but with a few new wrinkles. Virtus.pro, the winners of last month’s ESL One Lost Angeles Online: Europe & CIS event, still sit towards the top of the standings. But the runners up, OG, have fallen very far from the top.

Even with Yeik “MidOne” Nai Zheng returning to the lineup, replacing stand-in Irakli “W1sh-” Peranidze, OG couldn’t stabilize in this event. The team is wracked with ping issues and are not able to field their full roster. They’ve generally struggled in the wake of the challenges they face because of the ongoing coronavirus pandemic.

This was no better seen than in their defeat by their own sister team OG.Seed. After easily securing the first game OG.Seed bounced back in the second to push things to a game three. There, despite OG leading for almost all the match, with Syed Sumail “SumaiL” Hassan taking a massive lead on Riki, Seed was able to demolish their coaches and mentors after a final swing of gold towards the end of the final game.

It should be noted that at the time of the loss OG.Seed was also at the bottom of the table, and this lone victory secured them a tie-breaking spot against Nigma, with the loser heading for relegation. That would mean they’d start the next season in the Pushka League Division 2. Nigma had collapsed this tournament, and like OG, have been severely affected by ping issues. Against both Alliance and OG, the team was thoroughly defeated, and questions have already been asked about whether this is the end of this lineup.

Against OG.Seed, however, Nigma was far more proactive and finally showed signs of life. As Seed rotated their Morphling into mid to counter Ember Spirit, Nigma adapted by giving Amer “Miracle-” Al-Barkawi more support, and despite giving up first blood, remained in the game. Laning phase was tough in the best of one, and both sides grabbed control at one point or another, first as Nigma dropped kills in poorly played fights, and then as OG.Seed mistimed a Roshan take. Ultimately, Nigma split Seed’s attention, with Ursa and Weaver pushing separate lanes just below the high ground. This was just too much for Seed to handle, and after a bitterly fought matchup, the developmental squad lost out.

However, despite this one-game war, all three teams at the bottom of this table, OG, OG.Seed and Nigma have been eliminated from play. It’s very jarring to see these teams at the bottom of the bracket. A consolation is that this isn’t a Dota Pro Circuit event, not until next season, at least. As a result, it just wouldn’t be fair to count out Nigma, and especially not OG, who are both masters of the extreme comeback. OG.Seed also faces the daunting prospect of working itself through the lower division of the Pushka League next season.

It's amazing how much people are overreacting to Nigma doing fairly badly in a few tournaments. All teams go through peaks and troughs, they got 2nd place at the last TI

On the flip side, things have been nothing but flowers for Alliance. The team had been a non-factor in the ESL One LA Online event, dropping out of the playoffs in a single series. But here for the first time, the new-look roster, featuring Gustav “s4” Magnusson, was on fire. Along with Team Secret, the stack dominated all comers in the group stage, lead once again by superstar carry Nikolay “Nikobaby” Nikolov. In their absolute domination of Nigma, Nikobaby was a significant part of that team’s incredible performance, along the way accruing a 20,000 gold net-worth advantage by 20 minutes.

This series felt like a shooting star, blink and you'll miss it!🌠

To see Alliance (and for that matter, Team Liquid), who were struggling at the end of the previous event, now towards the top of the bracket, is an incredibly exciting turnaround.

With flip-flopping and huge changes in the European region, you might expect CIS to be doing the same. However, for the most part, it’s all big, familiar names at the top of the table like Virus.pro and Natus Vincere. The one slightly unfamiliar name in the CIS group stage remains HellRaisers and one that definitely won’t be skirting under the radar any more after this event. As previously detailed, this up and coming team has bloomed into one of the most dangerous opponents in the region, defeating all comers on their way to the top of the table.

Not only are the HellRaisers good, but they were also the top of their division by a considerable margin, securing the first spot in the playoffs three days before the end of groups. Against Team Spirit, in their final match of the group stages, HellRaisers executed perfectly on a dominant composition. Using the vast utility of Disruptor/Shadow Demon/Timbersaw, the squad barely let TSpirit breathe in their matchup. Although it was a long, drawn-out game, there was little sign that the HellRaisers would be anything other than the winning side.

HellRaisers isn’t an undefeatable monster, though. They’re a squad that’s started to drop games, and not to top opponents. Faced with the best that Europe has to offer, they might begin to falter. But if they’re intimidated, the team certainly isn’t showing it.

Tomorrow we'll start competing in the WePlay! Pushka League Season 1 playoffs, with our first game being against @NiPGaming. See you all in the chat!🔥

The other notable face in the CIS playoff are VP.Prodigy. The youth team of Virtus.pro locked down their spot in the playoffs quicker than the main roster, even out-performing them on several occasions. For a squad that unfortunately launched on April 1st, they’ve performed incredibly. The youth squad took down HellRaisers after a 60-minute slog, doing something the main Virtus.Pro squad couldn’t. Although when head-to-head, it was clear that the main team were the top dogs (or bears). Headed by Egor “epileptick1d” Grigorenko, a 17-year old who already has DPC LAN experience, these genuine prodigies are a team to watch in the next few days of games.

Heading to the playoffs

The playoffs of any tournament are a different animal to the group stage. With elimination a far more pressing issue, many teams transform from losers to heroes in a few short games. What’s more, this is going to be a real test for some of these squads. There’s not a single team in the playoffs that’s been flawless, and those who’ve been shaky in the group stages, such as Natus Vincere and Team Liquid, may find themselves pushed to the limit in this bracket.

The WePlay! Pushka League playoffs begin on Saturday, May 8th, concluding on Tuesday 12th with the Grand Final. You can tune in every day on WePlay! ‘s series of Twitch channels. For more information, visit the official website.