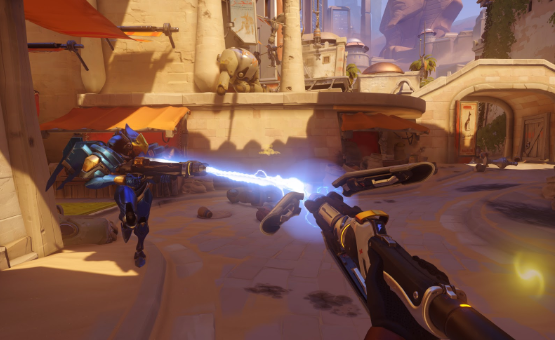 Pharah/Mercy is a strong duo to try next time you queue up with a friend. (Photo courtesy Blizzard)

Overwatch is a team-focused hero shooter; however most players aren’t going to play the game with a full six person stack. In fact, at higher levels of the competitive ladder, players are only allowed to queue in groups of two at the most.

Luckily, two players is enough to make a big impact for your team if you select the right hero combinations. For those who are queuing with a buddy, here are some highly effective hero combinations to tryout with your partner in crime.

Zarya and Reinhardt have been OTP since the release of Overwatch. Reinhardt is a powerhouse with his massive barrier and Rocket Hammer, while Zarya provides a lot of utility and damage for the team. When played together, Reinhardt and Zarya’s play styles synergize really well. While Reinhardt holds the frontline with his shield, Zarya is able to do damage through the shield and bubble Rein whenever he drops the shield to use his firestrike ability, deal damage with his hammer, or even charge deep into the other team.

Zarya’s abilities compliment Reinhardt in important ways. When Reinhardt charges in, Zarya’s Particle Barrier is able to keep him safe while also charging up Zarya’s powerful beam weapon. At the same time, Reinhardt’s Protective Barrier can keep Zarya safe while she waits for her bubble-shaped particle barrier to recharge. Due to their complimentary playstyles, playing both these tanks allow you and your buddy to aggressively push positions without immediately being overwhelmed by the enemy firepower.

People are sleeping on Pharah + Mercy. There was a time when Pharah was a go-to option to punish enemy teams who didn’t run a hitscan character. A skillful Pharah and a clever Mercy player can essentially stay alive indefinitely while dealing massive damage to the enemy. One of the fastest ways to get an enemy team to rage quit is to effectively utilize Pharah’s extraordinary mobility to constantly pepper and harass the enemy backline. We’ve all been on a team that struggles to deal with a good Pharah, it’s infuriating.

As an added bonus, if your team also happens to be running a Winston or a Moira it becomes a lot easier to confirm kills on targets that Pharah rockets have weakened. Without a character who can finish your kills, it can get frustrating to be Pharah since they nerfed the area-of-effect damage on her rockets a couple years ago, making it more difficult to get those kills.

This hero combination made its debut as a strong answer to the Orisa + Roadhog meta which dominated the early role queue era of Overwatch. It turns out, the answer to people trying to bunker behind a barrier is to boop them away from the barrier. Hammond and D.Va are a dive tank core that are highly mobile, incredibly disruptive, and deal high damage for tanks. This combination is most effective when Hammond and D.Va coordinate together to take out specific targets.

The ideal series of events should be Hammond swings into the enemy team, throwing them out of position and away from their barriers. Hammond should then pile drive down on the support line in the back, followed by popping his shield and pulling out his weapons to focus fire on a selected target. At this point, D.Va should be flying in, micro-missiling the target, and using the damage matrix to cover Hammond. Once the enemy team turns to defend their supports, both tanks use their low cool down movement abilities to escape. Ideally, you are able to kill one or both supports while distracting the entire enemy team. This dive strategy can be repeated, battering the enemy team’s backline into submission.

The reason that Hammond and D.Va combine so well is that they are both highly mobile and difficult to focus fire. Hammond’s play style is so disruptive, since he can move fluidly in and out of the fight. When he is supported with D.Va’s consistent and targeted damage, the combination becomes very difficult to deal with, especially if the enemy team isn’t well organized in the first place.

Ana + Reinhardt will always have a special place in my heart. There is nothing more satisfying than sleeping a Lucio and calling over your Reinhardt to charge him into oblivion. Ana has the potential to put out the most healing of any support hero in the game, especially when she is healing a massive target like Reinhardt. On top of that, a skilled Ana can shut down half the ultimates in the game using her sleep dart. Due to the close range nature of Reinhardt’s fights, Ana’s heal grenade often heals Rein and blocks healing the people he is fighting. When Ana throws her ultimate on Reinhardt, he does 112 damage per swing in addition to taking 50% less damage from enemy hits.

Reinhardt also benefits Ana. There is no more distracting tank than a swinging hammer Reinhardt. It’s pretty difficult to focus on the enemy backline when a Reinhardt is smashing your frontline to death. Ana can heal Rein from a decent distance away, which is good because it means Reinhardt doesn’t have to babysit the healer and can instead focus on crushing the enemy.

Speaking of bunker composition, Orisa and Roadhog are a classic tank duo that is very hard to kill. Orisa and Roadhog compliment each other in several important ways. Orisa’s shield is probably the best barrier in the game. When combined with Roadhog’s self-healing and high burst damage weapons, this tank combination becomes very difficult to unseat from a position once they are bunkered down.

Roadhog is excellent at defending supports. His hook is a constant threat to anyone trying to attack the backline. Orisa’s Halt and Hog’s Hook abilities are broken on their own, so the halt + hook combination is probably the most broken combination of two character abilities in Overwatch. To pull off this combo, Orisa needs to halt an enemy player followed by Roadhog hooking them while they are frozen by the halt. With a little practice and communication, you and your buddy can master this combination and absolutely devastate the enemy with it.

The only downside to this tank composition is that it is not very aggressive. It’s called a bunker composition for a reason, as it works best on defense or on maps with a neutral point to take and defend.

Mei has been broken for a while now. Mei combined with almost any other DPS hero is the Overwatch League meta at the moment. Ever since they heavily buffed her kit in a gambit to nerf GOATs, Mei has been able to freeze multiple targets at once. When you combine that ability with a high damage dealer like McCree, Hanzo, or Reaper really bad things start happening to the enemy. Mei is particularly effective at holding an area with a lot of cover, since the second your tank walks into her space, she can trap him with her wall and then freeze him to death while your buddy shoots him as McCree, Hanzo, or Reaper.

On top of her already incredibly powerful kit, Mei also has arguably the best ultimate in the game. Her ultimate zones off most points in the game in their entirety, and freezes enemies for  5 seconds. Unless you have a D.Va to eat it, there isn’t much you can do to stop Mei from wiping your team with her ultimate. If you and your buddy want to have a great time on the ladder, one of you play Mei and the other one of you play a high damage dealing character like Hanzo, Reaper, or McCree. It honestly barely matters which, all those people’s ultimate abilities combine well with Mei’s ultimate and her normal abilities.

These were just a few of the most notable combinations. There are numerous other great Hero combinations to try in Overwatch, so keep experimenting!