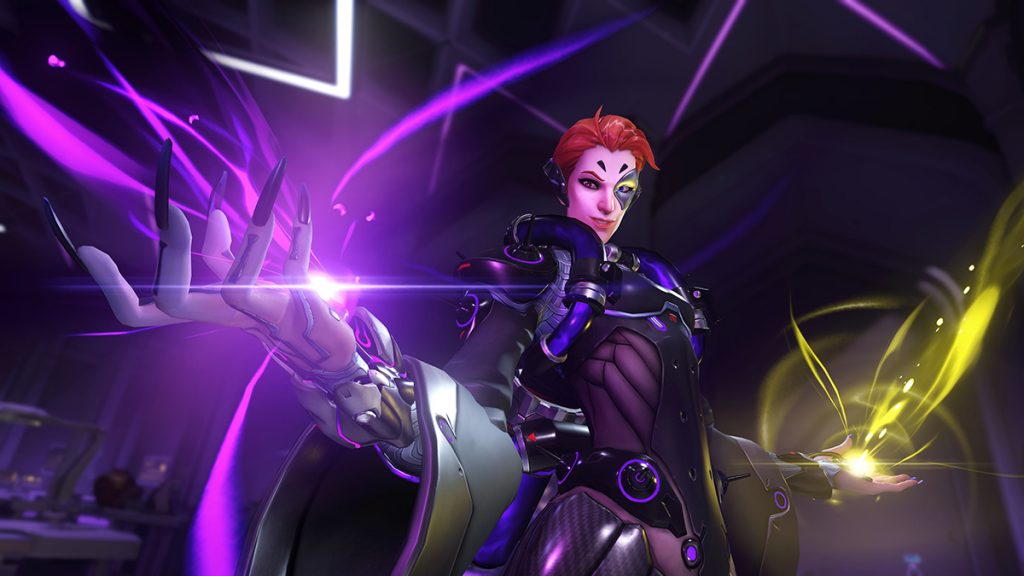 With 31 Heroes to chose from, Overwatch can feel overwhelming to a newcomer. But we are here to help make your introduction to the game easier (Image via Blizzard Entertainment)

Whether you’re a new player inspired by Overwatch 2’s announcement at BlizzCon, want to learn more before the Overwatch League comes to your hometown, or just want to try something new, there are still great reasons to start playing Overwatch even over three years after the game’s launch.

However, one of the immediate questions that a new player will face is who out of the 31 different heroes they should play. In this hero-based first-person shooter, players can decide to compete as tanks, supports, or damage characters. Each hero has advantages and disadvantages, their own set of unique abilities, and can synergize with allies or counter enemies.

While some heroes have lower skill floors, this does not mean that they do not require skill or are necessarily easy to play. As you improve and rise up in rank, your mechanical skill and game sense will have to evolve and adapt alongside your opponents’. But who are the best heroes to start off with? In Hotspawn’s guide for new Overwatch players, we’ll provide you with a couple of heroes that will let you master the basics quickly and help make your first matches as successful as possible. 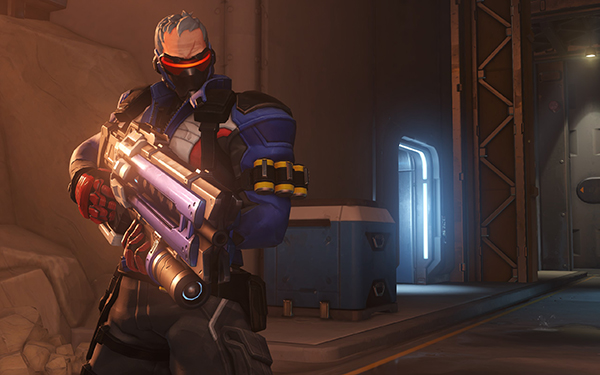 Soldier 76’s straightforward abilities, makes him one of the perfect DPS Heroes in Overwatch (Image via Blizzard Entertainment)

While Soldier: 76 has unfortunately disappeared from the highest level of play, there is almost no better hero to learn Overwatch on than this grizzled old soldier. Soldier: 76 gives players a familiar and straightforward kit that is easy to learn, with his Heavy Pulse Rifle providing consistent mid-range damage. A hitscan hero, meaning that bullets hit immediately without travel time, Soldier: 76 is effective at countering aerial heroes such as Pharah or Mercy, but he can also target a wide range of lower-health enemies with great impact.

Soldier: 76’s abilities include sprinting, a Biotic Field which heals himself and any allies within its radius, and projectile Helix Rockets. Helix Rockets, similarly to Pharah’s primary fire, can deal heavy direct damage or reduced splash damage upon hits. This can be extremely useful in finishing duels against heroes with smaller health pools, or when breaking the enemy team’s shields. Soldier: 76’s Tactical Visor ultimate locks aim on to enemies and can quickly eliminate multiple threats, especially when combined with teammates ultimates or using flanking routes.

To best utilize Soldier: 76, use sprint to take high ground and gain the positional advantage to deal devastating damage with Helix Rockets and your Heavy Pulse Rifle. Soldier is able to play more independently than other Damage heroes due to his Biotic Field and can escape many situations with sprint. Soldier: 76 will allow you to quickly learn map positioning and hitscan mechanics while not having to completely rely on teammates for healing. 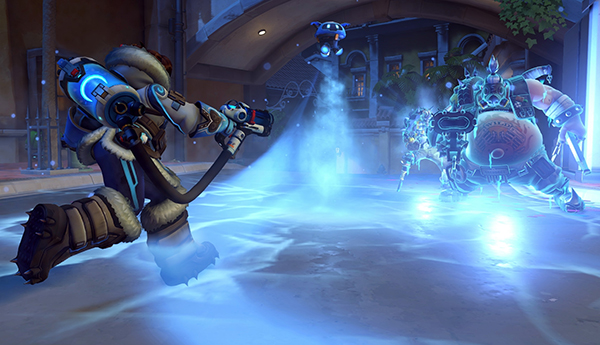 Although Mei has a more advanced kit than Soldier: 76, her utility has made her a vital pick in the current 2-2-2 meta and is worth learning early. Her Endothermic Blaster’s primary fire expends a short-range stream of frost that can gradually slow and ultimately freeze multiple enemies at once. Mei also has a long-range secondary fire and can shoot projectile icicles with no damage falloff. She can eliminate most heroes on her own by freezing the enemy with her primary fire and then finishing them with an icepick to the head. Although tanks are usually not eliminated by this combination on its own, freezing an easy target such as a D.Va or Reinhardt can dismantle the enemy front line.

Apart from her Endothermic Blaster, Mei also has the ability to Cryo-Freeze and create Ice Walls. Mei’s Cryo-Freeze ability allows players to become immune to all damage in a cocoon of ice. She also is healed and can remove effects such as Zenyatta’s Discord Orb, Ashe’s Dynamite, or anti-healing from Ana’s Biotic Grenade. It can also be used to bait out or avoid powerful enemy abilities, like Roadhog’s Chain Hook. Mei’s Blizzard ultimate allows her to freeze and damage any enemies within a large radius and can be combined with other ultimates, especially Reaper’s Death Blossom.

While this hero is powerful, there are some pitfalls to avoid. Mei players must be aware of the cooldowns of D.Va’s Defense Matrix or Sigma’s Kinetic Grasp, which can absorb the Blizzard projectile, negating the ultimate. However, one of the most difficult abilities for new Mei players to master is the Ice Wall. While Ice Walls can be a death sentence for enemies blocked off from their supports, teammates can be separated by the Wall just as easily. In your beginning matches, try to use walls to mainly block off enemy ultimates or snipers’ sightlines. 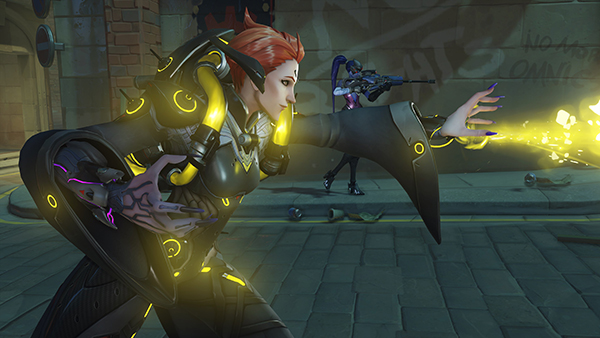 Moira is one of the most versatile heroes in the entire roster and is often accused of being overpowered at many levels. Her Biotic Grasp’s primary fire sprays healing energy that has a heal over time effect and can reach several teammates at once. After a certain point Moira’s healing ability, measured by a meter, will run out, only to be recharged over time or by dealing damage. The secondary fire of Biotic Grasp deals lock-on damage to enemies at a deceptively long range, but also recharges Moira’s ability to heal, and passively regenerates her own health pool. This can be extremely effective against small, mobile, or hard to reach heroes, such as Genji, Tracer, or Pharah.

This Talon healer is able to choose between healing multiple allies or damaging enemies with her Biotic Orb, which bounces off walls and ceilings and can pass through shields. This can be extremely impactful in tighter map areas, including most Control points. Although finalizing an elimination with the Orb can be tempting, the best use of the Biotic Orb is usually healing your team or yourself.

Moira’s ultimate, Coalescence, also does both damage and healing. This ultimate is one of the fastest-charging in the game, so don’t be afraid to use it soon after it is ready. With a Fade ability useful for retreating from fights or surviving lethal ultimates, Moira’s survivability and independence as support is high. She is a hero that can both deal the most damage and provide the most healing on the team and can fit into most compositions at lower levels. She is potentially the most flexible hero in the game and a must-learn for new players. 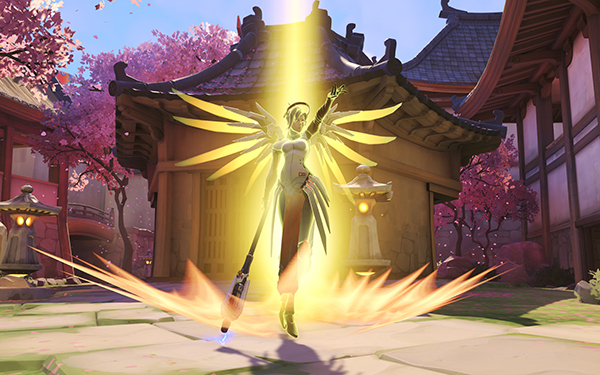 Mercy has seen her place as a cornerstone healer rise and fall over the past seasons of Overwatch League, but she remains an accessible and intuitive support to learn. Although she is armed with her Caduceus Staff and Blaster, newer players will find success by refraining from using the Blaster unless in desperate situations. Mercy’s Caduceus Staff allows players to alternate between healing and damage boosting their allies. Although the healing stream is Mercy’s primary fire, damage boosting allies as a default and then switching to healing when necessary will enable teammates to finish fights more efficiently.

Because Mercy has one of the highest capacities for healing and can resurrect a teammate on a thirty-second cooldown, she is often the enemy’s primary target. Unlike Moira who is far more self-sufficient, Mercy has to rely on her teammates to escape from difficult situations. Mercy’s Guardian Angel ability lets her quickly fly to another teammate’s aid or protection. With a two-second cooldown, Guardian Angel helps Mercy avoid enemy hitscan heroes by flying quickly between allies.

The ability to resurrect teammates has defined Mercy as a hero since Overwatch’s launch and has even been the centerpiece of metas. Although this ability has since been restructured and nerfed, using Resurrect properly can still turn the tide of a match. Be mindful of your surroundings when attempting a resurrection, using tanks and the map’s geography to protect Mercy in her most vulnerable state. Also, certain heroes are more advantageous than others to revive. In most cases, a Tank will be a higher-value resurrect than most Damage and even Support heroes. 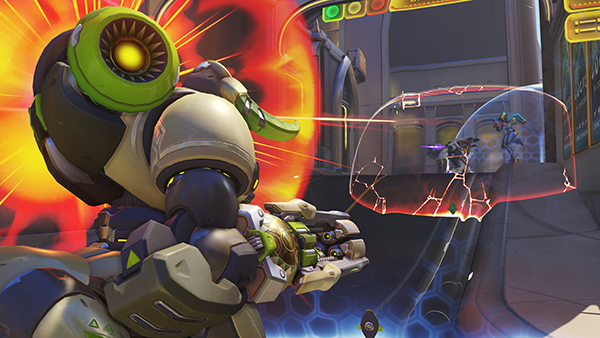 This main tank has been a staple in competitive play for a few metas now, largely due to her ability to contribute to shield pressure and coordination with a variety of other heroes. With the shield meta currently dominating gameplay, Orisa’s Protective Barrier is projected with full health on a cooldown, which can be simpler to manage than Sigma and Reinhardt’s recharging shields. This barrier can also be thrown out far away from Orisa and doesn’t disappear after her elimination, allowing for more versatility.

Orisa also has a high-speed projectile cannon, the Fusion Driver. This weapon is extremely effective at shield-breaking and dealing consistent damage to enemies without any damage fallout. While Orisa loses speed while shooting, and the Fusion Driver has an extremely slow reload, she is one of the few tanks who can hit headshot damage. Her ultimate, Supercharger, provides a 50% damage boost to herself and all teammates in line of sight. The Supercharger itself can be destroyed, so placement behind shields or coverage from the map is key to its success.

Mastering Orisa’s Halt! ability can help unlock her versatility to a variety of compositions, truly making this hero important for new players to learn. A mini-version of Zarya’s Graviton Surge that recharges every eight seconds, Halt! can be combined with Roadhog’s Chain Hook for a near-guarantee kill, Tracer’s Pulse Bomb, Death Blossom, and most other ultimates. Calling out your halts can lead to extremely successful multi-kills. 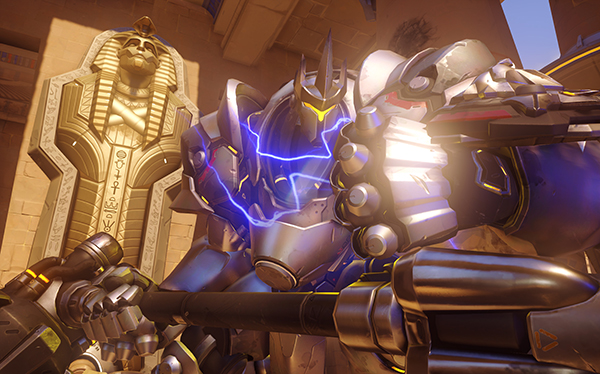 Reinhardt is one of the more straightforward tanks in Overwatch, with a low skill floor yet a high skill ceiling, this hero is an excellent place for players to start. With Fire Strike being Reinhardt’s only long-range damage and his Barrier Field attached to his arm, Reinhardt is a true team anchor, leading from the front line. Reinhardt’s shield, unlike Orisa’s, must be recharged over time to regain health. To maximize this hero’s impact, do not let your shield break – as simple as this sounds, the cooldown required to redeploy it is punished far more often than pausing from a push to recharge.

Another common error is often found when players overuse the Charge ability, looking to pin an enemy for an easy kill. If Reinhardt misses his charge, loses control of direction, or is stunned halfway through, this typically leads to the Main Tank or his backline’s elimination. Using Charge to rejoin fights from afar, or to guarantee short-range kills is often the better choice.

Reinhardt’s Earthshatter ultimate stuns the enemies in front of him unless an enemy barrier gets in the way. One of the most important matchups a Reinhardt player should focus on is the mirror Rein vs. Rein battle. Learning to track the enemy Reinhardt’s ultimate by either keeping track of hit Fire Strikes or even observing the enemy hero’s body language can help you block this fight-winning ultimate. Learning this skill and slowly starting to monitor other ultimates will build game sense key for higher levels of Overwatch.

This guide highlighted six of the best heroes for newer players to learn, each with their own advantages and depth. But ultimately, the best way to learn which heroes work with your style is to practice, try new things, and be patient with yourself. Whether you’re discovering exciting ultimate combinations, or focusing on your mechanical skill, each hero can bring another layer of understanding of Overwatch. Practicing with many heroes also can help you learn counters, tactics, and refresh your enjoyment of the game. We hope to see you on the ladder, good luck and have fun!

Overwatch
Share
Katrina is an interviewer and analyst based in Los Angeles. When she's not at the Blizzard Arena, you can find her either working with data or asking her teammates for healing.
Follow me