How to Play Viper 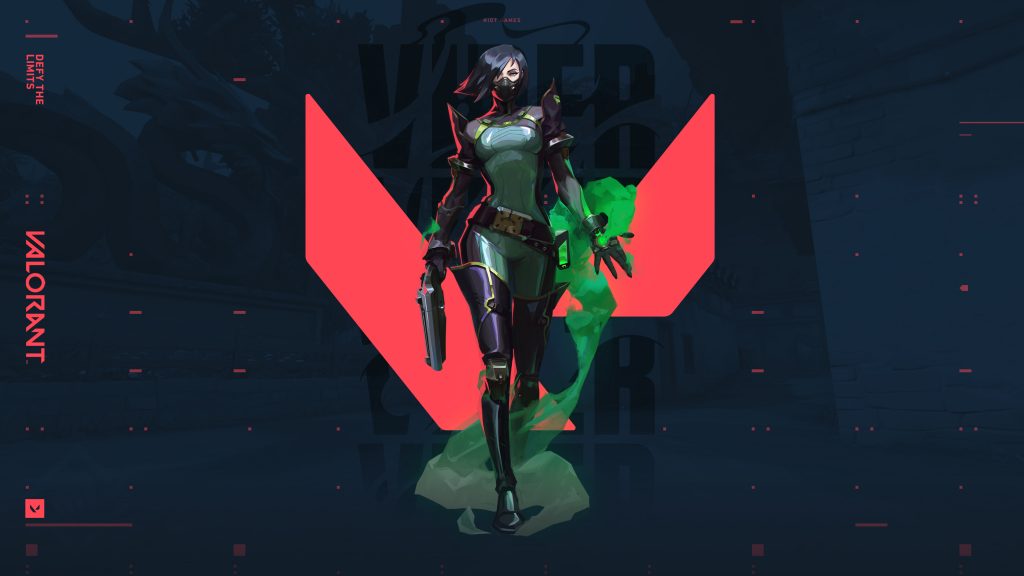 Viper is a difficult agent to master, but her kit has limitless possibilities. (Photo courtesy Riot Games)

Viper is likely the most polarizing agent in VALORANT. Many would call her the worst agent in the game, but in the right hands, she’s a force to be reckoned with. Viper specializes in controlling space and locking down choke points, but it can be hard to get the most out of her abilities, especially if you’re new to VALORANT.

Viper is unique among VALORANT agents due to her fuel meter, which powers two of her three main abilities. When either Poison Cloud or Toxic Screen are activated, the meter starts to deplete. When both abilities are off or the meter runs out, it will replenish until one is reactivated. Both abilities, as well as Viper’s Ultimate, deal decay damage to opponents and allies that recovers when the target leaves the ability.

Viper can be tough to learn, but those that put in the effort will be rewarded with a dynamic, entertaining experience. If you’re interested in controlling the battlefield or exploring an agent with tremendous depth, Viper just might be for you.

Throw Up the Green Screen

Viper’s signature ability is Toxic Screen, a long poison wall that has some interesting quirks. Like Phoenix’s Blaze, Viper’s wall can be used to obscure vision, deter a push, or block off certain angles. That alone can be useful, but learning how to deploy Toxic Screen well can help you take over a site instantly.

The ability is created by firing a projectile that leaves behind a line of smoke emitters that form the wall. It’s unique among walls in VALORANT because it can be fired over walls and buildings – though it won’t create a wall under a roof. That means it can be deployed from safety and activated whenever it needs to go up. For example, this lineup on Split blocks off both Ramp and Heaven, allowing for a quick hit on the A site.

Or there’s this one on Bind that lets Viper defend the A site while still assisting teammates on B by blocking both Attacker entrances to the site.

Toxic Screen is a great tool for cutting a site in two to allow for a safer plant or retake. It can limit the number of angles your team needs to worry about or deny information to the enemy. Keep in mind, you can only place Toxic Screen once per round, so be sure to line it up on the minimap for best results.

Snake Bite is the simplest of Viper’s abilities and by far the easiest to use. It behaves like either Brimstone’s Incendiary or Phoenix’s Hot Hands, damaging players over time. Snake Bite is unique due to its slight slow effect for anyone moving through it.

Viper can use the ability to slow down an enemy push, particularly when she runs out of fuel for her other abilities. If enemies are unwilling to push through the affected area, Snake Bite can buy Viper enough time to recharge her toxin and keep opponents at bay. 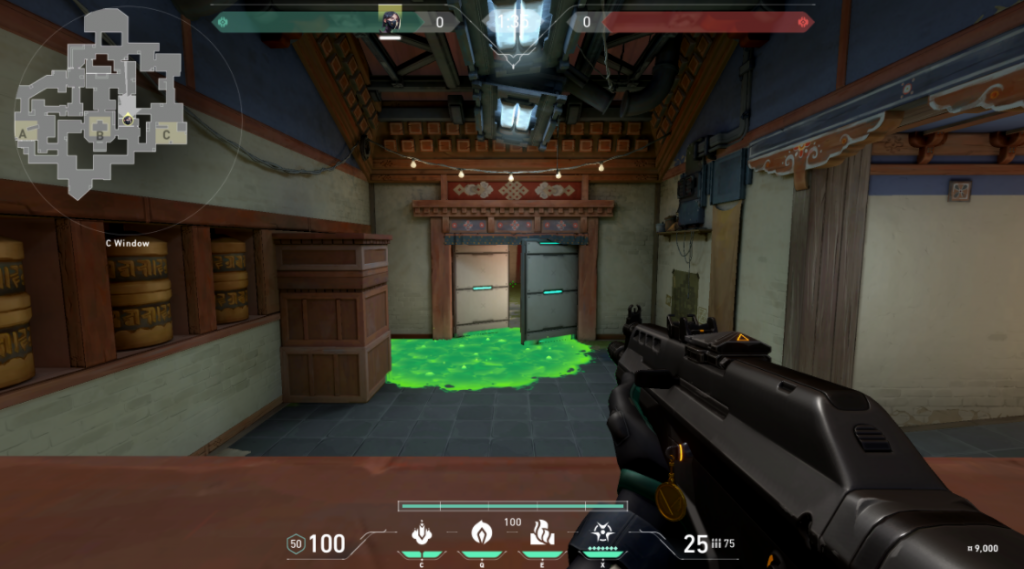 Like other molotovs, it can also be used to flush enemies out of hidden positions since it does permanent damage (unlike Viper’s other abilities). If you have a read on where an opponent is waiting, Snake Bite can force a fight on your terms. While Snakebite is rarely going to win you a round, it’s cheap and serves as a good deterrent against all-out aggression.

Poison Cloud is the ability that separates the best Viper players from everyone else. As a smoke, it works similarly to others in VALORANT, obscuring vision and controlling choke points. Because it can be redeployed and used multiple times as Viper’s fuel replenishes, it can be an incredible stalling tool, especially when combined with her other abilities.

Much like Toxic Screen, getting value out of Poison Cloud will require a little practice. Creative placement of the smoke can do even more than just block vision or delay a push. It can create a situation where you see your enemies before they see you, as seen here on Split.

The ability behaves like a grenade that sticks to the first horizontal surface it touches, which can make for sneaky spots like this one at A Short on Haven.

Learning where to throw your smokes on both Attack and Defense is going to be crucial for anyone trying to master Viper. Even learning just a few placements per map is going to make you infinitely more effective than someone trying to wing it with such a difficult agent.

Even if you don’t know every spot, Poison Cloud is the only reusable smoke in the entire game. That alone makes it a powerful tool in Viper’s arsenal, but researching a few spots and practicing them will go a long way.

In The Viper’s Pit

Viper’s Ultimate Ability, Viper’s Pit, creates a giant cloud of poison gas that covers a large area, about the size of a bomb site. It limits vision for anyone inside it and deals decay damage to everyone except the Viper who used it. The cloud will dissipate when Viper dies or leaves it for five seconds. While inside, Viper’s enemies glow bright red on her screen. 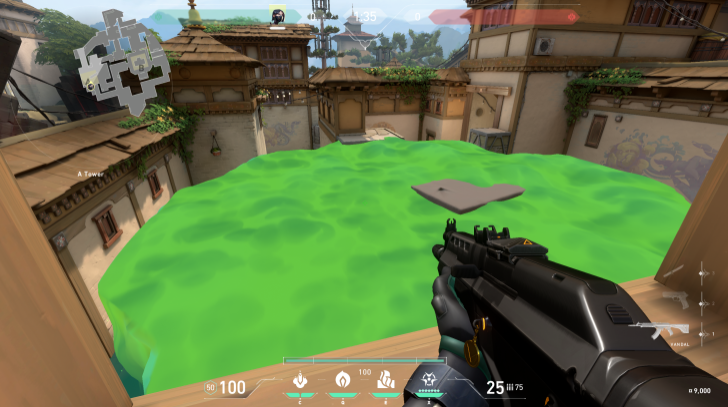 Using Viper’s Pit can be somewhat tricky, as it requires you to have a specific area you need to lock down. On defense, you can use it on a site and let your teammates stack elsewhere, but you become extremely vulnerable to being rushed down inside the cloud.

On Attack, the Ult becomes very powerful for holding the site in a post-plant situation. If you have intel on where the retake is coming from, Viper’s Pit can singlehandedly secure a round.

The best use of the ability is probably when you kill the spike carrier on defense. Dropping Viper’s Pit on top of the spike makes retrieving it nearly impossible for the Attackers. If Viper players want to get creative, they can also take control of Mid on Split or Haven to funnel attackers through easier to control chokes.

However you use the Ultimate, a few things always hold true. You’re going to be fighting at close range while inside, so shotguns and SMGs are some of your best tools. Enemies will be weakened by the poison, so headshots might not be necessary.

Playing around the edges of the cloud can make you very difficult to track down. Enemies won’t usually expect you to pop out, so you can catch them off guard if you know their location. To get really sneaky, you can leave a corner outside of the Pit to hide in. As long as you don’t let the Ultimate disappear, opponents will waste time looking for you thinking you’re still inside.

Viper’s Pit puts a lot of responsibility on the player. There is incredible potential to outplay your opponents, but it’s also possible for them to get the jump on you. They can see just as far as you in the cloud, so always have your head on a swivel. Making the most of the ultimate will frustrate your enemies and elevate your Viper play to new level.

Viper isn’t the strongest agent in VALORANT, not by a long shot. Even the developers have acknowledged that she needs some help right now.

Nerfs to our sentinels' stalling power, Omen buffs (!) weapon tuning (including walk-shooting) and some Split barrier changes. Viper is something we're still working on – but we agree she needs some love. https://t.co/Bo6gCEATtp

Still, Viper’s kit is one with serious upside for anyone who can master it. She can control space and delay a push as well as any agent in the game, and she’s sneaky-good at denying information and vision. With a little bit of practice, a strong Viper player can be an apex predator in VALORANT.

Share
Bradley is a freelance writer who started his esports journey with Overwatch’s launch in 2016. Since then, he’s thrown himself headfirst into the competitive scene at all levels. When he’s not writing about the Overwatch League, he’s probably casting Tier 3 tournaments or playing with his cats.
Follow me