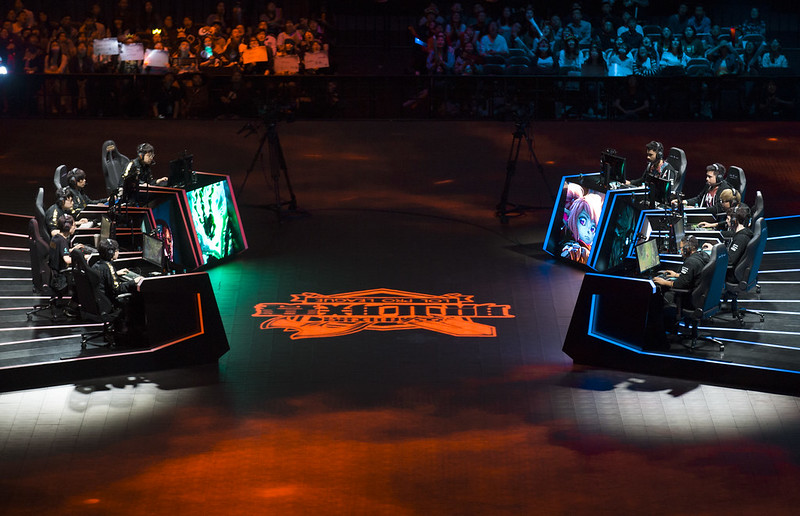 CLG pulled off one of the greatest comebacks of all-time against RNG at MSI 2016. (Photo courtesy Riot Games)

Judging the scope of a lead in League of Legends can be subjective. The winner is determined only by the first team to destroy the Nexus and counting statistics like gold lead and champion kills can end up being misleading. Still, an overwhelming majority of matches are won by teams who get ahead in gold early and use it to snowball their lead.

There are leads, and then there are foregone conclusions. Leads that have the casters announcing the next push will be the final of the game. Leads so big that they are closed out 99 times out of 100.

But even then, every once in a while, you get to see a team pull off an incredible comeback. We take a look at the three biggest comebacks in professional League of Legends history.

This had the makings of a total stomp for TSM. They picked up first blood on an invade in the first minute of play. ESC Ever attempted to dive Kevin “Hauntzer” Yarnell’s Fiora at 6:30 and instead lost three members for zero. A TSM dive top at 10 minutes netted ESC Ever their first kill, but it came at the cost of three more members. That ballooned TSM’s lead to over 3k in 10 minutes.

ESC Ever picked up a few kills in the mid game, but they always came at the cost of TSM securing another objective. When ESC Ever attempted to team fight without the safety of a turret at 29 minutes, Peter “Doublelift” Peng ripped them apart to pick up a pentakill to grow the TSM gold lead to 7k.

After picking off Kim “Ares” Min-kwon at 35 minutes, TSM started Baron. Bora “YellOwStaR” Kim attempted to zone ESC Ever away, but they killed him faster than TSM could finish Baron. ESC Ever won the ensuing team fight five kills to zero and would seemingly take Baron, reset, and look to stall the game out.

But that wasn’t what ESC Ever had in mind. Instead of going for Baron, they immediately grouped to push mid lane. They hadn’t taken a single mid turret yet, but that didn’t matter. ESC Ever expertly juggled turret aggro to maximize their damage and keep their minions alive. The extraordinarily long death timers on this patch allowed for ESC Ever to push down five turrets, an inhibitor, and the Nexus before TSM respawned.

It was a stunning defeat for TSM. In a game they never trailed, one doomed team fight sent them to the Loser’s Bracket at the IEM Season X World Championship. When the Nexus fell at 37 minutes, TSM still held a 71.2k to 65.5k gold lead. Fortunately for TSM, they took down ESC Ever 2-0 in the rematch to advance to the semifinals.

Royal Never Give Up were a juggernaut to begin League of Legends’ MSI 2016. Playing in front of a raucous home crowd, RNG ripped off seven straight wins to start group play. That included a win over Counter Logic Gaming. CLG were hit-or-miss, splitting games against SK Telecom T1 and SuperMassive Esports. So RNG entered their rematch as heavy favorites.

The beginning of the game went as expected. Choi “huhi” Jae-hyun fell victim to Liu “Mlxg” Shi-Yu’s aggression only two minutes in to give RNG First Blood. RNG pushed the pace of the game, forcing skirmishes and dives that CLG wasn’t prepared to handle. CLG picked up some counter kills in the process, but were falling behind in kills, CS, and gold due to always being on the backfoot.

You only need to look to 13 minutes in to see how chaotic the game was. The camera couldn’t keep pace with the action happening simultaneously top and bot. Outplays and kills were continuously exchanged, right into the wheelhouse for the LPL team.

After a team fight win featuring an insane Ekko stun from Jang “Looper” Hyeong-seok, RNG gained total control of the map and took an uncontested Baron at 22 minutes. A five for zero ace at 31 minutes led to another Baron for RNG and a ridiculous 13k gold lead. As the caster Sam “Kobe” Hartman-Kenzler said: “This is gonna be the Baron, and they should be able to march that one in.” CLG repelled a final push at 36 minutes, but they were still down two inhibitors and 15k gold.

Looper tried to teleport flank CLG at 41 minutes but Trevor “Stixxay” Hayes popped off, picking up a triple kill as CLG picked up a five for zero ace to win the game. As they finished off the Nexus turrets, Kobe shouted the iconic: “I never doubted them!”

Moscow Five were the dominant team at this point in League of Legends history and were coming off consecutive IEM tournament wins. They came up with an innovative, aggressive pushing way to play the game that no other team could combat. Only the other end of the extreme, CLG EU’s famously slow pace, gave them trouble.

CLG EU picked up the first two kills of this game, but Moscow Five bounced back quickly. Their aggressive turret diving netted them early kills on Alexey “Alex Ich” Ichetovkin’s Karthus and M5 parlayed that into an early Baron take at 26 minutes. M5 took three turrets with the buff and snowballed their gold lead to 10k at 28 minutes.

Another Baron for M5 resulted in more gold. M5 had the run of the entire map, picking up all the CS, jungle camps, and dragons. The one problem: CLG EU had infinite wave clear with Henrik “Froggen” Hansen’s Anivia. Back in this state of the game, Baron did not buff minion health, so teams could still clear waves without issue. Add in Mitch “Krepo” Voorspoels’ Soraka heals and CLG EU were built to repel grouped pushes.

The gold lead continued to build for M5. It had grown to 26.5k by 54 minutes. Evgeny “Darien” Mazaev’s Vladimir had a 150 CS lead over Mike “Wickd” Petersen’s Irelia as farm was funneled into Froggen and Peter “yellowpete” Wüppen’s Tristana. Still, M5 could not crack CLG EU’s defense.

Finally, M5 walked up too far to CLG EU’s bot lane turret and Froggen responded. His Anivia Wall sealed off M5’s escape route and forced them to commit. Stephen “Snoopeh” Ellis and yellowpete fell, but CLG EU picked up four kills for two and finally got room to breathe. They marched bot lane and cracked their first inhibitor at 58 minutes, still down 23k in gold.

The problem with a game stalling out so long is that even if you still have a massive gold lead, it only matters as long as there are still items to buy. Once champions become item-capped, the gold lead no longer matters. CLG EU had the better team fight and finally had caught up in items to contest M5 out on the map. They started Baron, forced M5 to fight them, and picked up a five kills to zero ace to pick up the win.

It was an incredible display of patience from CLG EU to stall the game out in one of the longest games of all time. Any little slip up at any point from minute 30 to 60 would have been an instant win for M5. But CLG EU dug themselves out of the biggest hole in League of Legends history.