Goodbye to NA at the StarLadder ImbaTV Dota 2 Minor 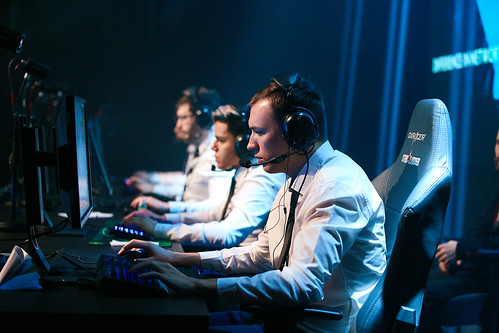 Snappy dressers or not, we said goodbye to NA’s business associates as they found themselves eliminated from the StarLadder Minor. (Photo courtesy DreamHack)

North America’s business associates and CR4ZY, South America’s NoPing e-sports, CIS’s forZe, are all headed home, falling in a series of cutthroat StarLadder elimination matches. It’s a huge shame we have to say goodbye to some of these teams, but ultimately they couldn’t get things done when push came to shove.

Business associates spent the StarLadder Minor so far making questionable decisions and this series against BOOM Esports was no different. In game one of their elimination matchup, BA just didn’t facilitate their own victory. David “Moo” Hull was the clear star of the team for this first game, winning his lane, roaming, and not giving up free kills. However, by the time he was relevant in the match, the team was already being pressed on their high ground.

Despite Moo’s attempts to carry his team, whatever he did was countered by BA’s questionable decisions, including dying under tower while pushing high ground and getting caught in lane because of lack of vision. These were rookie mistakes by a veteran NA team and it was painful to watch.

In the second game things went slightly better. By better supporting Moo, the team were actually able to stay relevant as the game moved past 30 minutes. After BOOM made a series of positional errors the team took Roshan, pushed high ground and grabbed the win, saving themselves from elimination for another game.

However, in game three BOOM’s incredible individual talent started to shine through. Finally, after a disappointing start to the tournament Thursday, we could see how this team as able to defeat the number one DPC point scoring team in TNC Predator during the qualifier. Rafli Fathur “Mikoto” Rahman was incredible in this series, and continued to be throughout the team’s games later today. After a 42-minute match, where the North American team never looked truly capable of mounting an offence, Business Associates became the first team eliminated from the Minor.

Our second StarLadder Minor matchup pitted North and South America against each other in a battle for survival. NoPing e-sports vs. CR4ZY started off with a very bad showing from the NA team.

No Ping dominated in almost every lane, with Jonathan Bryle “Bryle” Santos De Guia unable to do anything in his. After crushing mid, NoPing rotated top capitalising on the weaker lanes. But while CR4ZY were able to get a respectable push bot, they couldn’t obtain any kills until almost 14 minutes into the game, when a slight over extension cost NoPing their lives.

But ultimately, they didn’t punish NoPing and the SA team were victorious after an absolute stomp of a first game. In part this was thanks to No Ping’s surprising discipline, something we rarely see from team from their region. The runaway performance from this match was Matheus “King Jungle” Dinizking on Lich with a ridiculous 9/0/10. His roams, his laning, and everything he did was flawless, earning as many kills as his carries.

But after this initial stomp, CR4ZY stabilized. Although they appeared to have a bad draft, in game they placed much more focus on mid, teleporting whenever when Bryle got ganked. As a result, despite NoPing’s impressive vision control, CR4ZY won almost every lane, which translated to a slow, but deserved win for the former Fighting PandaS lineup.

Ultimately this game broke the back of NoPing. Game three was a complete stomp, as CR4ZY won each lane, methodically pushed towers, and took highground. CR4ZY showed a consistency here that we’ve rarely seen from them. Meanwhile, NoPing depart after several impressive showings against teams heading to the playoffs.

Heading into the deciders at the StarLadder Minor, the CIS squad forZe clashed with BOOM Esports. The latter team had a tremendous amount of momentum heading into this match. Even so, this first game of the series was the most evenly matched game of the tournament so far. ForZe won side lanes, while BOOM won mid. This left Rafli Fathur “Mikoto” Rahman as the only effective player on BOOM.

Despite the team taking good trades versus forZe’s calculated aggression, the lack of early lane victories meant that BOOMcouldn’t push back. Their Ursa couldn’t engage, getting kited the whole time, and as a result, BOOM just couldn’t pick fights, losing the game without much contest.

For the next game, it was a rough start for forZe. BOOM’s Anti-Mage was a very deadly pick, which got fed quickly, and didn’t fall off. ForZe attempted to slow down BOOM in a number of ways. The Medusa delayed BKB for Demon Edge, building towards the Divine Rapier win condition, while the team overall started to take riskier fights.

But ultimately, BOOM had gained too much of an advantage, securing the second win, and sending us to game three. This time forZe flipped the script, and were able to get an early lead. But by not focusing Mikoto sufficiently allowed his Razor pick able to freely farm and scale into a monster. With Razor dominating the fights, after getting a great early lane, and forZe’s three melee cores meant the team died far too easily. As a result, we say Goodbye to forZe, who were impressive this event, but couldn’t make it to the playoffs.

The last match of the day at the StarLadder Minor pitted two veterans of DPC events this year. Alliance were heavy favorites, but the first game of the series started with a stalemate in lane. But after getting a crucial kill top, and forcing out Nikolay “Nikobaby” Nikolov’s Faceless Void’s Chronoshift, CR4ZY were able to take the first tower top, and get a great push. From there CR4ZY capitalized, gaining more kills and gathering a small lead. But eventually, the more experienced Alliance lineup were able to pick a good fight in the bottom lane and eradicate their lead.

With the match now back in it’s stalemate position, CR4ZY were forced to try and make a play. Because of their team comp, Alliance would scale far harder into the super late game, so CR4ZY had to try and take Nashor. This led to a bad fight for Alliances opponent, as Nikobaby dominated the team fight. After this, it was simply a case of closing out the match with their now substantial lead.

Heading into the next match, CR4ZY abandoned the Abaddon carry pick which had done nothing in the previous match, and drafted a much more traditional lineup. Meanwhile, Alliance picked up the hard-carry Medusa for Nikobaby. But in the early game CR4ZY were able to limit the effect of Alliance’s one position, while silly mistakes would mean they were dropping kills to their opponents. Eventually, CR4ZY snuck a cheeky Roshan, and took a definitive lead.

However, disaster struck for CR4ZY. The team went all in on Nikobaby’s Medusa in an effort to shut him down, only for the carry player to live. As a result Alliance took the lead, with their carries now double the net-worth of their opponent’s carries. After a second Roshan take from CR4ZY, Alliance engaged, instantly killing off the Aegis resurrection and stealing the cheese. This was the point where the game became unwinnable for CR4ZY, and leading to their elimination.

Despite some incredible play from a number of underdog teams, the group stages of the StarLadder ImbaTV Dota 2 Minor have ended almost exactly as expected. BOOM Esports are the most surprising team to move forward, but they’ve definitely earned it. Make sure to watch StarLadder’s Twitch channel tomorrow as the Playoffs begin, or keep your eyes peeled to Hotspawn for more coverage.