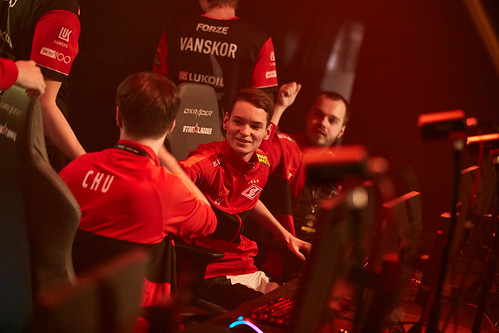 forZe defied all expectations with their stellar performance in day one of the Kyiv Minor. (Photo courtesy StarLadder)

Day one of the StarLadder ImbaTV Dota 2 Minor Season 3 is all wrapped up, and after a great day of games, we’ve already had a few surprises. Top of the list of these unexpected happenings is the surprising competence of CIS team forZe and the underwhelming display from Europe’s Alliance.

Luckily for us though, these surprises started right from the first pair of matches and continued right until the end of the day. From the first opening series to the final game in the Winner’s bracket, there was always something a little shocking for us to wrap our heads around.

Business Associates had created a fair amount of buzz around their tournament attendance. Decked out in shirts and ties, the smartly dressed former J.Storm stack had high hopes heading into the first match against forZe. They immediately attempted to solidify their status in the event by capitalizing on a cheesy Chen, Storm Spirit combo. They quickly took the lead in the game by rotating after a kill bottom to take an early mid tower, and gain momentum. From there the match was in hand, with BA taking out their opponents and heading to game two.

One thing that stood out was the strange itemizations and lack of frontline from forZe. With the second game starting, forZe broke out a few more unusual picks and item choices, but early mistakes plagued their gameplay.

The speed and mobility of Business Associates Monkey King prevented forZe from being able to contest objectives. But despite BA’s excellent drafting and more substantial pro tournament experience, forZe’s pub game-style tactics, such as True Form Lone Druid, and unusual Pango itemization. They caught their opponents off guard and were far better at capitalizing on mistakes. In the mid lane push, BA overextended and found themselves almost wiped. After this, the team slowly hemorrhaged gold and were handed a taste of defeat.

ForZe were consistently better at capitalizing on their opponent’s mistakes in this entire series, and by game three were actively punishing BA for every wrong step. In a brutal 51-minute affair, the team ground down BA for everything they were worth. Even after losing every lane, and the majority of their structures, forZe’s aggression and punishing play grabbed them victory and a trip to the Winner’s bracket.

GG! We win this series 2:1 and now we’ll getting ready for the next match in the upper bracket. 🤝 pic.twitter.com/Tspfw08A6y

Sadly the forZe/BA match would be the most competitive part of group A. In the other matchup, Team Aster absolutely rolled over BOOM Esports, crushing them in two barely contested games. In game one, it was Pan “Fade” Yi’s monstrous performance on Nyx Assassin that proved too much to handle. Aster’s team captain roamed the map securing kill after kill for his opponent and made sure his Timbersaw and Troll Warlord were unkillable.

In the second StarLadder game, Aster’s supports again showed a ridiculous amount of early game aggression. It didn’t look like BOOM Esports had ever encountered anything like it, as they struggled to even lane against the unceasing aggression. Ultimately, after two quick games, Aster was headed to the Winner’s bracket.

Group B – This Team Beat Nigma?

Alliance has a lot to live up to this Minor. With the limited spots on offer for European teams, they clutched out the last possible spot in this Minor. What’s more, they arrive two days early to Kyiv to get in an extra two days of bootcamp. Yet, so far, their performance has been nothing to write home about. In game one against NoPing e-sports, they struggled to maintain an advantage. After giving up first blood, and then a host of free kills in bizarre attempts at team fighting top, NoPing had a clear economic advantage.

Somehow Alliance held on. Perhaps it was the eerily familiar team comp of their opponents. The Enchantress/Warrunner combo was something straight out of Nigma’s playbook, and Alliance seemed ready to stall out the game and wait for their advantage. Eventually, Alliance finally found a decent trade while defending their high ground, and took back control after a great engagement by Neta “33” Shapira. This, combined with the unusual double Rapier pick up by Nikolay “Nikobaby” Nikolov on Medusa ensured that the team secured their victory and moved onto game two.

With a much more solid-looking draft and more confidence, Alliance were able to sweep the second game. But again, the team didn’t look nearly as strong as their previous showings would suggest. For a team that had come fourth in a Major only a month and a half ago, a performance like this against a second-tier South American team isn’t good enough.

Elsewhere, Gambit Esports took on CR4ZY; the former Fighting PandaS roster. It wasn’t a good day for NA Dota, with the Business Associates losing out in group A, and CR4ZY doing no better here. Although seemingly winning the draft, the team was unable to prevent Gambit from doing pretty much anything they wanted.

Rapier on Medusa wasn't the answer. Game one victory! #KyivMinor

In both games, Gambit simply showed better rotations. The more aggressive CR4ZY consistently took unfavorable trades, and although Gambit had a few issues, such as a disproportionate amount of gold going onto Clockwerk in both games. In the end though, this just meant more catches, and more kills for the team overall. They headed to face Alliance in the Winner’s bracket.

The first series for Team Aster was a quick stomp, but forZe weren’t about to go down without a fight. Picking up the Meepo as their primary carry, with Snapfire to keep him safe, there were multiple situations where Meepo escaped certain death to plague Aster for 40 whole minutes.

But despite this tricky play, the CIS team just couldn’t cut down Aster’s early game lead enough. The side lanes had too much of a poor start to the game to be able to support their fed carry, and after a tight match, Aster took the win.

Game two felt like revenge. Aster was not about to let pub game tricks and Meepo play defeat them. They punished forZe, rotating early in the game, and grabbing quick kill after kill. Before long, there was a nearly insurmountable lead. However, forZe still didn’t die easily. Their Mars/Razor/Io combo seemed picked deliberately to annoy their opponents. Despite their loss, forZe has managed to defy a lot of expectations, and it will be exciting to see how they do Friday.

Alliance versus Gambit, on the other hand, was a much more decisive affair. Coming into this tournament, most spectators would have put Alliance ahead of Gambit in terms of raw skill. In the game, this just wasn’t the case. Game one started off bad for Gambit and quickly got worse.

It seemed like something was missing from the Gambit lineup, as nothing they did was working. Every catch, every engagement, the team would come away with no kills or an uneven trade.

But Gambit’s draft wasn’t designed for their early aggression. It was in fact perfect for a later game. At 25 minutes, their carries were fully online, and then swept down Alliance’s lanes taking a decisive victory.

For the second, and ultimately final match of the day, Alliance drafted super well, giving themselves a significant advantage early game. But as the game progressed, their draft never materialized into something meaningful. With Danil “gpk” Skutin in the mid lane for Gambit on Kunkka, any early lead was mostly meaningless. Alliance found themselves with a long slow death ahead of themselves, watching a game that was ultimately over from 10 minutes in extend to a near 30-minute loss.

Alliance would fall, sending them to the lower portion of this bracket with just one more chance to advance to the playoffs. The team which defeated Nigma to get here and one of the best teams in Europe have been repeatedly humbled by a series of awkward games against opponents they should have been better than. Meanwhile, Gambit is living up to their true potential, and it will be great to see them advance in this tournament.

Tomorrow we’ll see the four losing stacks of Business Associates, BOOM, NoPing, and CR4ZY clash in the morning before the deciders match in the afternoon. After this the tournament will have already said goodbye to four teams, and be ready for the playoffs. Tune in on StarLadder’s Twitch channel to watch it live, or keep your eyes peeled to Hotspawn for more coverage.