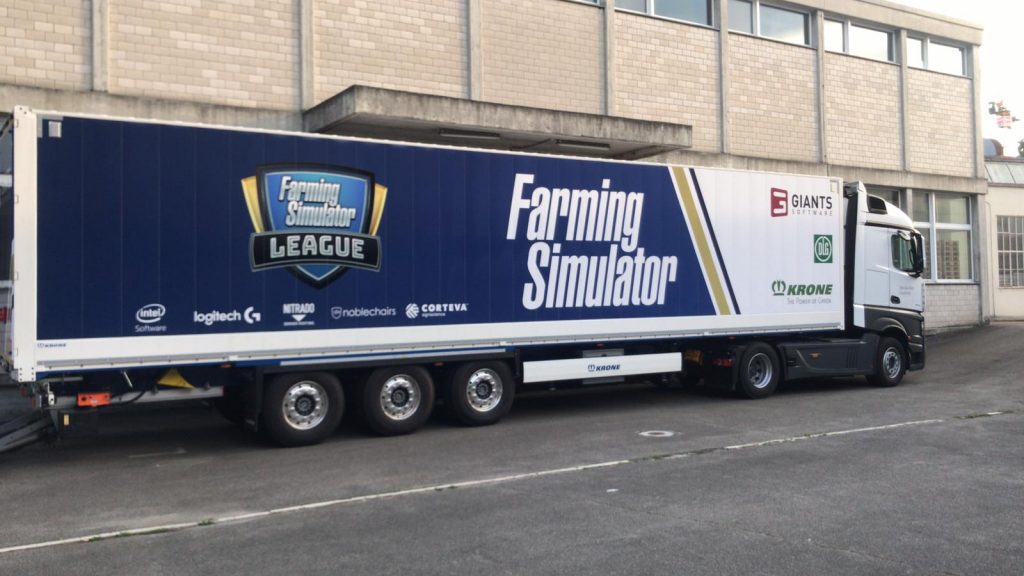 At the start of the year, GIANTS Software announced they were creating a Farming Simulator League in an effort to allow competitive players the ability to reward their hay stacking and farm management skills. Nearly six months later, the FSL announced the official tournament rules for the League. This comprehensive breakdown helped non-Farming Sim players get a better idea of how the League would function and how teams scored points. Seeing as FarmCon 19 is this weekend (July 27 and 28), where the first official FSL tournament will take place, it’s time to dig into the league, the teams and what to expect at this weekend’s first FSL tournament.

We had the opportunity to speak to Lars “Lisertan” Malcharek, the head of esports at GIANTS Software. He helped us get a better understanding of the FarmCon 19 tournament and gave us an insight into the future of the FSL.

FarmCon 19 will see twenty-six teams compete in a mixed bracket of both seeded teams and wild card (WC) teams – thirteen seeded teams and thirteen WC teams. As we outlined in our FSL breakdown article, the WC normally face off in a WC Qualifier stage, or Stage One, to see who will move to Stage Two of the tournament. Because of FarmCon’s shorter tournament length, WC teams will be chosen and the tournament will commence in Stage 2 or the “play-ins.”

This weekend, 13 Seeded steams will compete against 13 Wild Card teams to make it to the finals (we will stream the Finals only.) Wait.. 13 Seeded Teams? Yes, that means we have to announce some more right?

Please welcome CLAAS to the #FSLhttps://t.co/FS93pJ4LRf

Besides the Wild Card teams, we’ll get to see 13 of the seeded teams at FarmCon featuring some of the biggest names in the agriculture industry. The 13 seeded teams participating this weekend will be:  Amazone, John Deere, mYinsanity, Horsh, Grimme, Komatsu, Bednar, Astragon, Krone, Lindner, Trelleborg, and just announced today – Claas. And we’ve got the exclusive of who the thirteenth team is. It’s none other than French crop spraying pioneers Berthoud.

With so many teams participating in the FSL for the first time, which teams should you be watching for?

The agriculture specialists known for their fertilizer seeds, crop protection sprayers and seed drills are fielding a team of their employees to compete in the inaugural Farming Simulator League. Their earnest goal of plowing their way to the top of FSL is not what makes them so endearing: the organization disclosed to Lisertan that they will donate their winnings to charity.

CLAAS’s involvement in Farming Simulator has been evident over the years. Not only did they partner with Farming Simulator 19 earlier in the year to bring in-game features, but they are also hosting FarmCon 19 at their headquarters in Harsewinkel, Germany. CLAAS announced they are also going to compete in the FSL with their very own employee-fielded team.

The last seeded team to join the FSL is BERTHOUD. Following in the footsteps, or should we say tracks, of several teams, BERTHOUD will field a team of BERTHOUD employees.

Trelleborg is one of three times to sign a fan team from last year’s tournaments. They signed a fan team previously called  “Agrartechnik Oberpfalz” who came in second at The Herofest last year. After Agrartechnik’s impressive placing as a fan team at Herofest, it’s no wonder that Trelleborg signed the team for the 2019/2020 FSL season.

There are high hopes for the FSL, both from the fans and from the team behind the league. Lisertan’s focus isn’t just on getting sponsors or more teams – it’s about creating that opportunity to be “esports for everyone.” He told us that their game is perfect to bring esports to players who wouldn’t count as the stereotypical gamers.

This is why GIANTS have such a focus on supporting fan-made teams or the wild card teams. They want to give everyone a chance and while it might be “hard to make it to the top”, it’s entirely possible for WCs to make it to the top. FSL doesn’t want a closed-off league that will not allow others to join unless they make it onto a franchised team – they want everyone to get their shot.

Lisertan and the rest of the team at Farming Simulator want to see the League expand to support players from around the world, not just in the EU. GIANTS is currently in talks to bring the League overseas to places like the United States, but it’s a future goal assuming that the FSL’s first year goes well.

And for veteran esports fans, FSL has hopes of creating a second-tier circuit to create opportunities for growth. This could be something as simple as supporting with streamers and players with mini-tournaments or having a second league that would give “wild card teams something to fight for on their own.”

Be sure to head over to FSL’s Twitch on Saturday and Sunday to watch the 26 teams harvest and bale their way to victory.