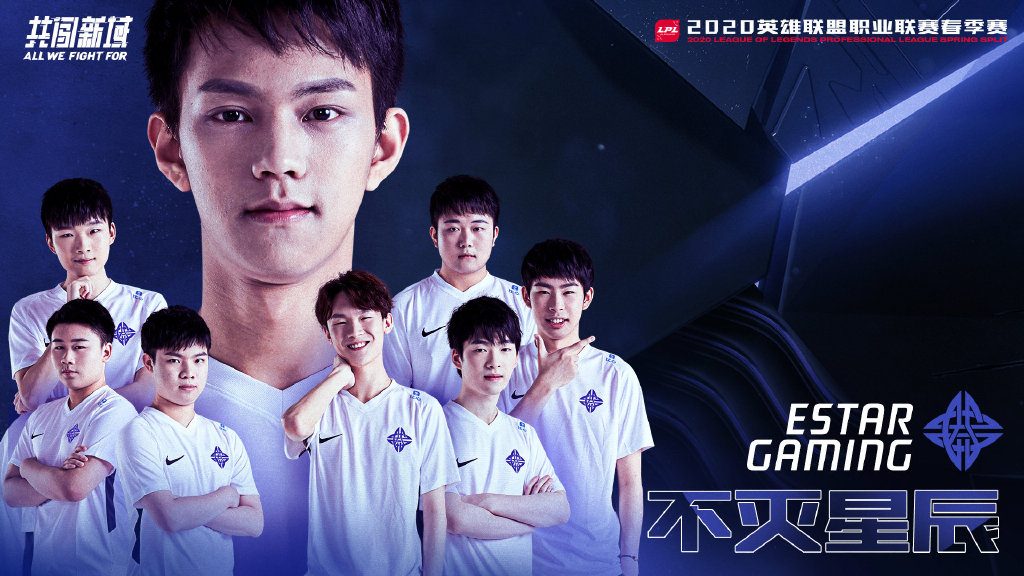 eStar have taken the LPL by storm. A week one upset of FunPlus Phoenix showed their promise, while a 6-1 start to the season cemented them as a legitimate contender in their inaugural season. Now, a 2-0 beatdown of the previously undefeated Invictus Gaming has moved the rookie squad to the top of the standings in the LPL. 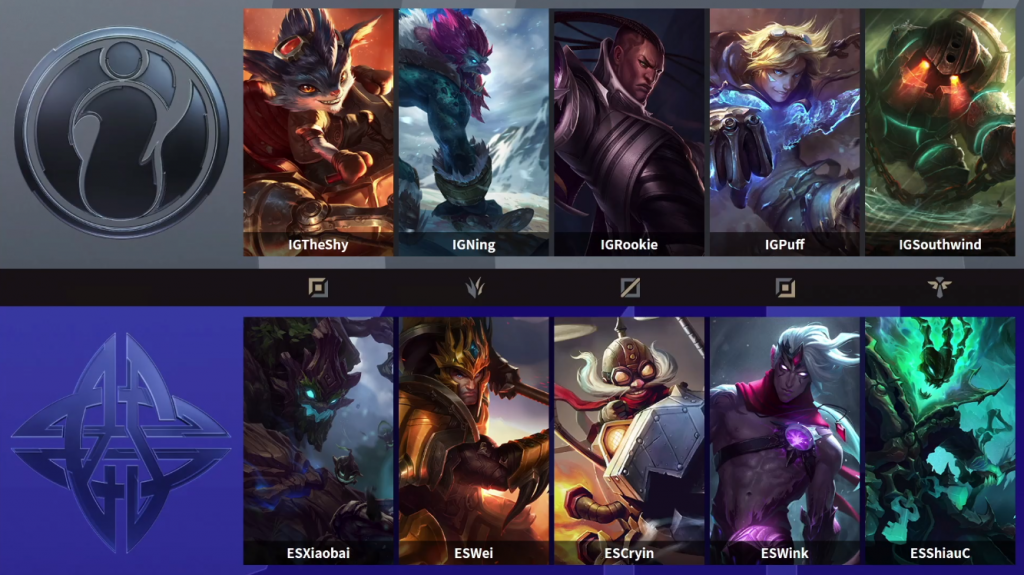 Both teams heavily targeted the top lane champion pool in the ban phase. Invictus Gaming banned Renekton, Sett, and Irelia from blue side, while eStar banned Neeko and Kang “TheShy” Seung-lok’s Kalista. iG first picked Rumble, seemingly leaving the door open for a flex pick. They then picked Lucian in their next rotation, allowing eStar to see both iG solo laners before committing one themselves.

Though iG could still put them in either lane, eStar felt comfortable putting Yang “Xiaobai” Zhong-He on Maokai and Yuan “Cryin” Cheng-Wei on Corki into either matchup. iG decided to match up melee with melee and ranged with ranged, instead of opting into equally lopsided matchups.

With a strong level two ganker in Jarvan IV, it was no surprise that eStar picked up First Blood. Yan “Wei” Yang-Wei cleared a straightforward path from red buff, to blue buff, to bot gank at 2:20. Both bot lanes had yet to hit level 2, so Liu “ShiauC” Chia-Hao flash flayed to start the engage. With no support from their jungler or solo laners, iG’s bot lane were left for dead and Zhang “Wink” Rui’s Varus was gifted an early double kill.

The pace of the game slowed until iG attempted a four-man dive bot lane at 13 minutes. iG were able to pick up Cryin to start the fight, but the five-man collapse of eStar was too strong. Xiaobai had a perfect Maokai teleport flank into Nature’s Grasp to lock up a retreating iG. With Ding “Puff” Wang pushing the mid wave, iG were outnumbered in between two eStar turrets. That’s not a great place to be. eStar picked up the four remaining iG members for zero of their own, upping their kill lead to 6 to 1.

With a healthy 2k gold lead at 13 minutes, eStar were in control of the game. Invictus Gaming’s opt-into-any-fight mentality makes them exciting to watch, but it also makes them one of the easiest teams to snowball. eStar picked up 12 of the final 13 kills of the game to win an 18 kills to 2 route over iG. All of eStar looked great, but ShiauC’s Thresh hooks stood out to earn him game MVP. He finished 2/0/14.

Invictus Gaming’s composition made sense. They had lane bully solo laners, Trundle to counter Maokai in team fights, and a safe ADC in Ezreal to play the weak side. But eStar countered iG’s plan perfectly by getting a gank off bot lane before Ezreal could hit 2 and level up Arcane Shift. Nautilus support offers no protection. The early kills allowed eStar to control the first two drakes and put pressure on iG to over-force a fight, resulting in iG diving between two turrets bot. eStar’s decision making was as impressive as their mechanical plays in game one. 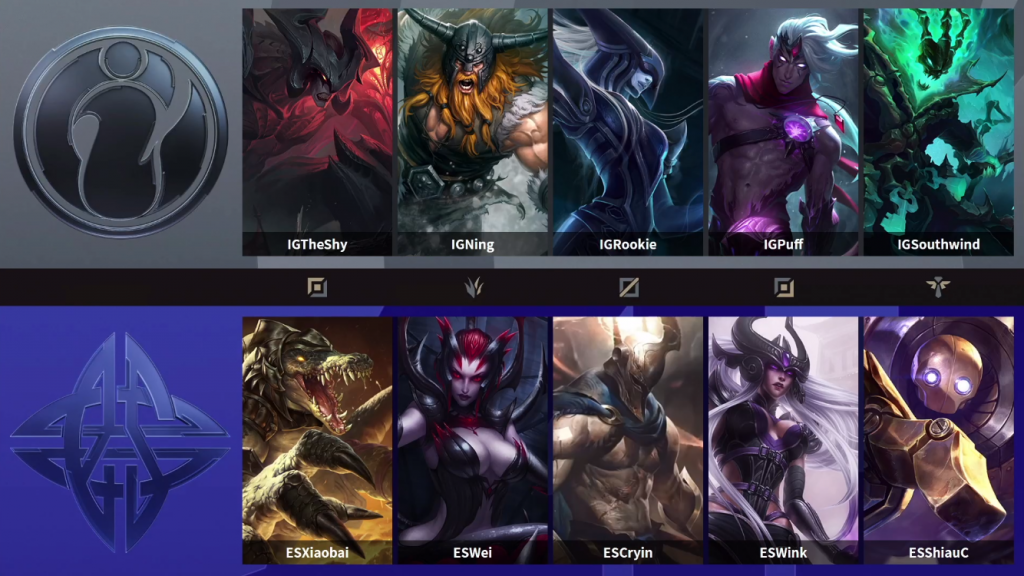 eStar kept their same bans in game two, but iG switched things up. They banned out Wei’s Jarvan IV and instead first picked Wink’s Varus. eStar shrugged off the Jarvan ban and picked Elise, who basically serves the same early game ganking purpose. Her magic damage also pairs well with their Renekton pick, who eStar were now able to grab after iG had to drop that ban from game one. iG even went as far as to pick away Thresh from ShiauC in their first rotation. They had a clear emphasis on taking away eStar’s comfort picks.

iG also allowed both of their solos to counter pick their lanes. TheShy opted into the Aatrox versus Renekton matchup, while Rookie picked Lissandra into Pantheon. ShiauC was given last pick for his support for the second consecutive game. He didn’t disappoint, picking Blitzcrank to round out eStar’s pick composition. If iG wanted to take away his hook threat, all they did was push him onto a champion with a longer range.

We saw eStar execute their early game power again with a three-man play top at 3:30. Cryin pushed his wave and roamed top, giving eStar the extra player they needed in the 3v2. Rookie teleported to join the fight in progress, but Cryin’s early arrival allowed eStar to burst down Gao “Ning” Zhen-Ning. Another First Blood and early exchange went eStar’s way.

Only a minute later, Cryin solo killed Rookie mid while Wink and ShiauC picked up a 2v2 kill on Puff. With priority in both mid and bot, eStar had the run of the map immediately in game two. That’s exactly where you want to be when you have the pick potential of Elise, Pantheon, Syndra, and Blitzcrank. eStar just constantly roamed between the lanes, picking odd-numbered fights with ease. When TheShy and Ning got 1v2 killed by Xiaobai in the only lane iG had been winning, the game was essentially over at 7 minutes.

Sure, eStar took 32 minutes to close it out, but they were just having fun killing iG over and over. They amassed 35 kills in those 32 minutes. Adding those totals to game one, eStar beat down iG 53 kills to six in 65 minutes of game time. That is an absolute slaughter.

For as slow-paced as the other regions have looked to begin 2020, eStar displayed the power of an early game composition played to perfection. That they did it twice in a row to the previously undefeated iG — even while being targeted out in champion select — points to the force they’ve become in their inaugural season. eStar are now appointment viewing in the LPL. The next appointment is Friday, March 27th at 2 a.m. PST against LNG Esports.