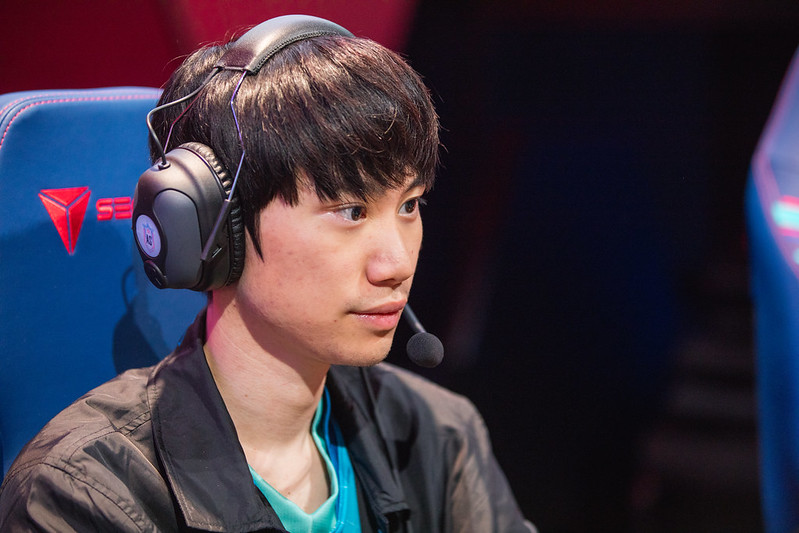 Doinb picked up his seventh game MVP in his seventh match of the season. (Photo courtesy Tina Jo - Riot Games)

We’ve wrapped up week three of the LoL Pro League (LPL) 2020 Spring Split. Newcomers eStar are taking the league by storm, winning twice more to run their record to 6-1. Meanwhile, Bilibili Gaming are now mired in a five game loss streak. We take a look at where things stand in the LPL by looking at the top story lines so far in China.

Nobody knew what to expect of eStar heading into the season. Their only player with top level experience, support Liu “ShiauC” Chia-Hao, came from the LMS. The rest of the team are rookies, albeit some of the best performers in the LDL. Owner Liu “PDD” Mou has been known for producing elite talent, but it had never translated into a team being promoted to the LPL.

Week one was impressive for eStar. They won their first match against Rogue Warriors before upsetting the reigning World Champions FunPlus Phoenix. Then, after the long hiatus, eStar finished week two with a respectable 2-1 record. Wins against Suning and LGD Gaming were nice, but a 0-2 loss to EDward Gaming’s substitute squad gave a moment of pause. Was it just a single series loss in a packed schedule, or a sign that the team was being figured out by the rest of the league?

eStar answered that by going 2-0 in week three. They kicked off the week by easily handling Victory Five. They needed only 27 minutes to win game one by a score of eight kills to seven, before grinding out a 22 kills to 15 win for the series sweep. Even if V5 are one of the worst teams in the league, it was important to see that kind of response from a young team after their first loss.

The win against Bilibili Gaming lends even more credibility to their talent. eStar got crushed in game one, losing 20 kills to five. They were also down three kills to zero early in game two and looked like they would lose the series. Instead, they bounced back by getting several picks and controlling every dragon. After getting Mountain Soul, they used two Elder Drakes to secure game two in 44 minutes. eStar then absolutely stomped game three, winning 24 kills to two in 25 minutes.

eStar have the luxury of having rookie stars in their carry roles. Zhang “Wink” Rui already looks like the next great Chinese ADC. Through 17 games, he is fourth among LPL ADCs in KDA (7.2), first in CS per minute (10.15), first in gold per minute (474), and second in gold share (26%).

Add in the veteran experience from ShiauC, and eStar have found a recipe for instant success. ShiauC was less heralded than other LMS players like Hu “SwordArt” Shuo-Chieh, Huang “Maple” Yi-Tang, and Chu “FoFo” Chun-Lan, but has already made a bigger impact in his transition to the LPL. His veteran shot calling and willingness to engage in such an aggressive league has translated perfectly to his new team.

Tougher tests await eStar, especially in their next match against Invictus Gaming. But regardless of the outcome, it has already become clear that they are a force in the LPL.

We know that Doinb has been very good for a long time. He’s been the LPL MVP in both 2017 Spring and 2019 Spring and led his team to a World Championship title in 2019. But still there is a perception that he’s not on the same level as some of the other elite mids in the LPL. After losing to FPX at the World Championship, Fnatic mid laner Tim “Nemesis” Lipovšek said of him: “I think Doinb in my opinion is one of the worst mids at the tournament.”

While Nemesis was talking about Doinb’s laning ability, his comments set off a debate over his performance at Worlds. Did it matter that Doinb wasn’t the best mid laner at CSing, taking trades, or winning his lane matchup as hard as possible? Is that what matters most, as opposed to the synergy he had with Gao “Tian” Tian-Liang and the incredible shot calling that made FPX one of the most well coordinated teams of all-time?

The criticism may not have affected Doinb in the slightest, but he is playing some of his best individual games of his career this season. Through three weeks, Doinb already has 7 game MVPs — as many as he had during the entire 2019 Summer Split. He picked up one in each of his three series wins in week three.

The first came in game one against Team WE. FPX gave him the red side counter pick into Zoe, and Doinb chose Kassadin. Kassadin is not the standard Doinb pick. He has no influence on the game early, doesn’t shove out waves well, and is on the back foot for the majority of the early laning phase. But what he does do well is roam when he hits six. Doinb was an instant playmaker when he leveled up, racking up an 8/0/4 score line and a nice pentakill in FPX’s 17 kills to 4 stomp.

The next was game one against Suning. Doinb got counter pick again, this time opting for Kled into Pantheon. Suning tried to three-man gank him at six minutes, but Doinb turned it around for a kill of his own and got the snowball going. FPX would finish the game before Baron even spawned. Doinb’s finished 6/0/10 on Kled.

The final MVP of the week was in game one against Royal Never Give Up. This time, FPX early picked Aatrox for Doinb and allowed Li “Xiaohu” Yuan-Hao to pick Sylas into him. It really didn’t make any difference. Lu “Betty” Yu-Hung tried to keep things close, but Doinb just ran RNG down in fights, amassing a 6/0/5 score.

Doinb’s seven MVPs are first in the LPL, just ahead of JD Gaming’s jungler Seo “Kanavi” Jin-hyeok. If Doinb continues at his current pace, he should add more hardware to his trophy case at the end of this season.

Even though Bilibili Gaming lost Lee “Kuro” Seo-haeng to KT Rolster in the off-season, there was still a lot of optimism for the new roster. There is no doubt that FoFo is the more dominant, mechanically gifted laner, so the hope was that he and Zeng “Meteor” Guo-Hao would form one of the most dominant mid-jungle duos in the league. Add in Hwang “Kingen” Seong-hoon’s addition to top lane, and you could see how BLG would expect to improve on their 4th place Summer Split finish.

BLG looked fine in the opening week of play. They won both matches, including a 2-1 win over Royal Never Give Up. But things changed after their return from the break. Bilibili Gaming lost both matches in week two, perhaps struggling to adjust to the new online set-up.

Unfortunately, things didn’t get any better in week three. BLG dropped all three matches to run their loss streak to five in a row. While the combined records of eStar, JD Gaming, and Oh My God are an impressive 15-5 so far, we still expected to see better than a 2-5 start to the season for BLG. But where has it gone wrong?

The mid-jungle synergy is not there yet. For all the things Kuro isn’t as a laner, he is one of the best shot callers in mid and certainly helped Meteor to earn 2nd Team All-Pro Jungler last Summer Split. FoFo and Meteor may get to that level eventually — remember that even Lee “Faker” Sang-hyeok and Kim “Clid” Tae-min struggled with this late last year — but they are still building from scratch. It’s interesting to think that the time off may have hurt that synergy, but it’s impossible to know how much time they were able to practice together or what was really on their minds during that difficult time.

Oh My God have already doubled their 2019 Summer Split win total by winning four of their first six matches this season. Even with a weaker schedule, that is an impressive turnaround. Their acquisitions of former Suning players Yang “H4cker” Zhi-Hao and Han “Smlz” Jin added skill and experience to a roster desperately needing both. FunPlus Phoenix are back to being one of the best teams in the world. Doinb is leading the charge and will be looking to extend his league lead in game MVPs.

Betty has played outstanding League of Legends in Jian “Uzi” Zi-Hao’s absence, but you can’t help but wonder if RNG’s struggles find them ushering Uzi back as soon as possible. Rookie jungler Li “XLB” Xiao-Long gives them more of their old Liu “Mlxg” Shi-Yu carry potential, but RNG haven’t looked as coordinated without Hung “Karsa” Hao-Hsuan and Uzi. For JD Gaming, Seo “Kanavi” Jin-hyeok has come out strong on the other side of the Griffin drama, becoming one of the best junglers in the LPL. His six game MVPs is second only to Doinb.