Dylan Falco: “I’ve Made a Huge Shift in How We Approach the Competition” 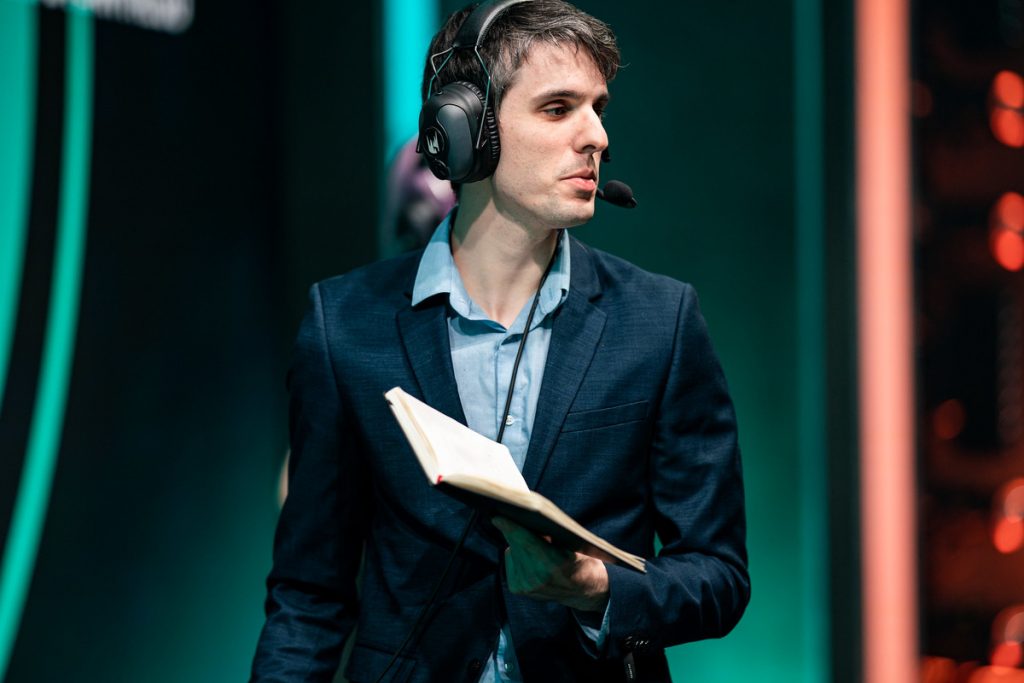 Dylan Falco has finally managed to get Schalke 04 on the scoreboard. Photo by Michal Konkol for Riot Games.

What seemed impossible for weeks has finally happened: Schalke 04 Esports won a game in the LEC Summer Split. After weeks of being haunted by 0-X memes the team finally stepped up to close out a game, convincingly defeating Fnatic. We spoke to Schalke’s Head Coach, Dylan Falco, about the team’s first victory. He walked us through the philosophy behind his “10 man roster” approach, and looked ahead at how Schalke will attempt to turn the tides for the second half of the Summer Split.

Hotspawn: You just had your first win in the Summer Split, emerging victorious against nobody less than Fnatic. Other than happiness, I can imagine you must also be feeling incredibly relieved. What were your expectations heading into this final week before the break?

Dylan Falco: It definitely was a relief. *laughs* I think our viewpoint on this week, compared to the public’s view when they see us going into this week going 0-7, was a bit different. Internally, we’re doing very well in scrims. Coming into this week, we were looking to pick up our first win and we thought that there was a decent chance that we could win one or both games. The weeks haven’t felt hopeless at all. We actually feel like we’re pretty good. It just feels a bit hopeless sometimes after the weekend, when things have gone wrong on stage again.

Hotspawn: Schalke 04 is using a “10 man roster” concept this Split, where you’re actively swapping between your Academy team and your LEC team to find the best possible synergy. How come that you didn’t find the best lineup during the ten weeks of offseason after the Spring Split ended?

Dylan Falco: We did a lot of tryouts throughout the weeks between the Spring Split and Summer Split. We also tried out a number of players that were not on our roster. We came into the Summer Split a bit unsure of what the optimal lineup for us would be. Also, we’re in a unique position in which many members of our Academy team are very close to, or equal to, our main roster and are definitely on an LEC level. I think that is part of what makes our situation a little bit unique.

Hotspawn: Is every position up for debate in the team?

Dylan Falco: In theory, yes. All of our positions are up for change, for sure. There are exceptions, of course. For example: Sertuss was not even in Berlin until today. So it was not likely that he would be playing in matches on stage for us. But yeah, in theory I think that’s something that is important to the organization.

Hotspawn: So the more renowned players on your roster like Odoamne and Abedagge could also be considered to be swapped out?

Hotspawn: The first change you made this Split was to change your bot lane and support players, immediately after the opening weekend. Why did you make this change so quickly?

Dylan Falco: So, at that time we were still splitting scrims between both bot lane duos. It was a tryout phase for us. We were winning more games at the time with our original bot lane. But we had a weakness in our laning phase. I would say that was our biggest weakness. After the first week, we felt that having a stronger laning phase bot would be better for our team on stage. That’s why we decided to play with Neon and Dreams. 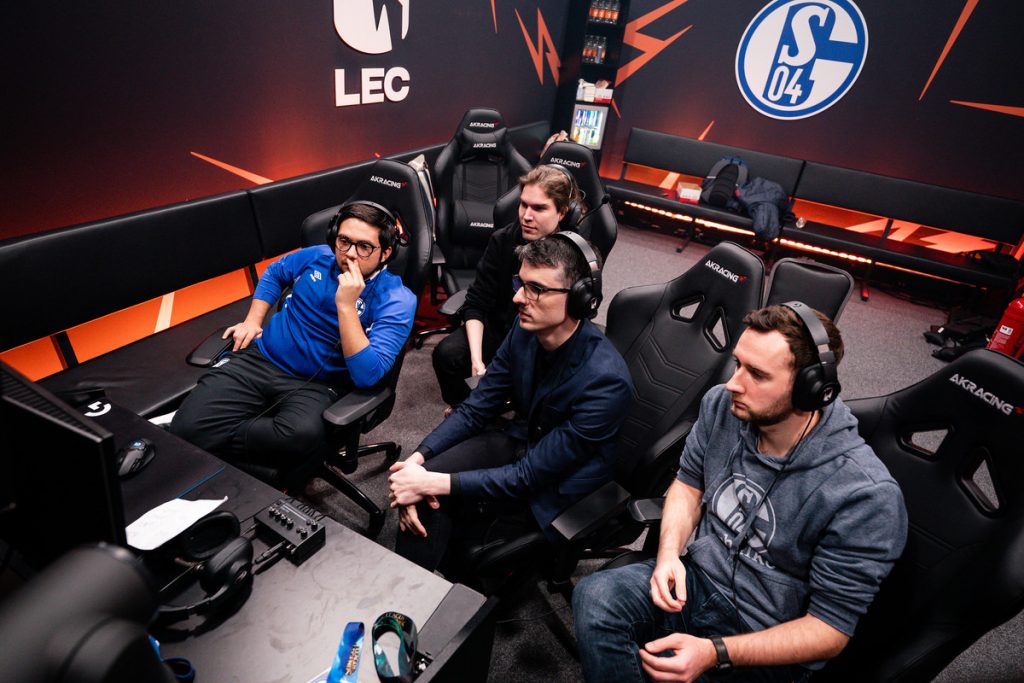 Schalke 04’s staff has a unique approach to using substitutions in the LEC. Photo by Michal Konkol for Riot Games.

Hotspawn: Did you immediately notice that it changed the team’s performance?

Dylan Falco: A change in play style for sure, yeah. They play much more aggressively, which comes with positives and definitely with negatives as well. *laughs* It’s a bit riskier.

Hotspawn: How did the rest of the team respond? You still have three other players that have to adapt to this change.

Dylan Falco: It took some time for them to get used to it, for sure. But it’s not like we were swapping between players that we hadn’t been scrimming with. We had been scrimming with both bot lanes for quite some time. I think it wasn’t as drastic of a change internally.

Hotspawn: Do the players have any influence on the decision of who they want to play with on the main roster?

Dylan Falco: I obviously value the opinion of all my players. I have a lot of experience as a coach and I have a great outside perspective on my players. But yeah, of course, if I’m making these decisions I definitely evaluate what my players think about it. For sure. But I also need to be aware that they can have biases, just as I can.

Hotspawn: You were eventually forced to swap Gilius back in when Lurox couldn’t play because he wasn’t feeling well. How did that change affect the team?

Dylan Falco: Lurox was quite ill last week. Even before our first match, which he still ended up playing on stage but did so with very little practice. We basically had to have Gilius travel to Berlin overnight to come fill in for the next day. Lurox has just been very out of practice because of his sickness. It’s really unfortunate for him, I think. I feel terrible about the situation.

That being said, Gilius coming into the team brought a lot of aggressiveness. He brought a new, fresh attitude. And, at least so far, it has worked very well with the new mindset we have for these weeks of the LEC.

Hotspawn: What do you mean with a ‘new mindset’?

Dylan Falco: In a lot of our match preparation early in the Split, I think a lot of our focus was more on our enemies. We were more focused on how we were not going to lose the game, being afraid of matchups, being afraid of things people could do. I’ve made a huge shift in how we approach the competition, starting with this week. We’re putting more focus on the things we can do to win. What we can do to be active, to make plays, to be aggressive, so we can force our enemies into uncomfortable situations.

Hotspawn: So you’re playing your own game more, now.

Dylan Falco: Well, it’s more about playing more actively and more aggressively. Drafting is a big part of that too. Draft and play are completely intertwined, right? You can’t just say “enemy teams are diving us a lot, and we’re never aggressive early” when all you draft are champions who can’t do that in return. So it’s a full shift in how we approach the game.

Hotspawn: There still is a lot of work to do with this roster to have a chance of making it to the Playoffs. Heading into the next two weeks off before the LEC resumes, what does the schedule look like?

Dylan Falco: We’re going to take a few days off and then do a lot of practice for the next week of the LEC. I think we’ll all be pretty excited and have a pretty good attitude going into this. I think we did a very good job this weekend of playing proactively in both games. I think in the first game we got three dragons, two Rift Heralds… At least from a preparation standpoint, it was a game where the enemy team composition really beat our team composition. We kind of got what we wanted from the ‘being active’ part, but we were on a timer in-game. Today, I really liked that our preparation was done so that we could be extremely active, but also just win at all points in the game. Getting that done consistently would be the dream.

Hotspawn: It’s a steep hill to climb, but thankfully you’re being very optimistic. How confident are you that this team will pull themselves up by the bootstraps and deliver in the next half of the Summer Split.

Dylan Falco: I am almost certain that we’ll win more than one game in the second half. *laughs* I’ve seen too much footage of our team playing behind the scenes to not believe in them. Now that we have that first win, I know that we will do better. Making Playoffs is obviously very, very hard. It is kind of lucky that every single team from fourth to ninth place seems to be beating each other in the most even way possible. *laughs* That gives us at least a chance!

Schalke 04’s next match in the LEC will be against SK Gaming on July 17th at 6 pm CEST.