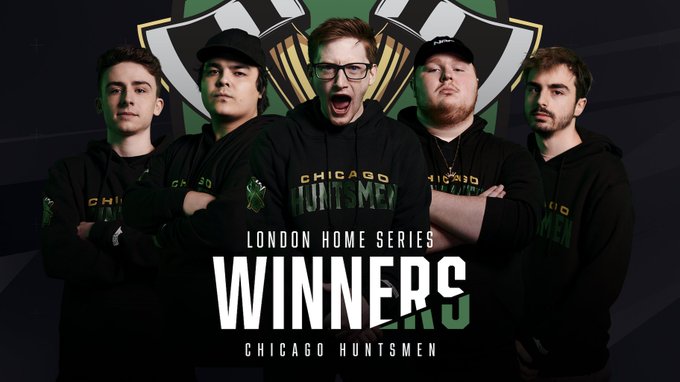 The first Home Series of the Call of Duty League took place over the weekend and was full of production delays, commercial interruptions, and a little bit of pro Call of Duty. Different from Opening Weekend, the homestand weekends are now played in more a tournament style format with groups and a playoff bracket. Chicago Huntsmen emerged the victors but did not have an easy road to success. Other teams who were under the radar going into the season have established themselves as contenders in the league and were able to eliminate higher ranked teams from the tournament.

The first match of Group A was between Dallas Empire and Seattle Surge. Dallas is one of the best teams in the league but had a poor performance in the opening weekend. Seattle put up a strong fight on each map and even took the Search and Destroy match to the 11th round. Dallas secured the map in the end and achieved a 3-0 victory.

Chicago Huntsmen and Los Angeles Guerrillas were up next in Group A. The first map was an easy win for Chicago who secured a 250-158 Hardpoint win. Guerrillas were able to win three rounds in Search and Destroy on St. Petrograd but ultimately fell short. Los Angeles was almost able to force a fourth match in the series but lost by two points in Domination. Huntsmen achieved a 3-0 sweep and continued to dominate the league.

SWEEP for the Chicago @Huntsmen, they make short work of the @LAGuerrillas and move on in the Winners side of group stage! #BeTheHunter pic.twitter.com/cHB732Pg8k

Dallas and Chicago are two of the best teams in the league. They kicked off the Call of Duty League last weekend with the highest viewership which saw Chicago achieve a 3-1 victory. Dallas had the opportunity to redeem themselves but ultimately fell short.

Chicago came out strong and won a Hardpoint match on Gun Runner by 100 points. The second match was Search and Destroy on Piccadilly which was a back and forth battle that went into the 11th round. Chicago secured the final round and took a 2-0 series lead.

Dallas was able to avoid defeat briefly and won a domination match on Hackney Yard. Chicago was not fazed and finished the series with a Hardpoint win on St. Petrograd.

Seattle Surge and Los Angeles Guerillas went head to head in an intense five match series. Los Angeles started off strong and won the first two maps. Seattle Surge refocused before the third map and won a tough Domination match. They continued their winning streak with a Hardpoint win on Azhir Cave and forced a fifth game.

The final Search and Destroy match on St. Petrograd went to the 11th round and allowed Seattle Surge to achieve the second reverse sweep of the weekend.

Seattle faced Dallas in their second match of the day and was unable to defeat the dominant team. Seattle was able to win a domination match and force a fourth match, but Dallas extinguished any hope of victory with a final Hardpoint win.

Dallas advance to the semifinals vs the home team London @RoyalRavens. pic.twitter.com/TdbHWsN4IF

Group B started off with New York Subliners and Paris Legion. Paris had a great start in the Call of Duty League Launch Weekend and proved they were not a team to be ignored. Subliners were looking to redeem themselves after losing both of their matches last weekend and were able to secure a 3-1 win over Paris.

London Royal Ravens were a wild card going into the season. The London crowd loved their home team and rallied around the players during each match.  Royal Ravens were able to beat Toronto Ultra in a 3-1 victory. Ultra went 1-1 during the Launch weekend and but were unable to secure a series win against London.

The final match in Group B was between London Ravens and New York Subliners. Royal Ravens proved they were a solid team when they swept the New York Subliners during Launch Weekend. New York was not ready to let history repeat itself. New York came out strong and won the first two maps, but London was able to pull off amazing plays that kept the matches exciting.

London Royal Ravens re-grouped and won the third domination match on Hackney Yard. The young team showed just how talented they were by making a comeback and reverse swept New York. Day one ended with a hometown victory.

Toronto Ultra and Paris Legion were the first match in the Group B losers bracket. Ultra won the first Hardpoint match with ease but fell short in the rest of the series. Paris was able to take three easy victories and eliminated Ultra form the Home Series.

New York continued to have bad luck against the European teams and was eliminated in a 3-0 victory for the Paris Legion.

London and Dallas were the first match of the semifinals. London was able to secure an eight-point victory on Hardpoint and a 11th round search and destroy win. Dallas did not crumble under pressure and was able to shift the third match in their favor.

Dallas won a Domination match on Hackney Yard which gave them a much-needed momentum boost. They were able to win the next Hardpoint match and forced the series to go to game five. The final match was Search and Destroy on Piccadilly. The match went to round 11th where Dallas was able to deliver the final blow and eliminate the hometown team.

They’re headed to the Finals to take on the winner of @Huntsmen and @ParisLegion. pic.twitter.com/Al7qfuohhY

Paris Legion was determined to make it to the Grand Finals. They won the first Hardpoint match and were able to beat rotations and hold points successfully. Chicago fought back on the second Search and Destroy match and achieved a quick 6-2 victory. Chicago continued to dominate in map three and secured a 215-110 domination win.

Paris did not give up and won a Hardpoint match which forced the series to game five. Chicago sealed the deal with a 6-0 victory that eliminated Paris and secured their spot in the Grand Final.

Chicago had already defeated Dallas twice and only dropped two maps in the first two matches. Huntsmen were not willing to lose another match and delivered a quick defeat to Dallas with a 3-0 sweep.

The first Hardpoint match on Azhir Cave was intense and both teams performed very well. James “Clayster” Eubanks and Ian “Crimsix” Porter each had 39 kills but were unable to turn the tides in Dallas’ favor.

Map two was Search and Destroy on Arklov Peak. Dallas won the map during the launch weekend but was unable to replicate the success. Chicago won the map with a 6-5 victory taking a 2-0 lead.

Chicago @Huntsmen now 2-0 up on the @DallasEmpire in the Finals! #BeTheHunter

Dallas came out strong in the first half of Domination on St. Petrograd and secured a 100-87 lead. Chicago shifted momentum and triple capped early in the second half which ultimately allowed them to take the lead and close out the series.

The London Home Series allowed Chicago Huntsmen to maintain their dominant position in the league and established the European teams as competitive powerhouses. The next Call of Duty League Home Series takes place February 22nd – 23rd in Atlanta, Georgia and will allow other teams to establish themselves in the league.