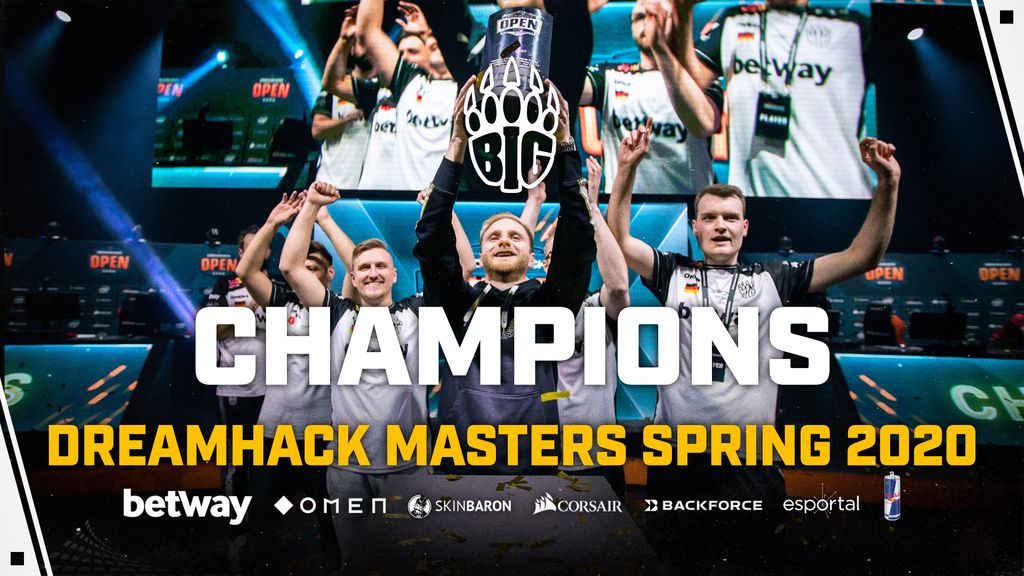 DreamHack Masters Spring was certainly an interesting tournament all the way through. Starting in the Group Stage, three of the four groups weren’t won by the highest-rated team present. Mousesports were even eliminated with a 0-3 record while BIG went undefeated in the same group.

Titans Brawl it Out

G2 Esports joined BIG in the Upper Bracket alongside FaZe Clan and Natus Vincere. The first matchup between G2 and Na’Vi was a battle between the top two rated teams. This unofficial title match saw G2 pick Mirage while Na’Vi opted into Dust2 with a Nuke tiebreaker.

Na’Vi won the pistol round to take a 4-0 lead, but G2 came to their map prepared. Once they had their weapons, the T side plan came together.

G2 won eight of the remaining 11 rounds to earn an 8-7 half time lead. Unfortunately for them, Na’Vi would once again win the pistol round and get four rounds from it. From that point, Na’Vi only earned two rounds in the time it took G2 to hit match point. However, Na’Vi was able to pull the map to overtime at the last moment.

It would take two OT’s to decide a winner. Despite Na’Vi’s star player Aleksandr “s1mple” Kostyliev having a rough game, the rest of the team stepped up to make it competitive. In the end, however, it was G2 who crossed the finish line first for a 22-19 win.

Na’Vi hoped to even up the series on their Dust2 pick, however, they looked spent after the long Mirage game. Despite the map being slightly T sided, Na’Vi fell to a 6-9 deficit on their attack. Even winning their third pistol round of the match only brought them to ten rounds. G2 then easily clinched the map 16-12 to sweep the series.

On the other side of the Upper Bracket, FaZe vs BIG was a much less hotly anticipated match. It was easy to dismiss BIG’s Group Stage success as them being in a weak group with a faltering mousesports and two other mid-tier teams. BIG would dispel this narrative with overwhelming force.

BIG started out hot on their map of Nuke. Eight rounds on the unfavored T side put them in a great position close out the map. FaZe’s T side was much less impressive. They were only able to find two rounds as BIG stopped them in their tracks. The map ended in a clean 16-9 courtesy of Nils “k1to” Gruhne.

That dominance would continue on FaZe’s Inferno. Any remaining cries of fluke were silenced as BIG tore FaZe to the ground. A 10-5 CT half for BIG was followed by a flawless attack. The clean 6-0 T side ended this map faster than the first, BIG taking the 16-5 win and 2-0 sweep.

Meanwhile, the eight teams relegated to the Lower Bracket were all fighting for their tournament lives. The first round went about as expected, with Fnatic, MAD Lions, and Vitality taking wins over Complexity, Team Spirit, and Heroic respectively. Ninjas in Pyjamas also toppled the still rebuilding Astralis. It wasn’t exactly an upset, just more evidence that this new Astralis squad needs more work.

Round two saw the competition heat up. First was Fnatic vs MAD Lions. Each team comfortably took their own map picks, leading into a Mirage tiebreaker. The first half was Fnatic favored, as their T side garnered nine rounds. Despite the deficit, MAD Lions put together a nearly perfect T side of their own. Frederik “acoR” Gyldstrand and Lucas “Bubzkji” Andersen combined for 55 kills and 221.4 ADR. Their impressive performance granted MAD Lions the 16-10 win and a date with Na’Vi.

The other matchup between Vitality and NiP went exactly the same way. After NiP won their Mirage 16-5 and Vitality won their Nuke 16-3, the stage was set for a tiebreaker on Inferno. While the score on paper reflected a decently close game, the reality was that NiP completely outclassed the French squad. Every single player on the Ninjas had an HLTV rating of 1.20 and above, meanwhile, no Vitality player earned more than a 0.86. After winning 16-11, NiP’s next opponent would be FaZe Clan.

Although Na’Vi and FaZe Clan were on the receiving end of 2-0 defeats in their first matches, they made Upper Bracket for a reason. Na’Vi demonstrated that fact in their matchup against MAD Lions. On the Lions’ own Mirage pick, Na’Vi laid down a dominant defensive half. The 11-4 lead was followed by a quick T side in which Na’Vi took five of six. After winning map one, the teams moved on to Overpass. The first half was close, with Na’Vi barely earning an 8-7 lead. The second, however, was a total stomp. Na’Vi’s CT side went flawless, closing it out 16-7 and moving onto Lower Bracket Semifinals.

NiP at least were competitive against FaZe Clan, but they met the same fate as the Lions. The teams actually traded map picks to bring the match to Inferno. After NiP went on an early five-round streak to start their T side, FaZe took over. They won nine in a row to secure a 10-5 lead. Led by Nikola “NiKo” Kovač on the attack, FaZe stayed a step ahead of NiP to close out the series with a 16-13 win.

In the Upper Bracket Finals, G2 were on the winning end of a polarizing three map series. The teams traded map picks decisively, with G2 taking Nuke 16-5 and BIG winning Dust2 16-6. A 16-7 on Mirage then put G2 into the Grand Finals with a one map advantage. The challenger had yet to be decided.

With Na’Vi and FaZe dueling it out, only the top four teams from Groups were left. Despite Na’Vi’s dismantling of MAD Lions, they were unable to put up much of a fight. FaZe’s 8-7 lead on T side Mirage was quickly increased on their defense. Na’Vi were left reeling after countless pushes were shut down. Map one went to FaZe courtesy of a pop-off performance by Aurimas “Bymas” Pipiras.

Na’Vi’s Dust2 pick went just as poorly. They ceded a 10-5 lead to FaZe’s CT side then failed to find the same level of success. Bymas continued his form, earning his best HLTV rating as a member of FaZe Clan yet. FaZe took map two 16-11 as well, securing a rematch with BIG in Lower Bracket Finals.

Despite losing their own map to G2, BIG doubled down on Nuke by picking it again. This time, it paid off. The 16-4 thrashing was the second most decisive win through all of the playoffs. The real battle came on Mirage. Both teams held down the fort on CT side, earning 10 rounds. One overtime was not enough after back to back clutches kept FaZe in the game. However, they ran out of steam right after. BIG were able to repeat their 2-0 sweep over FaZe with a 22-19 finish.

The stage was set for a rematch of Winners’ Finals. G2 vs BIG would start off with G2 at a one map lead and with map priority. The French-Serbian squad chose their best map to kick things off in Vertigo. It was no contest, as G2 pummeled BIG into submission. A strong 16-6 finish put G2 in championship position. They only needed one more map and had three chances to do so.

BIG would not go quietly into the night. Their first map was Nuke as always. This time, they made sure to show G2 why. After losing pistol and the following two rounds, the BIG T side put together 11 of their own. G2 were not nearly as prepared, only managing a single round on their attack. Johannes “tabseN” Wodarz had a particularly amazing game, earning 27 kills and 134.7 ADR in just 21 rounds. The 16-5 finish gave BIG a foot in the door.

Surely G2 would have a similar response on Dust2, the map they lost to BIG in their previous matchup. However, that wouldn’t be the case. In fact, it was more of the exact same. BIG’s CT side was absolutely dominant against G2. None of the G2 strategies seemed to work against BIG’s perfect team play and positioning.

With the series tied at 2-2, Mirage would be the final battlefield. Unlike the previous two maps which were very one-sided, this decider would go down to the wire. At first, G2 looked like they had fully woken up. Their CT side started off as dominant as could be. The peak lead was 10-1 for G2, nearly unthinkable for BIG to come back from. However, all comebacks start with a spark. BIG managed to win three of the last four rounds of the half, cutting the deficit to 11-4.

Now on defense, BIG got to work. They won the pistol round with a defuse then converted the following two rounds. When guns came out, it was a true battle for economy. The initial buy rounds were traded back and forth with both teams taking wins with bad buys. Eventually, BIG came out ahead thanks to the Scout of Florian “syrsoN” Rische. SyrsoN wouldn’t slow down once he got his AWP either. In what turned into a career game, he earned a whopping 41 kills and 119.4 ADR, good for a 1.81 HLTV rating. Countless rounds were saved by syrsoN as BIG pulled back into contention.

That initial 10-1 deficit was erased completely when BIG took the 30th round to force overtime. After trading the first two rounds, syrsoN gave BIG their first lead of the map with an aggressive AWP push into Apartments.

With the sides swapped, the teams once again traded the first two rounds. With the tournament on the line, BIG performed an A site split. All of their aim duels were won, securing the 19-17 victory and the 3-2 reverse sweep.

This win marks one of the most unexpected and historic runs in a top tier CS:GO event. From their perfect Group Stage performance to the first reverse sweep in a BO5 with a granted map, BIG have certainly made many fans on this day. BIG started their campaign at DreamHack Leipzig Open at the start of the year. No one would believe that they would take the main event half a year later. This win will surely be remembered for a long time to come.