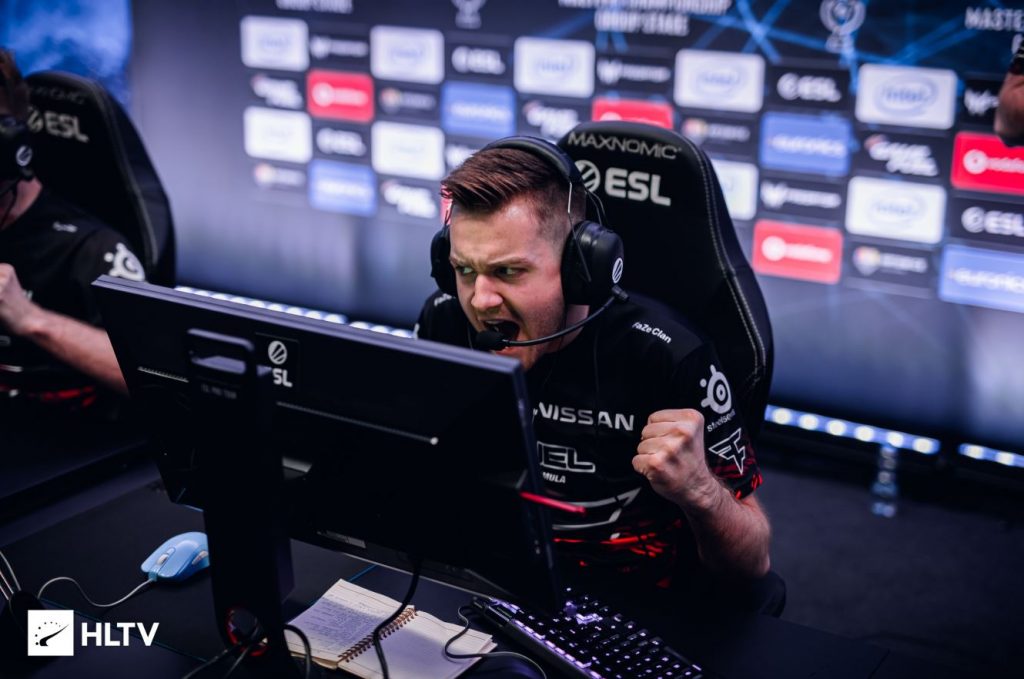 The Group Stage for DreamHack Masters Europe has ended. Of the 16 teams who stepped into the ring, 12 have advanced to the playoffs while four have been sent home. While there were a couple of surprises, the end results were mostly standard.

The first group at DreamHack Masters Europe was a faceoff between three of the four Danish teams at the event in Astralis, Heroic, and North, plus G2 Esports. Day one saw Astralis dispel Heroic in one of the closest 2-0’s possible. Heroic pulled back a 4-11 halftime deficit to force OT, but eventually fell to Astralis 19-16. On Inferno, Heroic took a 10-5 lead but couldn’t close out the match as Astralis put up a stalwart defense to take the 16-14.

Meanwhile, G2 had their hands full with North. The teams comfortably took their own map picks before moving onto the Dust2 tiebreaker. Despite jumping out to a 13-7 lead, G2 had a hard time stopping the North attack. Round after round went to the Danes as they won nine of the final ten to steal the series with a 16-14 finish.

On day two, G2 needed to reverse their fortunes. Now against Heroic, the teams once again won their own maps. Mirage would be the decider, and it would go all the way. After two 8-7 halves, overtime was required. As Kenny “kennyS” Schrub broke 30 kills, G2 crawled over the finish line with a 19-17 win.

Their opponents on the final day would be Astralis who had just steamrolled over North in two maps 16-8 and 16-4. The winner earned first seed and a ticket to Upper Bracket Semifinals while the losers had to dredge through the Lower Bracket.

Interestingly, this match also ended in a decisive 2-0 sweep, just not for the expected team. G2’s Dust2 pick was close all the way through. After an 8-7 score at the half, Astralis won the second pistol round and were starting to pull away. That was until François “AmaNEk” Delaunay earned an ace with the MAC-10 against rifles to swing the game back in G2’s favor.

The momentum allowed G2 to string together rounds and take their map 16-13.

Astralis had Nuke in their back pocket, but G2 were no strangers to the map. The French-Serbian squad put together an amazing CT side to lock Astralis out of the map. A 11-4 half time score led into an easy 16-7 closeout for G2 to complete the sweep and earn first seed in Group A. Astralis took second seed while Heroic defeated North to lock in third.

The first week of DreamHack Masters Europe came to a close with the group of life in Group B. BIG, Complexity, and MAD Lions all had a shot at taking first seed over the slumping favorites in mousesports. That slump would continue as mousesports failed to win a game in the group, going 0-3 and being eliminated.

The brawl between the rest of the teams continued for three straight days. BIG’s first match against MAD Lions went to all three maps. Despite MAD Lions stealing BIG’s Mirage pick 16-11, BIG was able to thrash their opposition on Nuke 16-7 then win a close game on Vertigo to solidify the 2-1 match win.

On the second day of play, BIG faced off against mousesports. After a 0-2 loss to Complexity, mousesports wanted to get back to winning ways. They managed to do so with a triple overtime 22-20 win on Nuke. Unfortunately for them, it would be their only map win of DreamHack Masters. BIG’s Vertigo once again came through with a 16-14 win to force a third game on Dust2. BIG earned the biggest win of Group Stage with a 16-2 stomping to stay undefeated.

Complexity had also won their second game against MAD Lions, meaning a day three matchup against BIG would decide first seed. The match would start off strong on Mirage. Both teams earned 9-6 halves on their CT side leading into overtime. Two OTs were needed, Complexity closed it out 22-18 to secure their map. BIG’s Vertigo pick was as guaranteed as ever, giving them a 16-11 win to tie the series at 1-1. The decider map would be Dust2.

Complexity put up a very good T side, gaining a 10-5 lead at the half. However, BIG’s T side was even more phenomenal. All of their players and strategies were on point as BIG won 11 of 12 rounds to pull off a 16-11 comeback.

The 3-0 undefeated record netted BIG first seed while Complexity took the consolation prize in second. And of course, MAD Lions earned third after crushing mousesports on the final day.

DreamHack Group C was the most drama filled of all. The usual top dogs in Fnatic and FaZe Clan had to contend with rising Spirit and GODSENT squads. Day one saw Spirit take down the Swedish giants in a clean 2-0 sweep. That match set the tone for the rest of the group, a face off between an in-form FaZe and an impressive Spirit.

The two would meet on day two in a match that would burn hot. Spirit crushed FaZe on Train. The CIS squad put up 10 rounds on T side of their map pick. FaZe weren’t fully prepared for Train, taking the 7-16 defeat. Dust2 would be their chance back into the series. However, the map got out of hand for FaZe. After Spirit took an 8-7 T half, they shot out to a 14-9 lead on defense.

Still, FaZe started to mount a comeback. The round difference closed smaller and smaller until every single point mattered. During the final rounds, Spirit’s top performer Nikolai “mir” Bitiukov had a power outage.

Since damage had been done, the rounds couldn’t be replayed. FaZe pulled the map to overtime, which the Spirit coach had to play in mir’s place. The map went to FaZe 19-15, forcing a Nuke tiebreaker.

Spirit managed to ring Dmitrii “Dima” Bandurka from ESPADA for it, but the loss of mir was just barely too much to overcome. The map once again required to overtime which went FaZe’s way. The 19-17 finish gave FaZe the 2-1 match victory, but an asterisk could be raised next to it.

On day three of DreamHack Masters Europe, FaZe convincingly took down Fnatic in two maps to earn a 3-0 record and first seed in the Group. Spirit’s match against GODSENT was rescheduled to three days later to try and avoid a similar issue. In the end, Spirit won the match 2-1 and took second seed to the relief of many. However, they will be upset that they didn’t come first. GODSENT’s 0-3 run also put Fnatic through to playoffs in third seed.

Of all the DreamHack groups, Group D was the most stacked on paper. A second ranked Na’Vi squad trying to make up for their failure at Road to Rio faced off against Vitality and Ninjas in Pyjamas with a rebounding ENCE bringing up the rear.

Right off the bat, Na’Vi and Vitality played close three map series. The Frenchmen pulled out Nuke for their map pick and showed great play on their T side start. Na’Vi’s attack left much to be desired as they only earned a single round in the second half. A 16-8 win gave Vitality the first map. Na’Vi’s Dust2 on the other hand was a nail-biter. After going into the half at a 7-8 deficit, Matheiu “ZywOo” Herbaut pulled off multiple 4K’s to bring Vitality to a 14-9 lead.

With their backs against the wall, Na’Vi went to work. They took the final seven rounds in a row with Denis “electronic” Sharipov leading the way at 30 frags. The massive comeback gave Na’Vi the 16-14 win and another map to play. Now hitting a stride, Na’Vi took a massive 12-3 lead on their Overpass CT side. Vitality tried their best, but they couldn’t make up the deficit in the second half. The match went to Na’Vi, setting them up for success in the group.

Despite the impressive first result, Na’Vi’s second match against ENCE was one to forget. Their T side on ENCE’s Train pick looked unprepared, giving up an 11-6 lead by losing 10 of 11 rounds afterwards. Na’Vi then got outmuscled on Dust2 and lost 16-14, giving up a 2-0 sweep. Unsurprisingly, Aleksandr “s1mple” Kostyliev was the only Na’Vi member with a positive K-D ratio.

Still, Na’Vi made up for it against NiP with a 2-0 sweep of their own. The Ninjas couldn’t quite keep up as they lost their own Overpass pick 16-8. They got close on Nuke, but Na’Vi retained their edge long enough to ensure a 16-14 victory to earn first seed in the group.

Elsewhere, Vitality completed a 2-0 sweep of ENCE to put them at a 2-1 record as well. The head-to-head loss against Na’Vi put them in second seed. Finally, NiP’s sweep of ENCE on the final day of play granted them third seed.

After two weeks of Counter-Strike action, we have our final twelve teams at DreamHack Masters Europe. Plenty of rising squads like BIG and Spirit are in contention, as well as the usual powerhouses. Interestingly, we will be seeing Astralis and Fnatic start in the Lower Bracket. Anything can happen when playoffs begin on June 8th.