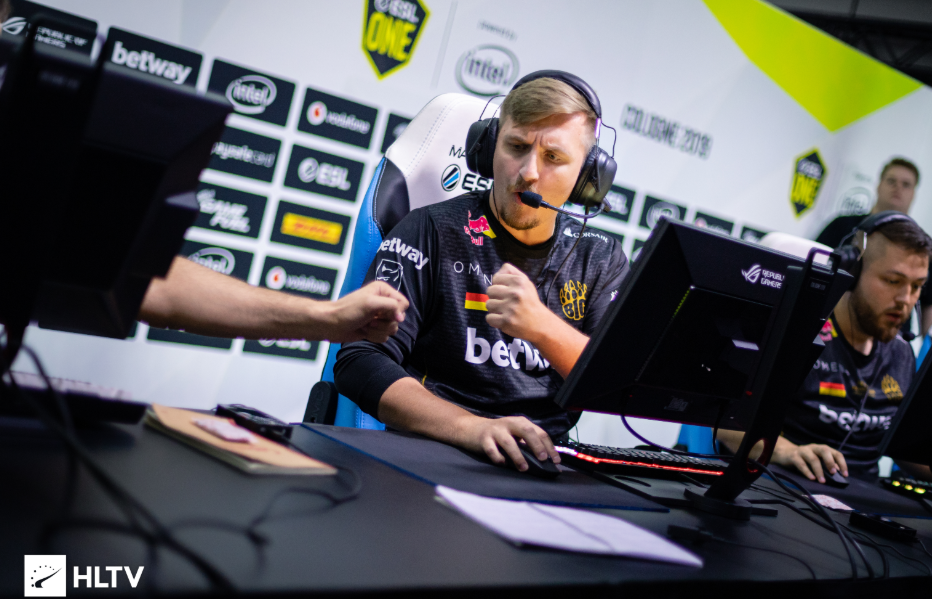 ESL Pro League’s Group B remains unpredictable on its second day of play. BIG have continued their rampage by taking down Na’Vi, the current top team in Counter-Strike. BIG upset Fnatic just two days prior, putting them in the driver’s seat to take the entire group.

The first map was BIG’s pick of Nuke. Na’Vi chose to start on the favored CT side. The pistol round went Na’Vi’s way after getting early picks outside then denying a desperation Vent dive. BIG’s first full buy headed towards the B bombsite, but they couldn’t close out a 3v2 against Na’Vi’s Ramp collapse. Now down 0-4 with no money, BIG forced up with pistols and a MAC-10 to storm the A site. The fast play caught Na’Vi off guard and got BIG on the board. That spark was all BIG needed to get going.

The German side won seven of the next eight rounds with a variety of set plays. The next gun round involved contact A plus a Heaven wrap. Na’Vi took their only round in the streak by defending an Inside A push, so BIG used Outside smokes to bait Na’Vi into rotation before ending on the A site. BIG continued to gain map control from Outside as they hit eight T side Nuke rounds. Na’Vi did recover enough to take the final two rounds of the half, but BIG still held the 8-7 lead.

The second half saw BIG assert their dominance from the first round. Pistol went in their favor, as did the anti-eco round. Na’Vi bought up in the third and headed Outside, but not without taking heavy damage. The clean-up came through as BIG solidified their lead. Na’Vi’s next full buy was also a bust, failing to take the A site late into round 20. BIG earned match point by denying two Na’Vi low buys.

The perfect half was completed with a Ramp defense from Can “XANTARES” Dörtkardeş as BIG took map one 16-7.

Dust2 was Na’Vi’s map pick. BIG opted to start on T side, but they were shut down early. Na’Vi took the pistol courtesy of a 4k from Oleksandr “s1mple” Kostyliev.

One eco round later, guns were out for BIG. They barely dispelled Na’Vi’s MP9 army on the A site to earn their first round. However, Na’Vi took back the momentum by playing passively on A. BIG’s attempt on the B site was too slow as they were wrapped from behind and collapsed on. The Na’Vi lead grew to 8-2 before BIG’s next point. The last four rounds were split evenly between the teams, the score at the half being 10-5 for Na’Vi.

After taking the second pistol and two following rounds, Na’Vi were in firm control of the map. BIG’s first gun round saw them take control across the map which forced Na’Vi into a desperation B push. A second B site defense broke Na’Vi’s economy. The next crucial round saw BIG hold off a five-man Long push. The comeback was in full swing after XANTARES got two kills then held the defuse retaking the A site. Not wanting to let this slip, Na’Vi pulled together two close rounds in a row on A to secure map point.

BIG’s comeback train would not be deterred, as they used the last of their money to stabilize that A defense. After an anti-eco, the score was 15-13. Na’Vi once again tried to walk up Long and take A, but BIG were prepared. Full loss bonus let Na’Vi have one more shot at closing the map, but the Mid to B split was doomed from the start. BIG had taken the game to overtime.

Na’Vi fixed their Mid to B split for the first T round, but the second went the way of BIG after s1mple couldn’t quite complete the 1v4. BIG then took the lead going into the second half. Despite the advantage, BIG also only managed one T round off of Catwalk to A push. Na’Vi lost the first player in the next two rounds, but still managed to hang on by a thread.

OT2 started off with a banger from XANTARES in the Mid doors to take the lead. This time, BIG got a second T round going into their defense. Match point came early as Na’Vi’s Mid to B attack was shut down. A successful Catwalk take gave Na’Vi a final shot at a third overtime. They chose to run it back, but this time Johannes “tabseN” Wodarz was prepared. His 3K on the site secured the 22-20 win for BIG and the 2-0 sweep.

One big storyline stands out within this match. S1mple was an absolute monster, but even he couldn’t carry Na’Vi across the finish line. He put up one of, if not the most impressive performance in a loss ever at a top tier event. S1mple went 81-36 with 119.1 ADR and a 1.79 rating. The next closest person on his team was Denis “electronic” Sharipov with 41 frags. On the BIG side, every single player had more than that amount.

The Na’Vi that won IEM Katowice did so with all of their members performing at their best. When that isn’t happening, the same old Na’Vi comes back. If Na’Vi want any chance at escaping this group after starting 0-2, everyone besides s1mple needs to pick up the pace. For BIG, this is the best start possible. Going 2-0 against the top two teams in the group has them set to advance barring any majorly unforeseen circumstances. ESL Pro League has been unpredictable so far, after all.