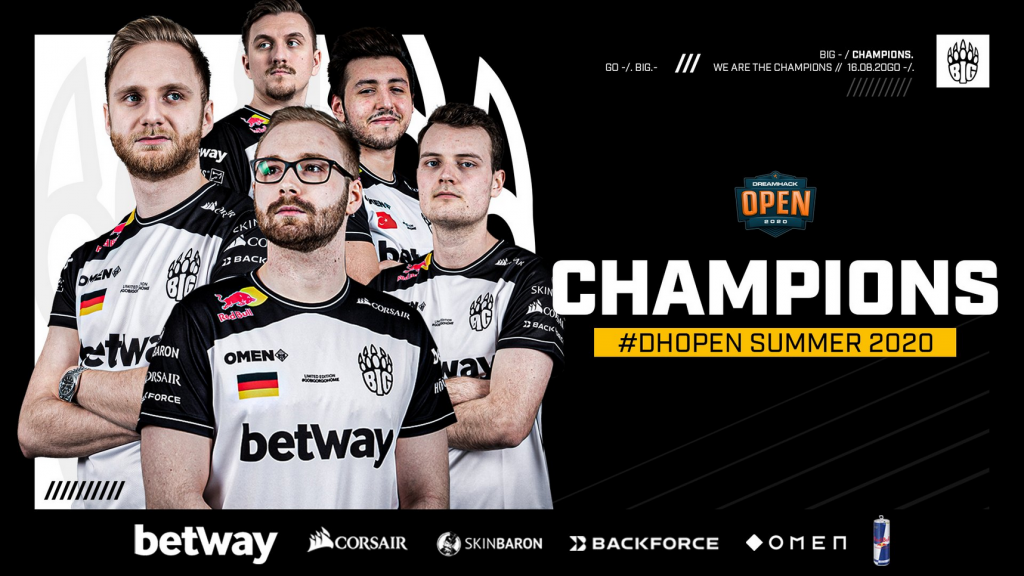 BIG have claimed yet another event win, solidifying their spot as the top-rated roster in Counter-Strike. (Photo courtesy BIG)

DreamHack Open Summer’s European bracket has come to a conclusion. After winning three matches in a row in the Group Stage, BIG have completed their undefeated run to take first place.

THE WINNING JUST DOES NOT STOP! 🔥

We come out of the player break all guns blazing and become the champions of #DHOpen Summer 2020! GGWP @heroicgg! 🏆#GOBIG pic.twitter.com/YRA6wZzGdU

The four team playoffs began with Semifinals. BIG’s opponent was OG, the second-place team from Group B. While BIG were the stronger team on paper, OG are not a team to be underestimated. They showed this by taking their map pick of Inferno comfortably. OG started out on T side and earned 11 rounds. The best BIG could do on their attack was trade point for point. A 16-9 win for OG led to BIG’s Dust2 pick. This time, it was BIG’s turn to show their strengths. Ismailcan “XANTARES” Dörtkardeş led the way with a 26-12 K-D ratio on the way to a 16-10 win.

One more winner-takes-all map would be needed to separate the two teams. Mirage would be the tiebreaker. The first half didn’t bode well for BIG. After winning the pistol round and anti-eco, BIG only managed to find three more points on their entire CT half. OG rifler Mateusz “mantuu” Wilczweski was making tons of space, racking up a 17-8 K-D and 106.2 ADR.

Now down 5-10, BIG needed to pull out a miracle. They started off on the right foot by winning pistol, but once again couldn’t find the early gun rounds. OG ticked up to a 14-8 lead and the result was all but locked in. However, BIG came roaring back with great force. All of the sudden, they were winning round after round, inching closer to the comeback. In the end, two successful 1v2 clutches by Tizian “tiziaN” Feldbusch and XANTARES helped BIG complete the eight-round win streak to claim a 16-14 victory and a spot in Grand Finals.

Their opponents would be Heroic. Group A’s second place team behind BIG themselves had just won their Semifinals match against Complexity in similarly nail-biting fashion. After getting demolished on their own Vertigo pick 16-4, Heroic stole Complexity’s Mirage 16-7 before winning on Overpass in overtime 19-15. BIG and Heroic’s Group Stage match ended in a 2-0 sweep for BIG, so Heroic had to show something new if they wanted a chance.

Surprisingly, it was BIG who made the change. Seeing Heroic’s near loss on Overpass prompted BIG to first pick it in an attempt to counter-strat their opponents. Their plan paid off in spades. Although Heroic were the ones who got off to a hot start, BIG’s T side only ramped up as the first half went on. The 7-8 first half deficit was quickly erased as BIG enacted their CT game plan. After losing the second pistol, BIG won nine of the last 10 rounds in the half to shut Heroic down. TiziaN and XANTARES were once again driving forces behind their team’s success, earning 25 and 26 kills respectively.

Heroic now needed to take their own Inferno pick if they wanted a chance to win the series. That premise seemed plausible after a decent offensive half. Despite getting aced in the pistol round by the Dual Elites, Heroic picked up a total of eight rounds to earn the lead at the half. However, much like in the previous map, their steam ran out sooner rather than later. The entirety of the BIG roster was on top of their game. Every single player ended the map with a positive K-D ratio as Heroic struggled to keep pace. Eight of the last nine rounds in a row went to BIG, helping them close out the map 16-12 to claim the DreamHack Open Summer title.

ONCE again the BEST team in EU! @BIGCLANgg beat @heroicgg 2-0! 🔥

With this undefeated run, BIG have solidified their rank one status for at least a little while longer. Although the level of competition present at DreamHack Open Summer wasn’t exactly the highest, BIG convincingly beat everyone in front of them. Their next test begins in just two days with ESL One Cologne. This massive event will truly be BIG’s chance to keep the spotlight on them.