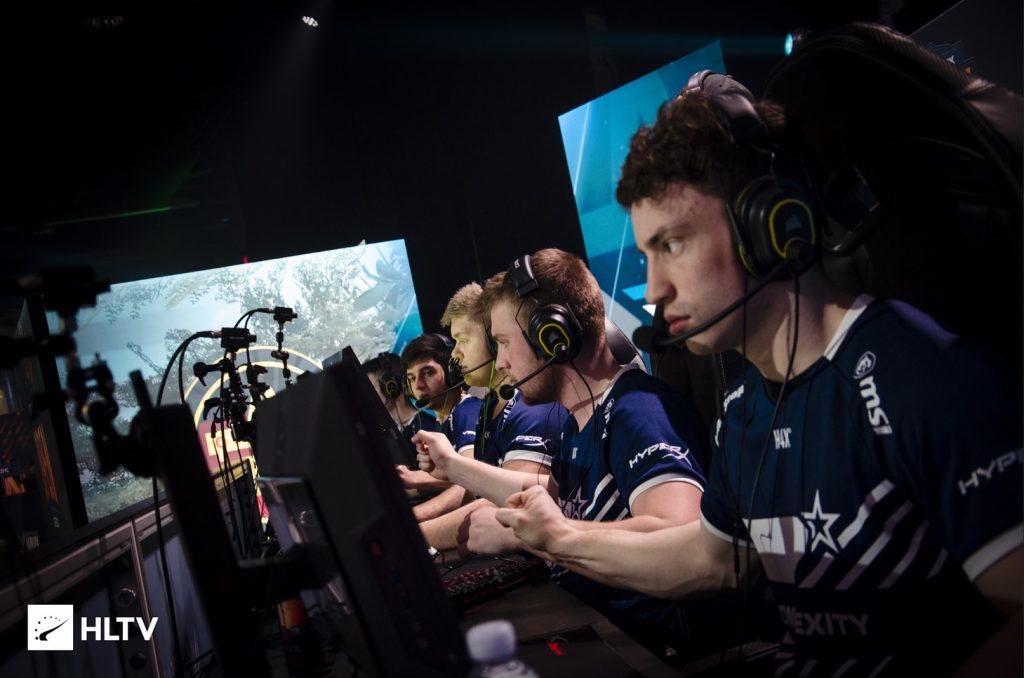 Complexity and BIG have gone undefeated in their groups and will have first seeds for playoffs. (Photo courtesy HLTV)

Counter-Strike is back in action with DreamHack Open Summer. On the European side, BIG and Complexity Gaming have come out swinging to earn first seeds in their respective groups. Joining them in the playoffs will be Heroic and OG who won the last chance decider matches.

Group A played host to many strong teams. Alongside the top ranked BIG, Heroic and MAD Lions were slated to compete for a playoff spot. Surprisingly, it was Endpoint who gave BIG the most resistance. The first match of the tournament saw Endpoint pick Vertigo. They got off to a hot 5-0 start on CT side, but then allowed BIG run it back to a 9-6 lead at the half. However, Endpoint’s attack was even more fearsome. Robin “robin” Sjögren put up a 18-7 K-D ratio with 124.9 ADR on T side to earn a 16-13 upset win on their own map.

Endpoint even had a chance to close out the series in two maps. BIG’s Dust2 started out very similarly. Endpoint were down 5-10 after the first half. Once again, Endpoint were able to claw back into the game on the offensive. Unfortunately for them, BIG maintained composed enough to hit match point first thanks to Florian “syrsoN” Rische’s AWP. Still, the 15-12 score turned into 15 apiece, forcing an overtime. In the end, it was BIG who came out on top after two OTs. Syrson’s 1.56 HLTV rating was the only one on his team above 1.00.

Now on Mirage, the entirety of BIG showed up for the first time all series. BIG started on the CT side and wiped the floor with their opponents. Endpoint only found a single round all half, giving BIG an insurmountable 14-1 lead. The map soon concluded with BIG taking the 16-3 win and the series. Ismailcan “XANTARES” Dörtkardeş’s performance earned him a 30-10 K-D, 172.7 ADR, a whopping 2.51 HLTV rating, and match MVP.

The Winners’ Match pitted BIG against Heroic. Heroic were coming off of a 2-0 sweep against MAD Lions, a much more difficult team on paper than Endpoint. There were concerns over BIG’s form for this match, but they would soon be dispelled. Heroic chose Inferno for their map. It was also BIG’s lowest win rate map in the past six months.

BIG took a narrow 8-7 lead on CT side in the first half. Although they won the second pistol round, Heroic were prepared on defense. The Danish squad took five rounds in a row after full buying, taking a 12-10 lead. They tried to continue their aggression, but then Nils “k1to” Gruhne shut it down and opened up the B site by himself.

That momentum swing allowed BIG to win six of the last eight rounds and take the 16-14 win.

BIG’s famed Dust2 was up next. Their CT side was oppressive as usual, holding Heroic to just three rounds. Heroic got a streak of their own going in the second half, but their flame was snuffed out quickly. BIG completed the sweep with a 16-10, securing their spot at the top of Group A. Still, Heroic would earn their ticket to playoffs after a quick match against Endpoint in the Decider match.

Complexity Come out On Top

Group B was nothing to scoff at either. Complexity and OG from Europe were joined by forZe and Team Spirit from the CIS. The teams were all ranked between 9th and 28th coming into DreamHack Summer, so there was potential for anyone to beat anyone.

Complexity’s journey began against forZe. The first map was Overpass. Although forZe earned an 8-7 lead from T side of their map pick, it wouldn’t last for long. Complexity broke the forZe economy early with a second-round force buy. The map was very one sided from that point on. Complexity won eight of the next 10 rounds on their way to a comfortable 16-11 win.

It was expected that Complexity would be able to close out the series on their Mirage pick. However, forZe were able to fight back with vigor. They were down 2-7 after a rough start, but then won six in a row to close out the first half. Now on T side, forZe got going early. The score hit 14-11 before Complexity finally found their footing. Despite overtime coming in, Bogdan “xsepower” Chernikov’s AWP presence was the difference maker that allowed forZe to secure a 19-17 win.

Nuke would be the tiebreaker map. Complexity started off on CT side and managed a respectable nine rounds. After the swap, Complexity put the series on ice. They won the second-round force buy despite losing pistol, then only lost one more round the entire game. Owen “oBo” Schlatter and Valentin “poizon” Vasilev led the way to a decisive 16-8 victory and a spot in the Winners’ Match.

Complexity and OG would go head to head for first seed. Nuke was OG’s pick, so they had to start on the T side. At first, the map looked completely one sided. Complexity rolled through the first 11 rounds in a row. OG did manage to win their last four attacking rounds, but still had a long way to go. They started off well on CT side by winning eight of the first nine. The rounds score was tied at 12 apiece when Complexity found some success. After a full 30 rounds, poizon put the nail in the coffin with a 1v3 AWP clutch.

Mirage was Complexity’s map pick. Their T side earned a quick 6-1 lead, but fell off in effectiveness towards the end of the half. OG won the last eight rounds in a row to bring the score to 9-6. Still, Complexity regained the reins with yet another second-round force buy after losing the pistol. OG had trouble finding any openings and eventually sputtered out of the map. The 16-13 result put Complexity through to the playoffs. Much like in Group A’s Decider Match, OG would take a clean 2-0 sweep over forZe to secure a playoff berth for themselves.

DreamHack Open Summer Playoffs will begin on August 15th with BIG vs OG and Complexity vs Heroic. The four team playoff bracket could go in anyone’s favor as Counter-Strike’s first tournament back continues.