Beyond the Summit to Host BEYOND EPIC 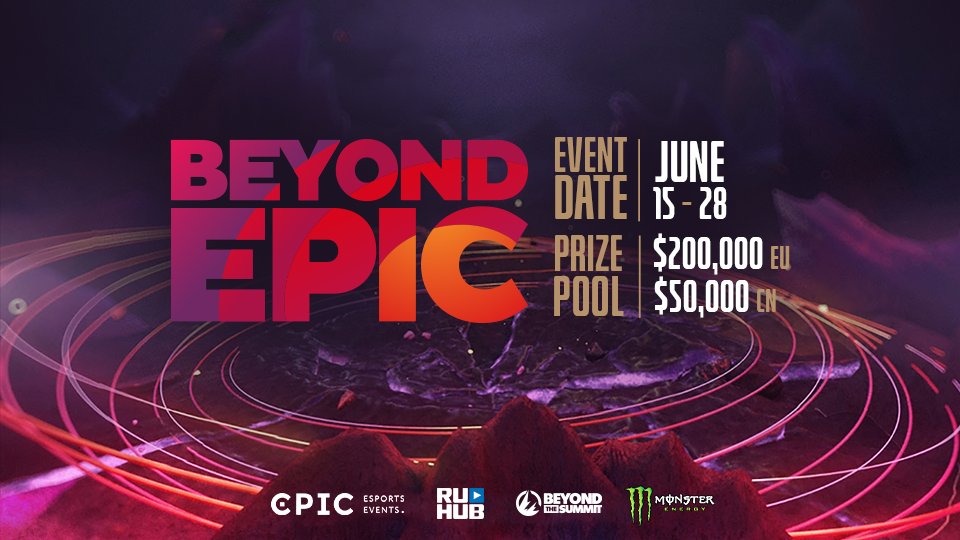 There's no rest for the wicked, as China, Europe, and the CIS's top teams will face off in mid-June at BEYOND EPIC. (Photo courtesy Beyond the Summit)

Beyond the Summit, in association with Epic Esports Events and Dota2RuHub, revealed BEYOND EPIC, an online tournament series pitting the best teams in Europe, CIS, and China against each other. The news broke early Thursday Morning in posts on social media, and with the launch of a dedicated page on EPICENTER’s website.

We’re so excited to announce BEYOND EPIC, an online Dota event in partnership with @epicentergg and @dota2ruhub! 🎉

For a list of participants and more information: https://t.co/vfHkYVAqMH pic.twitter.com/bP5zJOUeYp

The event looks to replace Epic Esports Events now canceled EPICENTER Major 2020, which was initially scheduled to run in early May. However, the Dota Pro Circuit tournament was canceled due to the threat posed by the ongoing coronavirus pandemic.

The event will feature two divisions: Europe/CIS and China, with the best teams and total prize pool of $250 000 😎

BEYOND EPIC will bring together twelve teams from the CIS & Europe and eight from China in two competition divisions. CIS & Europe will compete for a $200,000 prize pool, while China will battle it out for $50,000. The event is set to run between June 15th to June 28th and has already secured some top Dota 2 talent.

For the Europe/CIS division, Virtus.pro, Natus Vincere, OG, Nigma, Team Liquid, Alliance, and FlyToMoon will take the stage along with three unannounced teams, and two open qualifiers. If this list of organizations seems familiar, it’s probably because all apart from VP are participating in the currently ongoing ESL One Birmingham event. After all, there are only so many combinations of top CIS and European teams a tournament can bring together. Nevertheless, it’s another fantastic opportunity to see these stacks in action (and to see whether Team Secret can repair the blemish to their undefeated streak).

In the China division, the teams are similarly prestigious – PSG.LGD, Vici Gaming, Royal Never Give Up, CDEC Gaming, Invictus Gaming, Team Aster, and Sparking Arrow Gaming will battle it out for their share of the prize. A single qualifier tournament will be held for the remaining slot.

Tune in to all the BEYOND EPIC action on Beyond the Summit’s official twitch channels, and in Russian on Dota 2 RuHub’s channels.