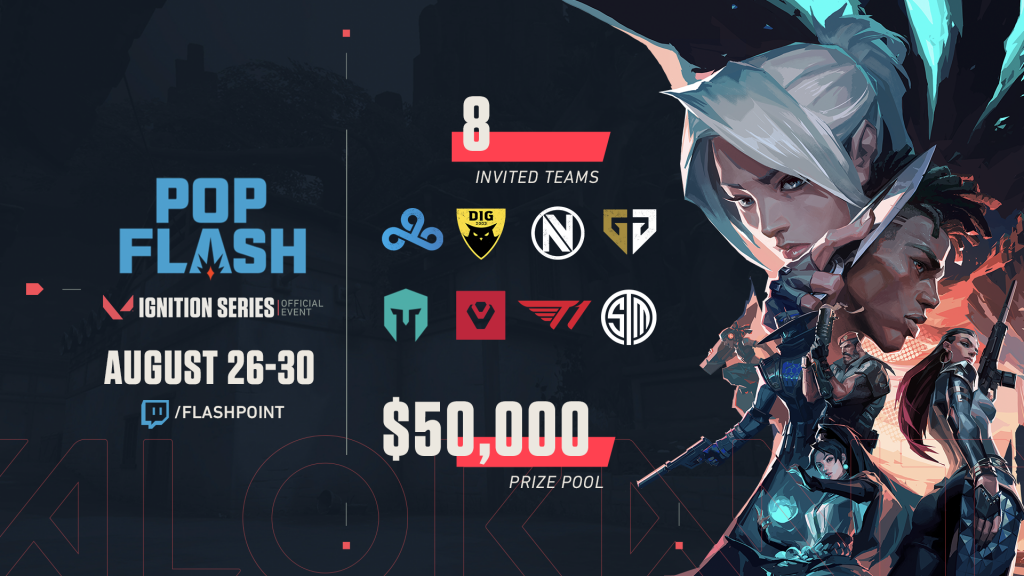 Some of the best teams in the world will compete in the final tournament of the VALORANT Ignition Series. (Photo courtesy B Site)

B Site, the parent company of the CS:GO tournament organizer FLASHPOINT, will host the final VALORANT Ignition Series tournament, the organization announced on Wednesday. This marks the organization’s first step into the VALORANT competitive scene.

B Site is thrilled to announce our entrance into VALORANT with Pop Flash! We are proud to host the final NA Ignition Series Event of 2020

The tournament is called “Pop Flash” and will feature some of the biggest teams in VALORANT. Cloud9, Dignitas, Gen.G, Immortals, and Team Envy are all founding partners of B site and will compete in the tournament. TeamSoloMid, Sentinels, and T1 will also be competing.

Teams will be separated into two groups of four and compete in three days of group stage play. The top two teams in both groups will move on to the playoffs. The playoffs will consist of a double-elimination bracket between the final teams.

The tournament will feature a diverse roster of casters with backgrounds in other esports. Christine “Potter” Chi, Alex “Mauisnake” Ellenberg, and Daniel “ddk” Kapadia are well equipped with extensive backgrounds in CS: GO. Erik “DoA” Lonnquist, a former Overwatch League caster, will also serve as a caster for the tournament. Additional talent will be announced soon.

Vice President of Brand at B Site Christopher “MonteCristo” Mykles expressed his excitement about joining the VALORANT esports scene in its early stages:

“We’re excited to join the VALORANT Ignition Series with Pop Flash. B Site is honored that we can help to lay the foundation for a brand new global esport in a way that sets a standard for sustainability and future success,” Said MonteCristo. “Pro team organizations are just beginning to find their footing in this new arena, and events like this will be a crucial stepping stone for player recruiting and team development.

The final tournament of the VALORANT Ignition Series features some of the best talent in the world. TSM recently beat the Sentinels in the finals at the FaZe Clan Invitational and is considered the best team in North America. The other teams also have talented lineups, however, so every match will be exciting and intense.

VALORANT fans can watch the tournament live on the FLASHPOINT Twitch channel on August 26th.