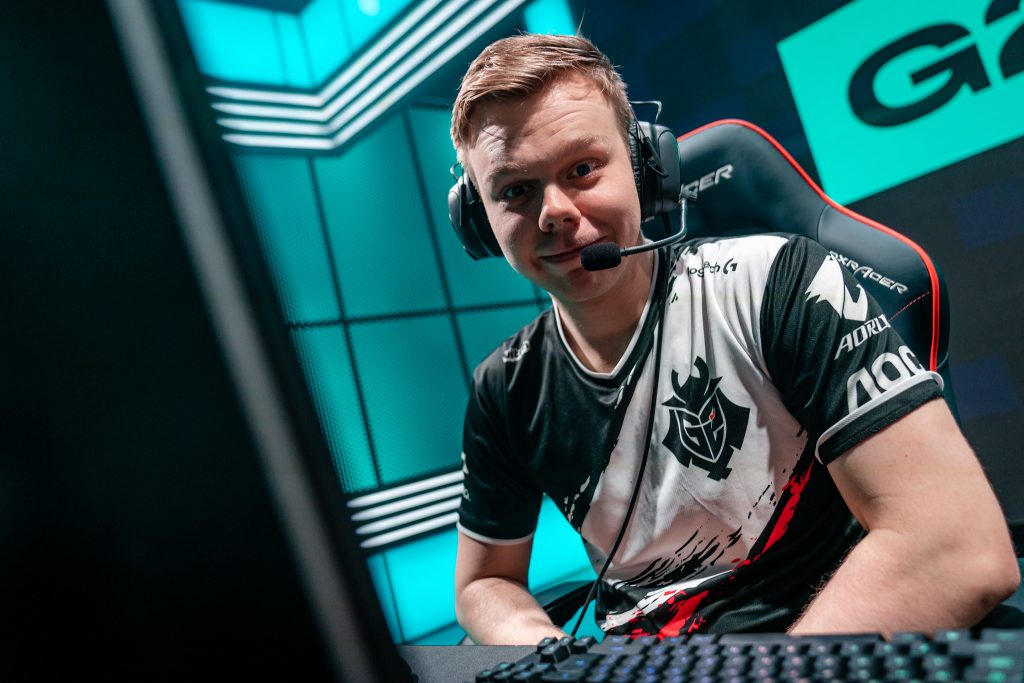 With a LEC Spring Split win, an MSI trophy and now a Rift Rivals victory under their belts; all eyes are on G2 Esports to see how far this team can go. After four weeks of play in the LEC Summer Split, G2 currently sits at joint first place (7W-1L) allowing narratives of their future dominance to form.

On the back of a 2-0 weekend, Martin “Wunder” Hansen sat down with Hotspawn to discuss patch 9.13, alternative international tournaments and hopes of seeing the smite top lane meta return.

You decided to play Viktor, a non-traditional pick due to his AP heavy build and squishy nature, in your game against Schalke. How do you adapt your playstyle when playing this type of champion in the top lane?

I think when you play Viktor, of course, it’s a ranged champ so it’s a completely different play style. The champion has some speeds and slows but it doesn’t have any dashes and it’s very squishy, so you have to respect more. Although, Viktor still scales well, so I guess when the enemy is focusing top my team can make plays on the other side of the map.

Of course, it depends on what champion you’re playing against, in this scenario, it was Neeko who is pretty good at setting up ganks. I had to then play more around my jungler and not do as many plays on my own unless I had the full vision of everything on the map. When you play Viktor you have to keep more things into account. But when you are playing a tank you can just trade a little bit and then walk back and it will just be fine.

: I Have Learned A Lot More Than Past Teams

We are now on patch 9.13 which includes reworked Mordekaiser and new champion Qiyana. How have G2 been preparing for the changes?

We have practiced a lot. Pretty much every new champion that comes out, everyone in G2 plays. So we have been playing Mordekaiser, but unfortunately, it has been banned. Also, Qiyana has been banned in both games this week, so we didn’t get an opportunity to show it off. Currently, I don’t think it’s the best champion in the game, it’s certainly not a high priority but it’s for sure pretty strong. Some teams are playing it to mixed success, I guess.

Are there any particular champions within this new patch, especially for top lane, that you would like to pick up?

I think there is currently a big variety of things you can play. For example, I saw the Vayne pick into Mordekaiser from Alphari yesterday. I’ve played Vayne in the past and I think my Vayne was quite good. Despite when I had that game against TheShy’s Akali at MSI where it was a bit questionable. But in general I like playing Vayne, so if there is an opportunity where she is a good pick into anything, then I would like to play her.

Did you get a chance to watch any of Rift Rivals 2019 LCK-LPL-LMS-VCS? Are there any teams that caught your eye and you would like to play against if you make Worlds this year?

Yes, I watched some of the games from Rift Rivals, however, I was jet-lagged from coming back from our Rift Rivals. I only managed to catch a few because my sleep schedule was like a mess at that time. Among the teams, we have scrimmed Damwon Gaming in the past and they look pretty strong right now. The same with Kingzone. I think they also have some good players on both teams.

Multiple players that attended Rift Rivals have spoken out about the tournament not being beneficial. What are your thoughts on this and potential alternative tournaments?

I think the main issue with having a tournament like Rift Rivals is that our year is already so long. I think if they made either of the splits shorter then the tournament could work. Even just having to break your daily rhythm by traveling to America is hard. I like playing tournaments and against other regions, but I just don’t think this is the right way to do it.

I think they should maybe have these kinds of tournaments for teams that don’t have as long of a year, like the first, second and third place teams have. For example, they could have fourth, fifth and sixth competing. The teams that go to playoffs but don’t make it either to the main stage, finals or current international tournaments. I guess they could do something like this but I’m not sure.

So a little bit of a throwback question. Is there a top lane meta that you have seen in the past that you would like to see come back?

I actually quite liked the smite top laners. I liked playing Hecarim top with smite and also Shyvana. All these champions were really fun to play. Even Fizz top with smite was a thing. Then even though it was kind of broken, I guess it was like really fun to play. So I really like those champs but of course, I liked the carry meta too. I would like to have at least one smite top laner that I can play in the future.