Mikyx: I’m not particularly worried about any team 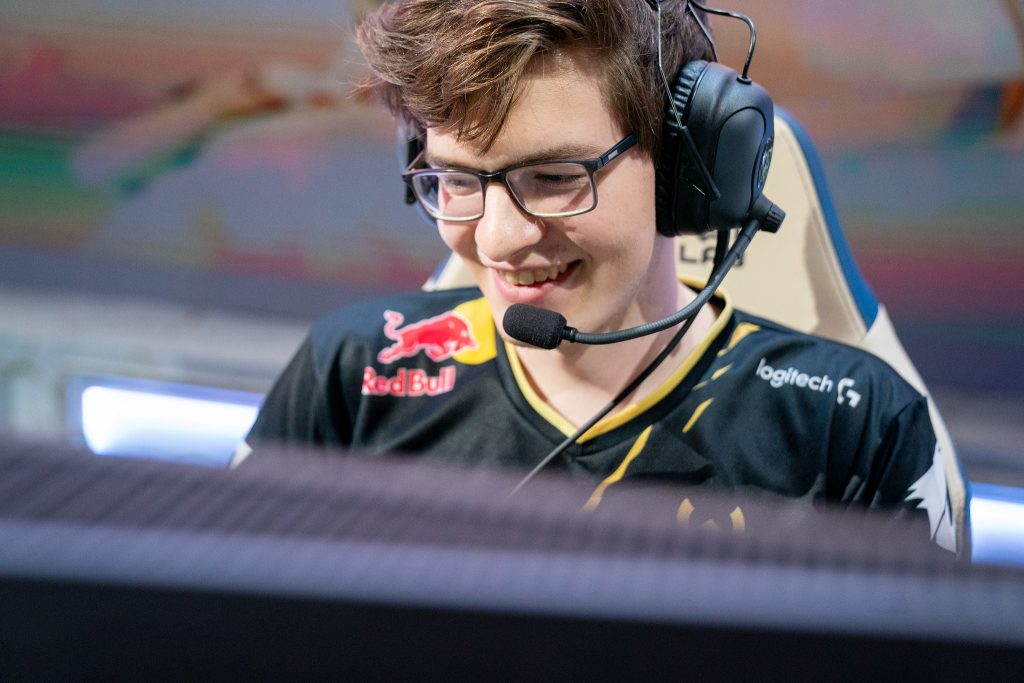 G2 Esports made their debut at the 2019 World Championship on day two of the Group Stage with a statement win against Griffin. In their first match, they demolished South Korea’s second seed team with an uncharacteristically traditional draft and proclaimed themselves as the favorites to win it all.

After the match, Nick Ray of Hotspawn sat down with G2 support player Mihael “Mikyx” Mehle to discuss the team’s “tame” draft, as well as his impressions of the other teams in the tournament and the current meta.

Nick: First off, after that game, I saw on Twitter and on the broadcast you do a little thing with your wrist on the camera. So is your wrist okay or was that just a joke?

Mikyx: Oh yeah, it was just a loke [laughs]. My wrist has been fine since MSI. During the whole summer, I didn’t really have any problems. After I saw Caps was doing his thing where he did this with the face and then Perkz was doing his “watch me” and then it was my turn to do something, and then I was waving and I was like “Ooh, I can do this!” you know, with my wrist. It was just kinda improvisation.

I guess since you guys played standard, you had to throw that in to make things interesting.

So on that note, have you been scrimming with Hampus “Promisq” Abrahamsson? Or is he just along for the ride this time?

No, this time he’s here to chill just in case I have an injury. But yeah, during the whole Summer Split I was playing all the scrims. I didn’t really have any problems.

You started out with Leona this game against Griffin, and obviously you guys were playing standard. Was that the champ you expected to play going in?

I mean we kinda expected them to play Nautilus. They played it a lot in solo queue and also in the LCK as well. A lot of teams play Nautilus, so I had three or four options for counter picks, and Leona is good to just be a tank and some frontline, and we just farm in lane a bit cuz we knew they were going to snowball top lane with Renekton and Taliyah. So yeah, bot lane was just a farm-fest.

I felt like they could do more after our jungler was showing top. They could’ve hooked in cuz I felt like they would win the trade if Nautilus just hooks me once. But they were kinda AFK, and we were AFK, and then we were just farming.

Can't believe my first game was on Leona… #Worlds2019

What do you think are the best supports in the meta right now, then?

I feel like Nautilus is one of the better ones. I like Shen as well. Rakan. Leona’s pretty good. I like Blitzcrank sometimes situationally. Thresh. Morgana as well. That’s pretty much it.

I saw when you were duoing with Zachary “Sneaky” Scuderi, though, on stream you were trying a couple “different” picks. Do you think we might get to see any of those sometime in the tournament?

We already saw Fiddlesticks. You saw the Nocturne. But maybe in the future. When I was playing with Sneaky, I was mostly just kinda trolling [laughs]. I played Poppy, so that could happen. What else did I play? Swain support I’ve played in solo queue. I mean it’s pretty fun, I’m not sure if it’s that good, but it’s pretty fun to play. That’s pretty much it.

It’s funny because I think for a lot of people, maybe back in Spring, Griffin vs. G2 would probably have been a marquis matchup. But coming into this tournament, people were kind of on the fence about how strong you guys would be coming out of the gate. Aside from a little slip-up, you guys actually crushed them pretty much. What do you have to say to all of the people who were doubting you guys before you’d even played?

I mean, we also didn’t know what to expect when we were just coming into the first game. It kinda felt like MSI, but that’s why I felt like we also tried harder. It felt like we weren’t taking as much random fights; we always thought things through.

In Spring when people were saying Griffin vs. G2 was gonna be a hype matchup, I felt the same because they were playing so many weird picks especially in the bot lane. [Son “Lehends” Si-woo] was playing Ornn and Elise support, stuff like that. And I also felt like we played a lot of random shit, so I felt like it would be really fun if we just played each other and just played random champions. But it was pretty standard, so hopefully, the second time around we play more random champs.

Is there a team in your group aside from Griffin that you guys are particularly worried about, or do you think it’ll be a cakewalk?

I’m not particularly worried about any team. I guess Cloud9 could be good, but from seeing the other teams I wouldn’t be too worried [laughs]. I’m not sure how they’re doing right now. They’re playing right now so maybe they’re smurfing. I guess we’ll see tomorrow.

What do you think about how the EU teams have been doing so far?

I feel like Fnatic has been doing pretty well. I mean they’re playing a bit worse than expected with early game, but I think they’re still playing pretty smart around the map so they have a good shot at making it out of groups. With Splyce, they were playing fine yesterday. They were playing fine, but the enemy team was just worse. They weren’t doing anything special. So I mean maybe they can get second, but it depends on how good FunPlus Phoenix and J Team are. They’re a little bit coinflip.

Give me a prediction right now. What score do you think you guys will end with?

Who’s gonna be below you?

Okay, do you have anything to say for your fans?

Thanks for watching. Stay tuned for hopefully more fun games than this one.

Thank you to Mikyx for taking the time to chat with us!

You can watch all of the Group Stage action on Twitch, and check-in with Hotspawn for daily recaps through the League of Legends 2019 World Championships!