What in The World to Do With Worlds 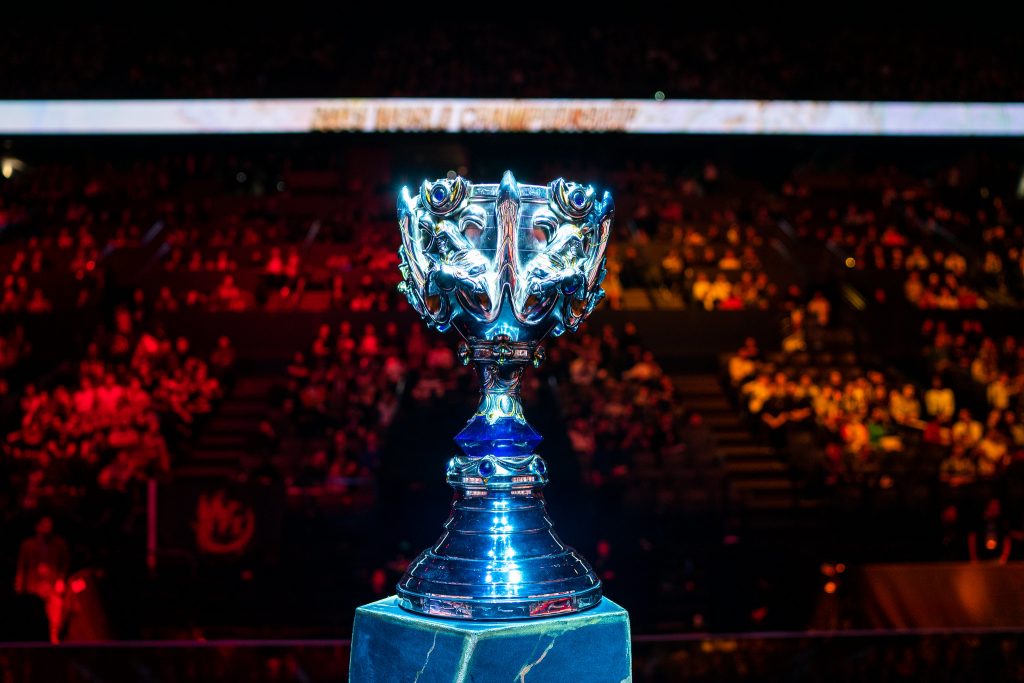 Will there be a trophy to lift this year? (Photo courtesy Riot Games)

COVID-19 has the world in its grip for almost half a year already. The ramifications of the pandemic haven’t gone unnoticed in any industry, as esports continues to be affected as well with events being postponed or cancelled altogether. While through most governments’ strict measures the spread of the deadly virus has been slowed down drastically, the future remains incredibly uncertain regarding events as a whole, let alone events with large crowds in attendance.

When the Mid-Season Invitational was canceled by Riot Games, they hosted the Mid-Season Cup, an event between LCK and LPL teams that could be played online. But that is no option for the truly global, most prestigious League of Legends event of the year: the World Championship.

Worlds recently had another shadow of doubt cast over it. China, the host country, announced that it had decided to cancel all international sporting events until 2021 to prevent the potential import of new COVID-19 cases. Thankfully for esports, China acknowledges professional gaming as an occupation, but not as a sport.  Still, while the ruling theoretically should not affect League of Legends competition at this moment, Riot Games need to pivot now for their crown event of the year given the organizational load it brings with it. So, what are the options for the League of Legends World Championship this year?

The NBA approach: bubble up

According to ESPN, Riot Games is currently considering using a bubble system for Worlds. Currently, this system is being used by the United States’ National Basketball Association (NBA) to allow the competition to continue. The idea is fairly simple: bring all competitors, and other people necessary to run the event, to a dedicated area, and quarantine them there after all attendees have tested negative for the coronavirus. Training, resting, rehearsing, everything is done from within the bubble. Nobody goes in, nobody goes out. Through designated and heavily monitored entrance points, essential services such as food delivery and other household necessities find their way to the people living inside.

This option would require the least logistical adjustments from Riot Games but it wouldn’t grant the players, casters, and crew running the event a lot of freedom. It would also guarantee that no fans or press could attend the event in-person, obviously greatly detracting from the feeling of grandeur a world championship event is supposed to bring with it. However, this is a small price to pay when weighing the upsides. Bringing all the players to one location and being able to play the matches in a LAN setting guarantees that all teams will be playing on the same latency, creating a level playing field for all competitors.

Directly linked to that level playing field, but a far higher priority, is that the bubble system provides players with an incredibly safe environment to operate from. With everyone inside the bubble in a healthy state, and the access points monitored, the risk of anyone contracting the virus is extremely low. It would be a different experience for sure, but the League of Legends audience has already been trained for audience-less competition this year. Press can conduct interviews online too; the bubble seems like the most ideal solution for Worlds to continue. 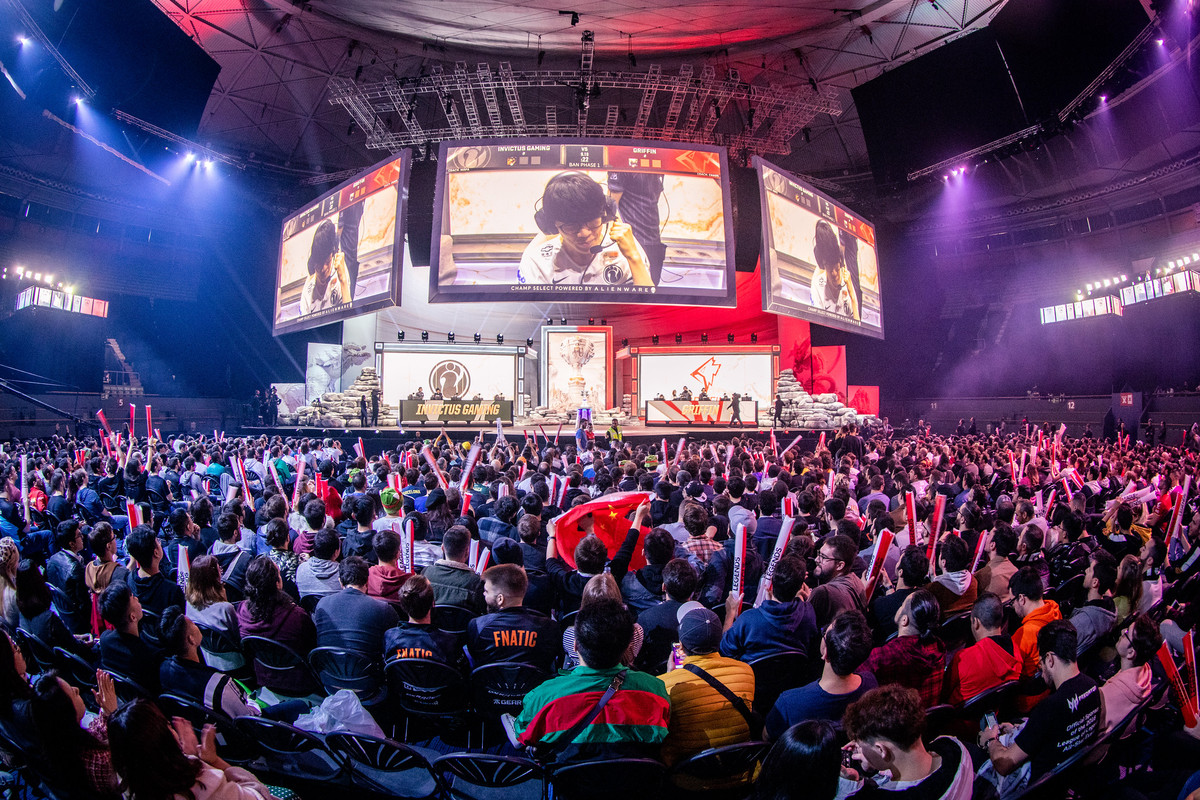 One thing seems sure: such large won’t be seen this year at Worlds. Photo courtesy of Riot Games.

Back to Europe, or forward to Korea

Tencent, the Chinese conglomerate which owns Riot Games, has strong ties with the Chinese government. However, nothing guarantees that the country agrees to host Worlds this year. So what if they decline and Riot Games is forced to hold the event somewhere else? Two additional options present themselves: Europe and South Korea.

In most European countries, the amount of new COVID-19 has seen a steady decline. Slowly but surely, ‘normal life’ is being picked up again as facilities are opening up. Though, at the moment the consensus is still that people not living under the same roof should keep a safe distance from each other, public entertainment sources such as zoos, cinemas, and theme parks are opening with restrictions in place. In The Netherlands, for example, events with up to 100 people present (excluding personnel) have been allowed since the first of July, provided the organizer of the event puts measures in place to keep attendees from breaking the safety distance.

South Korea, a country far advanced in its handling of the coronavirus pandemic, provides another option. A major League of Legends region just by its own, South Korea is likely to be in line to host one of the upcoming LoL World Championships after China (this year) and North America (2021). South Korea provides a legendary scene with its dominant legacy in League of Legends esports, and has incredible facilities to make esports event come to life even without a crowd present.

However, and this will start to sound repetitive, but it’s the world we live in, there are so many more uncertainties that these options bring along with them, even if you would opt for a bubble system in one of these regions. Both Europe and South Korea currently have travel restrictions that look to be heading in the right direction. Most visitors can now enter after spending some time in quarantine, with looser rules on the horizon. Germany, Sweden, and The Netherlands are all examples of countries whose current trajectory of international travel looks promising. But the rules around event permits, tourism, and everything else that comes with hosting an international event are subject to change with any influx of corona cases as governments try to protect their citizens.

There is another major factor that could severely impact how, if at all, the League of Legends World Championship will pan out this year. Brazil, home of the Campeonato Brasileiro de League of Legends (CBLoL), one of the minor regions that have a seed at the Play-In Stage, is far from ‘on the decline’ with its COVID-19 cases. Tens of thousands of people are being diagnosed with the virus on a daily basis, and is home to the world’s second-largest outbreak.

The country with the largest outbreak also is deeply connected with competitive League of Legends. In the United States of America, home of the North American League of Legends Championship Series (LCS), the amount of COVID-19 cases is not slowing down at all. Instead, it seems to be accelerating. 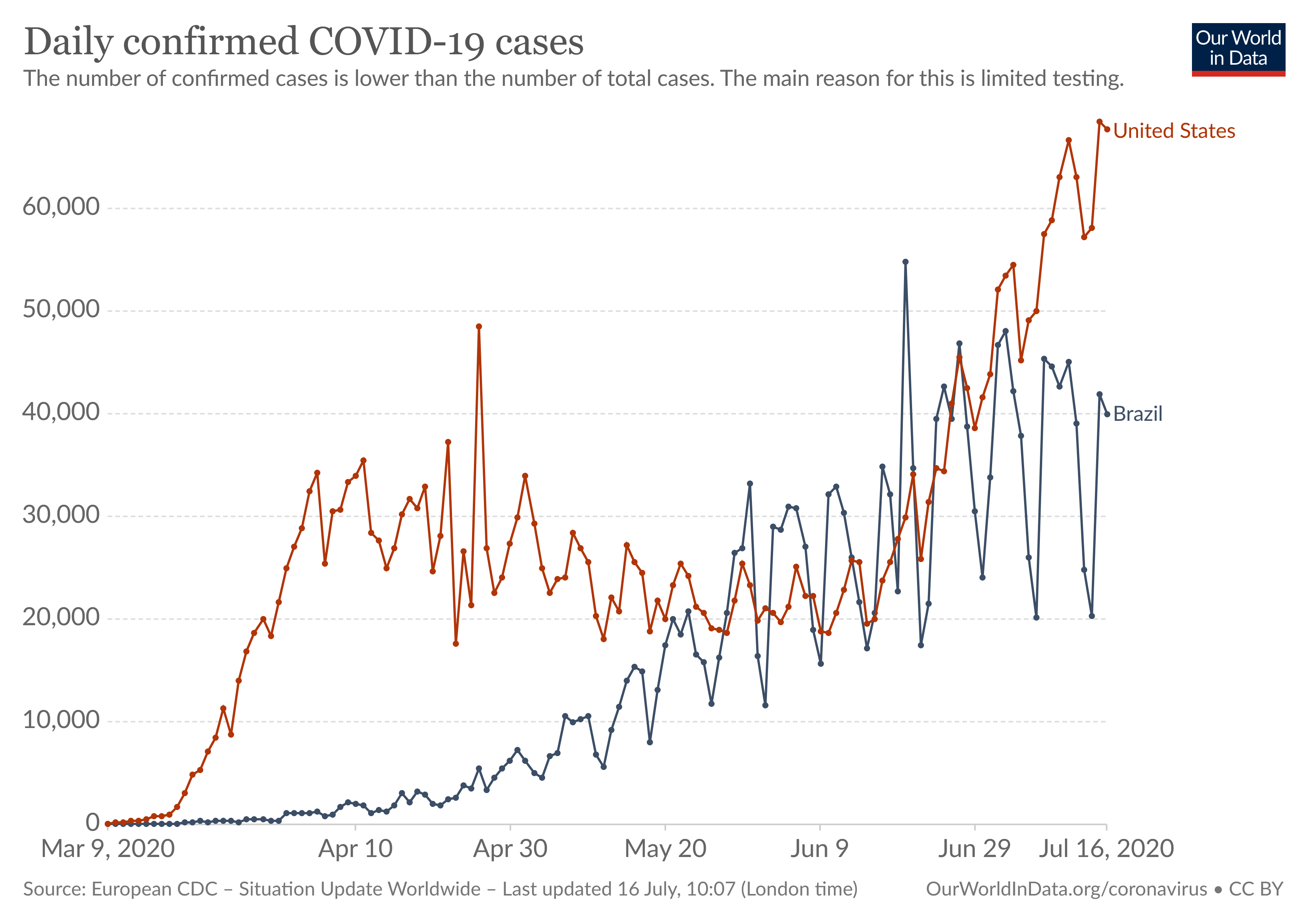 COVID-19 cases in Brazil and the United States continue to spike. Chart courtesy of Our World in Data.

With these numbers, two situations are very realistic. One: the countries themselves will not allow their citizens to travel abroad. Two: if those countries do allow their citizens to travel, there’s a chance that other countries will deny those people entrance if they think it would compromise the health of their own citizens. At this rate, it’s possible that US and Brazilian teams will not be allowed to leave their country at all. Bubble system or not, two regions wouldn’t even make it to the doorstep.

Jokes about the ‘actual chance’ CBLoL and LCS teams would have at a Worlds are easily made. However, if you want an event to truly represent all international facets of competition, they cannot be left out. It’s as simple as that. So where would that place Worlds? Riot Games could opt to now pivot towards hosting the event in a Central American country, where all other teams could play at LAN, and LCS and CBLoL teams play on a ping upward of 100 milliseconds. It is, of course, entirely suboptimal for the competitive integrity of the event. But would it be better than potentially having two regions left out of the World Championship altogether?

Esports event organizers everywhere are subject to many headaches in light of the pandemic, and Riot Games is no different. Local leagues have adapted greatly to the new online era, but the publisher faces a real head scratcher with their marquee international event.

The bubble system seems to be the best bet for Riot Games. Perhaps if teams from regions where COVID-19 is still a crisis increasing in size prove that they have self-quarantined, or if they go to China early to be subject to stricter testing rules, a truly international event will be possible. All that can truly be done is holding our breath, and waiting. Waiting to find out if this year, we’ll find a tenth League of Legends World Champion.