Vizicsacsi: I just want this journey to be as long as we can possibly make it 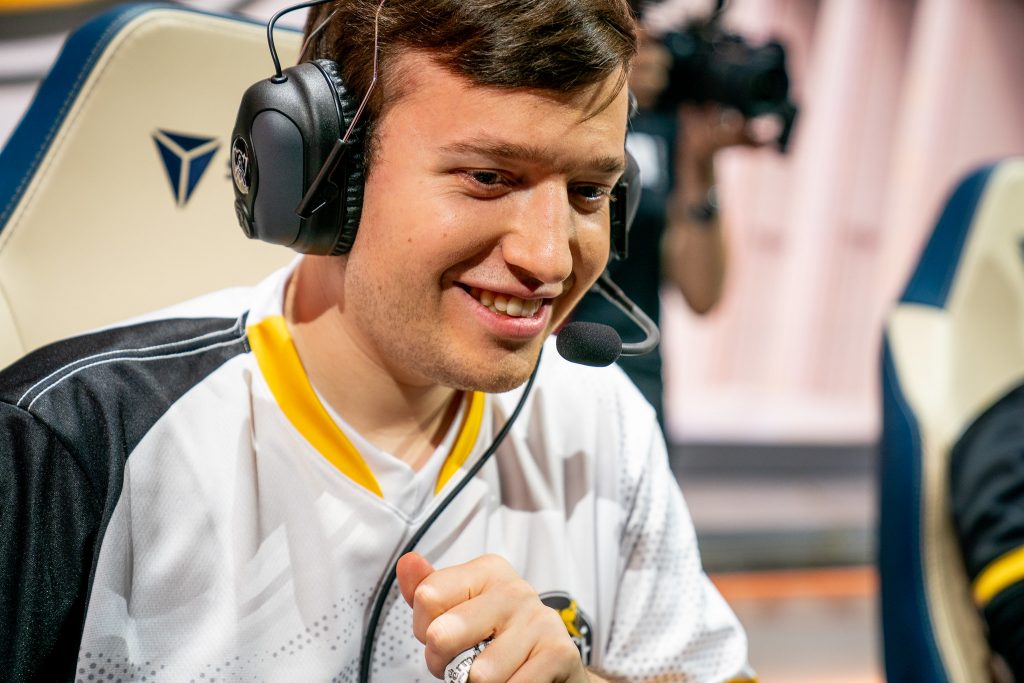 After an impressive showing against GAM Esports on day one of the Main Group Stage, Splyce fell on day three against a shaky-looking FunPlus Phoenix squad. Splyce moves to a 1-1 record after that loss, and look to redeem themselves against J Team on day four to keep their hopes of escaping the group alive.

Nick: So it seemed like you guys were pretty controlled for most of that game and then the turning point around the Baron happened. What do you think went wrong that game?

Vizicsacsi: I think we were just a bit too slow in setting up and were not responding correctly to their pressure. They were applying a lot of pressure even though they were behind. They were just dropping waves in order to pressure us a bit more and they forced us into making decisions and we didn’t make the correct ones. It ended up in a situation where we started the Nashor without any control around it, so they could have like four people coming from different directions and we had no vision on them.  And we fifty-fifty’d the Nashor on top of this and they stole it and they killed us, so it was the biggest disaster it could be.

On that note, you played Gangplank into Renekton matchup and a lot of people were very critical of it saying that you should be able to get by. What are your thoughts on how [Kim] “GimGoon” [Han-saem] played that matchup and the matchup overall?

I think the matchup is overall good for GP and I think normally I would get priority against Renektons, but GimGoon was very smart at level one. He leveled up the W and instantly traded back on me, and I think after that I lost the lane priority. So this was something that I didn’t account for and something that I will look out for in the future. But it was a smart decision from him, and it shows that he’s a top-class player. After that, the laning phases played out evenly so I think it was fine for both of us.

On a light note then, this is your first year at Worlds and a lot of people have been waiting for this moment to see you on stage. How are you feeling about it all?

I’m feeling really good about it actually because this is something I’ve always wanted as well. When I stepped onto the stage on the first day, it was actually really touching. I could feel the hype building up because we are at Worlds. It was much different than the Play-in Stage, and there were a lot of people cheering for us and for the other team as well. Overall, the atmosphere is so much butter. Other than that, I just want this journey to be as long as we can possibly make it.

With that loss, you guys are only 1-1 right now. FPX had a really bad start on day one so it feels like it could be anybody’s group and I think a lot of people are predicting you guys to get out. What do you think?

I think this is actually anyone’s group, as you said. It feels like we are kind of on even level. I think FPX got the better end of us today, but this game should’ve been won by us because we had such a big early game lead. I’m still really frustrated about losing this game because we should’ve done a lot better and closed it out. But other than that, J Team looks around the same level as us too, and I think we need to see a bit more of Gigabyte Marines because they were extremely passive on day one and that’s not what I expected of them. I only heard that this team plays for kills, they are really aggressive and they are always attacking you. So I wanted to see more of that style from them if they want to be a contender for the group as well. Basically anyone can take it at this point.

How do you think the top lane meta has shaped out? Has it lived up to your expectations based off of scrims or are there any champions that you think we can expect to see on stage soon?

Eh… I mean the top lane meta is most of the times revolving around GP right now I feel like and the counters of GP and Renekton as well. Those are the primary picks. Some people are blind picking Vladmir as well like [Jang “Nuguri” Ha-gwon], but other than that its standard picks. It’s really hard to pick anything that’s out of the ordinary because these champions are so solid on their own that they usually crush anything else that is non-meta. There is only a specific set of champions that you can use against them, so I think what we have seen so far at Worlds will probably stay the meta in top lane.

Now speaking of diverging from the meta, you guys did break out the Veigar bot lane, which we’ve been seeing a lot with Glacial Augment. What made you decide to put it on [Kasper “Kobbe” Kobberup] instead of give it to [Marek “Humanoid” Brázda]?

We basically thought that Tristana is good into the Ryze. So we wanted to go with this matchup and we know that most people struggle to play against Veigar because it’s such a powerful pick. When you cage someone, there’s no escape so it’s really good against the likes of Lee Sin. So when we saw their draft, we said Veigar is very free here because it’s gonna provide a lot, and I think he did. Ryze was definitely the issue there. Maybe we should’ve played a bit more around mid lane and helped Tristana snowball, because that’s also a matchup we could have abused a bit more.

You guys play J Team next. What are your anticipations for that match? Are you looking forward to playing against anything that they may have broken out in scrims?

Ah yes, I think J Team looked very powerful in day one and they are playing Gigabyte Marines now so we will see that match and try to analyze it. But I think they are strong contender and I think they are someone that plays heavily to the top side as well from how I’ve seen and they try to snowball there. So I will be a bit in danger,  we will come with something prepared for sure.

Do you have anything to say for your fans that have been supporting you for so long?

I thank everyone eery much for their cheers and their support. Every time we have an achievement of a victory or anything or just getting to Worlds. The amount of supportive messages I received was incredible amount so I’m very appreciative towards that.

Thank you to Vizicsacsi for taking the time to chat with us!

You can watch all of the Group Stage action on Twitch, and check-in with Hotspawn for daily recaps through the League of Legends 2019 World Championships!