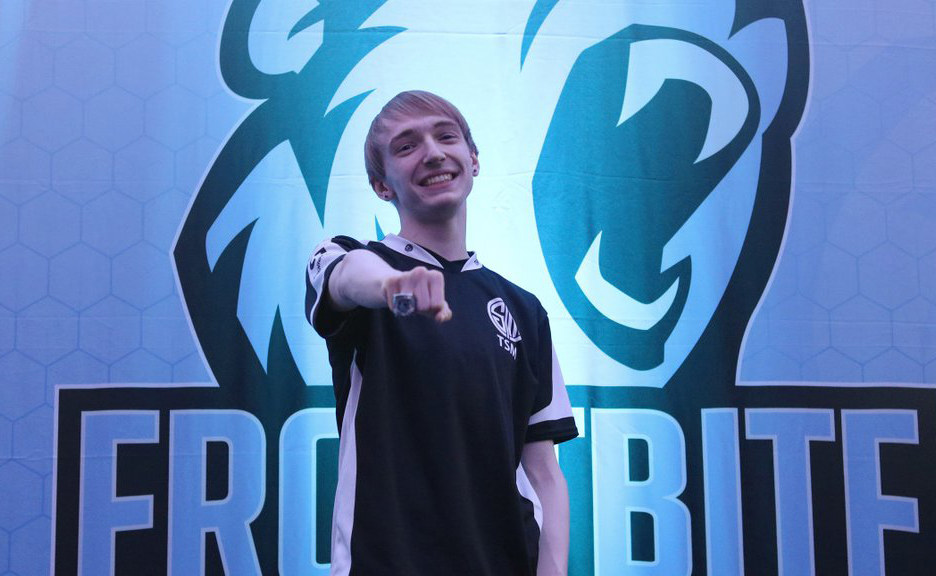 Tweek won both the Super Smash Bros Ultimate 1v1 and 2v2 championship going a combined 21-1 across the entire weekend. (Photo courtesy of Frostbite)

Gavin Dempsey aka Tweek looked unstoppable during Frostbite 2019. The TSM player won both the Super Smash Bros Ultimate 1v1 and 2v2 championship, going a combined 21-1 across the entire weekend – including a perfect 11-0 in singles action.

Tweek was played with his usual panache across the weekend, stringing together incredibly aggressive combos and hounding his opponents well off the stage. Tweek went 11-0 in 1v1 action – dropping just five matches across the entire weekend.

Tweek rode his main pairing of Wolf and Wario throughout most of the tournament but surprised some by breaking out Donkey Kong in the Winners Final against Genesis 6 winner Leonardo “MKLeo” Lopez Perez. Though Tweek barely squeaked past MKLeo in the Winners Final, he stopped being cute in the Grand Finals and swept MKLeo 3-0 while soloing Wario.

Though the action itself was entertaining – aside from the Olimar mirror matchup between Robert “Myran” Herrin and Shuto “Shuton” Moriya – the final results were filled with the names we expect to see. Here are the final standings for the Smash Ultimate 1v1 Tournament at Frostbite 2019:

Though the Ultimate meta still greatly prefers the likes of Wario, Lucina and Wolf, Frostbite saw some under-appreciated characters get the spotlight.

Wishes ended up placing ninth in the tournament while maining Pokémon Trainer. Though Ivysaur is appreciated within the Ultimate community, Charazard is seen as a massive anchor to the potential of Pokémon Trainer. All three Pokémon complement each other well in a standard game, but Pokémon Trainer struggles when they are forced to play just one Pokémon. This tends to happen the deeper into a tournament a Pokemon Trainer main gets, but Wishes is hinting at the untapped potential of this character.

The other interesting pick was Lea on Greninja. Again, many people in the community thought Greninja had untapped potential, but the Pokemon has yet to be adopted in North America. However, Lea brought Greninja over from Japan – where they have adopted him into their meta. The key to Greninja is to play aggressively because the characters offense is absurdly good but there are serious concerns on the defensive side. It is clear though that a true Greninja main like Lea is able to completely suffocate opponents.

What’s Next For Smash Ultimate

The next big Super Smash Ultimate event is the Smash Ultimate Summit. The invitational tournament takes place on Match 7-10 and will be held at the Summit Gaming House.

The field is largely already decided for the Smash Ultimate Summit. And those competitors are:

There is one final spot up for grabs, which will go to the top non-invited player at Ultimate Nimbus (March 3).