The Winners and Losers of EU ESL One Los Angeles 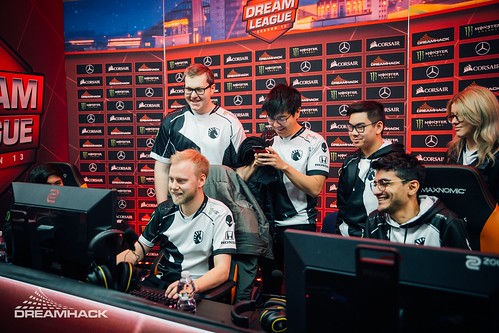 The group stages of ESL One Los Angeles 2020 Online: Europe & CIS are all wrapped up, with the eight playoff teams now locked in, and eight losers sent packing. After a marathon group stage that spanned 13 full days, only the best teams have been left standing.

That's the end of the #ESLOne Los Angeles EU and CIS League Groupstage!

Make sure to tune in tomorrow for the start of the Playoffs 🙏 pic.twitter.com/WVBio82rnI

Virtus.pro, Team Secret, Team Spirit, Team Nigma, OG, Viking.gg, Alliance, and Chicken Fighters have all triumphed at ESL One, securing a place in the playoffs. There are some unexpected names on that list and for good reason. The online format of this event has shaken up both the European and CIS scenes, depositing some surprising names near the top, and sending others crashing to the bottom.

Losing it as Liquid

Top of the list of surprising failures during this online competition is Team Liquid. In what’s clearly the biggest story of this group stage, this storied team’s woeful performance has led fans and analysts alike to question what’s gone wrong. The team went an abysmal 2-5 this event, with an 8-10 match record. The squad, which had been a consistent performer at DPC tournaments this season, recorded multiple losses against top tier and not-so top tier opponents.

There are multiple possible reasons for their under-performance. Firstly, the team was slow on the uptake of new heroes into the meta. They started group stage relying on a Death Prophet pick that was steadily becoming weaker and weaker as the event dragged on. To compound this, while they did adapt their support picks to select Phoenix and grabbed the Centaur Warrunner in several games, the team was still picking heroes who have underperformed on the latest patches. Enigma and Alchemist are not the essential picks and bans that they once were, but again, found their way into Liquid’s lineup several times this tournament.

The one shining beacon in this list of failures has been their victory over Ninjas in Pyjamas on Wednesday, April 15th, the penultimate day of games. Facing an equally struggling NiP squad, Liquid was finally able to put together a performance worthy of their namesake.

Tommy “Taiga” Le’s Weaver was a highlight and a revelation, with the support player injecting some much-needed energy in both of his performances. In the first game, the team struggled to edge out a lead, but eventually the potency of their carries, and the power of their supports won out. Team Liquid was able to rally behind Taiga to score a victory.

We had to chase down the Ninjas but eventually caught them for a 2-0 #LetsGoLiquid pic.twitter.com/YvUnl4IlD6

But even this one bright star wasn’t enough. Liquid has fallen significantly in almost every observer’s estimations, as the squad struggles to even go toe to toe with the likes of Team Unique, Chicken Fighters, and Team Spirit – all tier two teams that wouldn’t have given the stack trouble just a few months ago.

While Liquid struggled to hang on, at the top of the tables were still Virtus.pro and Secret. Neither team has dropped a single game this entire event, a stunning return to form for VP and a continuation of the norm for Secret.

Prior to this event, there were questions about the success of Virtus.pro’s latest experiment. The aggressive acquisition of numerous top talents from CIS had given them, on paper, one of the best rosters in the region. But disappointing performances at DreamLeague Season 13 and WeSave! Charity Play had fans and analysts worried about the team.

Yet with the replacement of Zaur “Cooman” Shakhmurzaev with stand-in Igor “iLTW” Filatov has rejuvenated this roster. Finally, things are starting to click, and it’s no more evident than in their destruction of the likes of OG and Nigma. On Sunday, April 12th, against the reigning TI9 champions, the CIS stalwarts rushed to a quick game one victory on the back of the crucial Spectre pick.

In the next match, OG shot back with a more reserved game, allowing them to last through the raw power of their opponents. However, the polished team fighting of VP proved too much, and after 40 minutes, the super fed Troll Warlord proved too much for OG to stop. It was a landmark win for Virtus.pro, and one that typified the style of play they’ve shown this tournament.

Team Secret, on the other hand, continued the same dominance they’ve shown all season. The team hasn’t missed a beat. Under the careful guiding influence of captain Clement “Puppey” Ivanov, the European powerhouse has steamrolled all comers at ESL One Los Angeles.

He secured a huge lead for his team which resulted in a swift win! 🔥#ESLOne
📺https://t.co/RUTJQihdBh pic.twitter.com/qgu4zX5q4E

Their final match against Alliance was a clinic, showing just what this team was capable of: Two 20-minute demolitions of one of the region’s best squads. Game one was simply a potent show of force from Ludwig “Zai” Wåhlberg, whose Void Spirit should deservedly draw bans. Meanwhile, game two was more of the Lasse Aukusti “MATUMBAMAN” Urpalainen show, with the veteran carry demolishing opponents with Bristleback, a hero he’s played to perfection in both mid and solo lanes.

While not quite reaching the heady heights of VP and Secret, OG also capped off their ESL One group stage run with a series of impressive victories. Despite starting out the final leg with the aforementioned dismantling by Virtus.pro, the team rebounded on the home stretch, with wins over HellRaisers and Gambit.

We can all hear @OG_BDN0tail laughing and clicking like a mad man "Slay them! Slay them! Show them who their Sensei is! 😂"#DreamOG pic.twitter.com/AwfFeyf9qI

The first of those series saw a much more polished and systematic run from OG, as they capitalized on drafts that hid the position of their laners to the last possible moment. This is almost certainly due to the more flexible way the team is using their carries. OG is comfortable enough with the strengths of stand-ins Sébastien “Ceb” Debs, Omar Mohammad “Madara” Dabachach,m and Neta “33” Shapira, and recent addition Syed Sumail “SumaiL” Hassan to move them around between roles.

There are some notable names at the bottom of this bracket. Team Liquid saved themselves from coming in dead last with a final victory over Natus Vincere. However, the team is still eliminated, along with opponents Na’Vi, Team Unique, and Ninjas in Pyjamas. Overall, in Group B, there are some big names who’ve really slipped in this event.

In group A, CIS took a hit, with every team from the region apart from Virtus.pro. Despite mediocre performances for much of the event, Nigma sneaks into the lower bracket, with Viking.gg hot on their tail.

ESL One Los Angeles continues on Friday, April 17th, wrapping up for good with the finals on April 19th. The ESL One Upper and Lower Brackets will both be in action tomorrow, with our first sets of playoff eliminations coming in the morning. On Saturday, the Upper Bracket finals will decide one participant in the finals. You can catch all this action live on ESL’s official Dota 2 Twitch channel.