The Simpsons Tackles Esports in “E My Sports” 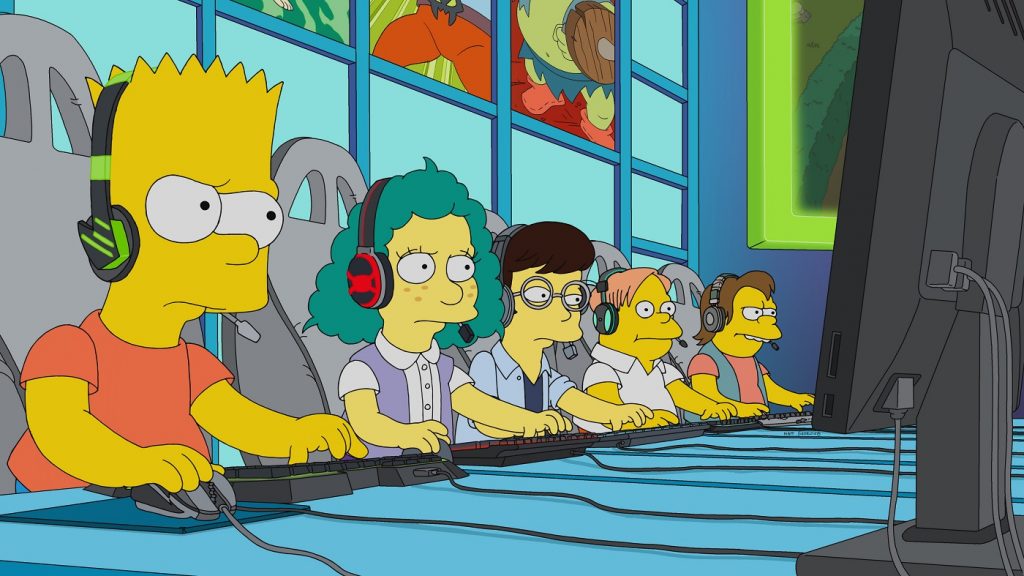 The Simpsons ventures into esports with Bart competing at a LoL-like title.

If you need an indication that esports is becoming mainstream, The Simpsons airing an episode dedicated to the industry is the biggest sign yet! In an episode titled “E My Sport,” Bart and his friends compete in a fictional game called “Conflict of Enemies,” which has huge similarities to the real game, League of Legends. The episode touches on multiple aspects of the esports industry and hits on a lot of esports themes – both positive ones and negative. The question many fans were left with at the end of the episode was: is this episode was a good reflection of the industry we love?

Many shows have attempted to introduce the general population to esports like Elementary‘s episode appropriately named “Rekt in Real Life” or Bull’s episode entitled “The Fall.” And while both shows did a good job conveying the gist of the esports scene, The Simpsons highlights how multi-faceted the industry is.

The Simpsons is no stranger to using tropes to get a message across to its audience, and this episode is no exception. What’s interesting about the show’s use of esports tropes is that most of them are without a positive or negative emphasis. The Simpsons seemed more interested in educating the viewers on the almost $1 billion industry than on conveying whether or not an issue in the scene is a pro or a con. By approaching the episode from an educational standpoint, the show avoids conveying misconceptions about gamers or the gaming industry.

As an example, look at the 19-year-old esports burnout in the episode. “The Detonator” is an esports gaming tutor whose odd behavior is slightly exaggerated, but his accurate esports slang and characterization represent the pro-player-turned-coach from our world. The Detonator was hired to train Bart’s team due to his knowledge and understanding of “Conflict of Enemies.” In one moment, the Detonator decides that his career is over after all, and he gives up on training Bart’s team. Of his decision to retire, Detonator says, “…well I made it longer than most in this crazy biz”.

While 19 is a little young by our standards, there is a commonly held belief in esports that players age out quickly and their careers are short-lived. While this isn’t 100% true, the fact that at 19 a player like the Detonator can ‘retire’ is plausible. Take Sumail “SumaiL” Hassan from Dota 2 as an example. He won The International 2015 at the extremely young age of 16. After winning a cool million dollars, SumaiL could’ve retired at 19.

Bart’s dedication to esports may resonate with fans, if not with Homer.

Another theme that is present in “E My Sport” is the language or slang used by the gamers in the episode. It’s one thing when pop culture attempts to use our slang without understanding it, but The Simpsons uses gaming slang almost perfectly! This is probably due to research and help from some Riot’s esports department and it’s appreciated. While certain characters need clarification about what the slang means, the overall feel of the episode leaves fans of any esport satisfied.

The only discouraging note to make about the use of slang in the episode is how some critics have discussed it. One writer from  Den of Geeks commented that he hopes that at least some of the slang was made up. It’s unnecessary to comment in such a negative way about something so core to our way of life, and makes these comments especially relevant to the next trope I want to discuss from the episode.

One of the biggest struggles that our industry faces is how we explain to outsiders what we do or even how the competitive scene works. The Simpsons is not shy about using their older characters to really drive home misconceptions about the gaming world. When Principal Skinner goes to award the Evergreen Terrors their prize, he starts stumbling with his words, “The Evergreen Terrors have won ah… this thing… I don’t understand at all but which gave the school new basketball nets.” It really highlights how disconnected the general population can be from competitive gaming.

To underline the point, the writers also have Homer ask several times the really common questions that competitive players are often met with like, “They pay you in cash?” when he asks Bart about the upcoming tournament or “A thousand dollars to play video games?”. The Simpsons doesn’t make Skinner or Homer out to be the bad guy by asking but rather highlights the common misconceptions about the industry with relative tact.

There’s one particular trope in the episode that was skimmed over if you weren’t aware of the inherent problem that exists in the competitive gaming scene. Sophie, the daughter of Krusty the Clown, makes a declaration during the episode that playing in the tournament would make her the most famous girl gamer, win or lose. It might be because Riot has had issues with the treatment of women in their workplace or that it’s a sensitive topic in general, but I expected some sort of political stance or opinion.

The show is known for having witty remarks and bold political statements and with an issue like female gamers, I expected some sort of show of support or stance of some kind. This is an industry where few female gamers are signed to top tier teams and where sexism can seem to be rampant. Other shows like Law and Order: Special Victims Unit have addressed things like Gamergate in their episode “Intimidation Game” to shed light on the issues female gamers face in the industry. Perhaps it was wishful thinking that The Simpsons would address the issue but alas.

The Simpsons did a good job at bringing esports and gaming culture to a mainstream audience. They brought many tropes from the esports industry to the episode — from the Evergreen Terror’s opponents “Control-6ing” Sophie’s corpse (a crude action done to opponents who’ve lost in games like Fortnite or Counter Strike: Global Offensive) to the burnt-out 19-year-old coach to Homer attempting to make Bart a professional esports player so he can live vicariously through him.

It’s a well-rounded episode that I can honestly say I’d recommend to my friends and family to help them learn more about what the industry I am apart of. For fans of esports, you’ll get a good chuckle from the comparison to League of Legends and when Homer unplugs the power at World’s, you’ll have flashbacks of your parents unplugging the internet during an important ranked match. I applaud the Simpsons for taking the leap and tackling such a big scene like esports but I think that thanks to the help of Riot, they presented our players, industry, and competitive nature well.