The One Man Apocalypse: The Impact of Roadhog at OWL Finals 2020

Roadhog may have been an off-meta pickup pre-finals, but his impact was certainly felt. (Photo courtesy Blizzard)

The San Francisco Shock were crowned the Overwatch League 2020 champions last weekend and once again proved that they can conquer any team in any meta. With shields nerfed and Roadhog damage buffed for the 2020 finals patch, the teams experienced a true test of their flexibility. Roadhog, himself, became a hero to be expected to make a splash with great close to medium range damage throughout fights, and the most self sustain from any other tank.

In the past, Roadhog wasn’t a viable pick due to not having a good ability kit to protect his team compared to the other tank choices. He had a brief stay in the meta with Orisa when her halt and his hook were combined to pull in a potential victim. Sigma, Reinhardt, and even Zarya were used to counter the halt-hook combo, dropping Roadhog out of the meta. The finals patch introduced a reduction in Sigma’s projected barrier health (900 → 700) and barrier regeneration rate (120/s → 80/s), and a nerf to Orisa’s base armor (250 → 200) and halt radius (7m → 4m). These nerfs made shields too weak in the face of other tank line options, and revived the potential of Roadhog. Most importantly, Roadhog’s damage per projectile got a generous boost (6 → 7). With 25 pellets per scrap gun shot, this means Roadhog can do a maximum of 175 damage per shot (+25 from its previous 150 maximum damage per shot).

Interestingly, the main tanks of the teams were tasked to take on the role of learning Roadhog who has, up until this point, technically classified as an off-tank. San Francisco Shock almost exclusively ran Matthew “super” DeLisi on Roadhog, while Seoul Dynasty started Jae-hee “Gesture” Hong on Roadhog. Shanghai Dragons only played Ji-won “Stand1” Seo on Roadhog and  the Philadelphia Fusion split Roadhog time between Su-min “SADO” Kim and Jun-ho “Fury” Kim.

Super vs Gesture: The Ultimate Showdown

Prior to the finals, Super’s Roadhog was undervalued in comparison to his upcoming opponents by some parts of the community. Overwatch League commentator Josh “Sideshow” Wilkinson mentioned on social media after the first map of the Shanghai Dragons versus San Francisco Shock series: “This will be a totally different match once Shanghai force the Hog mirror.” The rest of the Overwatch League talent on their podcast Plat Chat spoke highly of Gesture’s Roadhog before the finals took place. When faced with doubters, Super called himself “a freak” and took those comments as motivation to take down Gesture.

Statistically, Gesture and Super on Roadhog had almost identical deaths, eliminations, and final blows (per 10 min) when they faced each other in the semifinals and grand final. The biggest difference seen in their performance on paper was damage given. Super did 10% more damage than Gesture on average during both series, which isn’t necessarily attributed solely to individual play.

An important compositional difference between Dynasty and Shock that enabled the Roadhog players was the choice of flex supports. Dynasty decided on Ana as their primary flex support, while the Shock preferred almost always the Zenyatta. Zenyatta can greatly contribute to higher levels of damage himself but is mainly served to weaken opponents with discord orbs. This ability places a 30% reduction of damage resistance on enemies, making Zenyatta a popular choice for teams that prefer to play aggressive and lead fights early with quick eliminations. San Francisco Shock head coach Dae-hee “Crusty” Park revealed that they used Super on Roadhog (instead of Myeong-hwan “smurf” Yoo) because of his aggressive playstyle, an important quality for this designed composition. 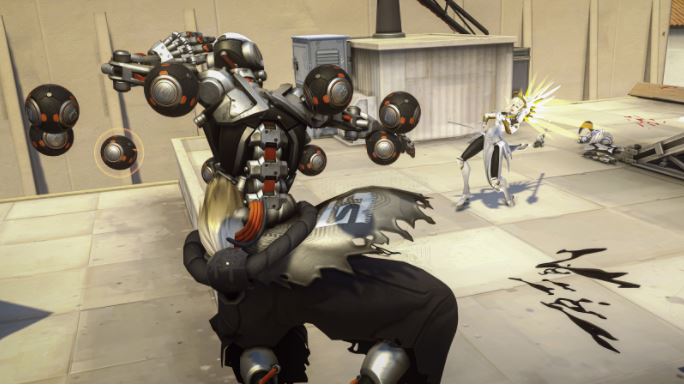 Viol2t’s Zenyatta taking matters into his own hands against the Seoul Dynasty on Hollywood. (Photo courtesy Blizzard Entertainment)

On the other hand, some teams preferred Ana for her utility and higher healing yields to provoke longer team fights and give more time for DPS players to make plays. Her biotic grenade acts as a Roadhog kryptonite if he exposes himself to her anytime during a team fight. A biotic grenade that hits an enemy blocks any incoming healing for 4 seconds. Super, one of the most aggressive Roadhogs at finals, explains: “You have to play differently versus an Ana as opposed to a Zen because if you try to go too aggro against an Ana, they can nano the Hog, and the hog is such a menace”. Ana’s ultimate applies a 50% damage boost and 50% damage resistance to a target, typically given to Roadhog players to sustain longer in the front line and focus down the opposing Roadhog first. Due to Roadhog’s large health pool, limited shields, and continuous poke damage, it’s to be expected that Ana players will have Nano Boost almost every fight. Therefore, fights with ultimates should favor the team with the Ana Nano Boost, unless the other team can escape or play around it intelligently.

The choice in flex supports alone tell a story of how dangerous the Shock can be with higher damage outputs, but also how punishable Shock’s frontline was with limited resources. The grand final between Seoul and San Francisco was incredibly close, and the positional nuances and adaptations throughout the series are beyond the scope of this article. However, one thing is certain: Super and Gesture have shown some of the highest level of Roadhog play the world has seen, and their success could only be assured by being surrounded by incredible teammates.

The Fusion Divide: Sado and Fury

Sado started for Fusion during their match against the Shanghai Dragons in the semifinals. Following a swift defeat, they substituted Fury for Sado in the match against the Seoul Dynasty in the loser’s bracket round 1 match. Although changes were made and spirits were lifted, the Fusion were knocked out of the finals without winning a single map.

When reviewing the tape for both of the Fusion’s matches, it was clear that the fault doesn’t solely fall on the shoulders of Sado or Fury’s Roadhog. There were many complete team disconnects and a lack of confidence observed that led to many fight failures. For the context of this article, we can focus on the lack of synergy in Fusion’s tank line that other teams did not experience, which led to their eventual front line demise.

On Fusions’ attack for the point on King’s Row against the Dragons, Sado can be seen traveling far and wide to get behind the defense and attain the high ground to drive away the Dragons’ snipers from their position. Sado managed to pull away half of the Dragons from the point and take their attention away from Fusion’s frontline. During this escapade, there was no progress towards the objective, and no clear sign that the Fusion knew what to do without Sado and with the opportunity they were given.

The tank line combination of Sigma and Roadhog must work together to protect each other and find picks against the opposing tank line, while the DPS will typically battle at long distance. The Sigma’s projected barrier acts as an important tool to block the lines of sight of an enemy Roadhog’s incoming hook. Throughout the first semifinals, there were disconnects between Sado moving forward as Roadhog and Fury not being on the same page, or mistiming his projected barrier, causing Stand1 to successfully hook in Sado and eliminate him from the fight.

After a disappointing loss to the Dragons, the Fusion tried to adjust their tank line by playing Gael “Poko” Gouzerch with Fury for their match against the Seoul Dynasty. To give Fusion credit, this tank line looked much more cohesive than their previous iteration. The issue in this match relied on a major contrast between the snipers from both teams. The Dynasty DPS players were consistently lining up the first and second eliminations in each fight, thus not giving the chance for the tank lines to get close to each other to make a significant difference. Fusion’s tank line was forced to provide more assistance to their snipers with project barriers and additional damage, which gave Dynasty’s tank line more slack to go unnoticed on the flank. Matt “Mr X” Morello, Overwatch League commentator for this match, can be heard repeating: “You cannot allow Gesture to walk around the map as he pleases on the flank . . . They never punished him at all”.

There were still some minor miscommunications within the tank line during their final series, to be expected from any team in a similar situation with the frustrations they faced.

Roadhog was a staple hero in the Overwatch finals meta, an important source of damage, pick potential, and flank potential for teams. At peak Roadhog play, Super and Gesture had to beat each other by adapting their positioning and playing in perfect unison with their team. While on the opposite spectrum, fans got to witness how a team at its core falls apart if communication and tank line cohesion isn’t at its best. Whatever the meta develops into in the future, San Francisco is the best team in the world. Not just because of their mechanics and coaching lineup, but the meta resilience that they have shown and their ability to adapt to their opponents no matter the circumstances and stakes.