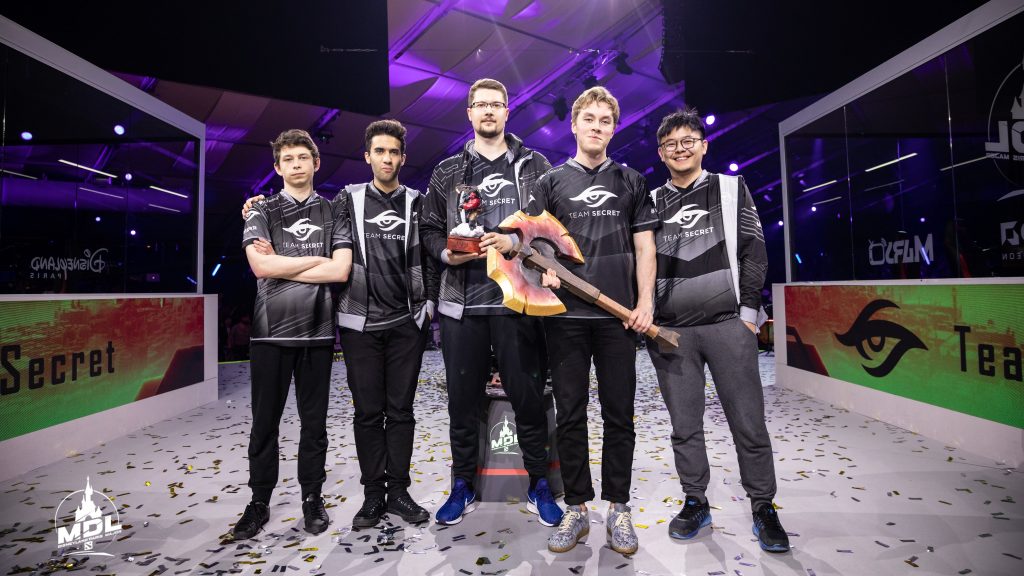 Team Secret has won another event, a year to the day after their victory at the MDL Disneyland Major. (Photo courtesy MDL)

Team Secret has defeated VP.Prodigy to be crowned the winners of the inaugural WePlay! Pushka League Division 1 championship. The European team battered their CIS opponent’s in a 3-0 sweep that saw one of the most storied teams in the whole of Dota barely break a sweat in the face of their opponents.

WE MADE IT! WE ARE YOUR WEPLAY! PUSHKA LEAGUE CHAMPIONS 🔥

Thank you to all our fans for your continued support during these challenging times 🖤#SecretDota #Dota2Pushka pic.twitter.com/dAh3NP0Ymp

In a tournament that’s seen some less noteworthy teams come to prominence, the ultimate result was to be expected, with one of the most dominant teams in Europe cleanly sweeping their opponent’s in a savage display of talent and execution. Try as they might, the youthful talent of VP.Prodigy couldn’t stand up to the veteran Team Secret roster, and despite a genuinely incredible series of performances throughout this event, fell short in the grand finals.

Where the chips fell

Before we could entertain these finals, though, there was plenty of Pushka League action to enjoy throughout the playoffs.

In the lower bracket, it was time to say goodbye to several teams, as the one-sided stomps came quick and fast. Alliance demolished Natus Vincere, and Virtus.pro dispatched Ninjas in Pyjamas, sending the latter home in fifth place. NiP had previously been shocked to find defeat at the hands of eventual finalists VP.Prodigy. But their loss shouldn’t be taken too far out of context. This is, of course, not the NiP roster we’ve seen for most of the Dota Pro Circuit season, but the former Chicken Fighters lineup. Fifth place for a team who were virtually tier two prospects a few weeks ago is nothing to turn your nose (or beak) up at.

No sooner had Alliance and Virtus.pro finished off some of the best Europe had to offer though, they clashed with a rising force: Team Liquid. The squad, who’ve battled with inconsistency sprung to life in the latter half of this tournament, finally hit their stride. Against Alliance, it was Tommy “Taiga” Le and Samuel “Boxi” Svahn who were really the heroes of this series. With their Shadow Demon/Centaur Warrunner combo, the offlane pair managed to hamstring Nikolay “Nikobaby” Nikolov, never letting Alliance’s carry get off the ground. Without his impact, Alliance fell 2-1.

Against VP, the demolition continued. TL had made mistakes against the CIS team in the upper bracket and had seen games pushed far longer than they should have been. But here, they weren’t about to allow themselves a loss. In two decisive displays, the TL swept the CIS bears, leaving just their opponent’s youth team standing between them and the finals.

It was here, though, where the team would crumble. Faced with a personal tragedy, team captain and support Aydin “iNSaNiA” Sarkoh admitted he underperformed in this final series against VP.Prodigy.

Sorry to all the fans today. I had quite an off day and @virtuspro prodigy showed up with stronger drafts.

My grandmother recently passed away and I attended her funeral today. Wasn't in the best state of mind and didnt have the full clarity I needed.

See you all at dotapit!

What’s more, the team was given a draft penalty just before the match due to Michael “miCKe” Vu having internet issues.

Micke had internet issues, and so we were assessed a draft penalty which is understandable and fair. Thanks to @virtuspro for insisting on us having our full lineup and letting us try and get Micke back in.

Ultimately this combination of issues, along with VP.Prodigy’s incredible play, meant Team Liquid would not advance in the tournament.

The teams had previously met in the Upper Bracket Final. There, Team Secret had gotten the better of VP.P but had looked shaky in doing so, particularly in the first game. Faced with fed Phantom Lancer, it was only the supreme coordination of Team Secret that prevented disaster. The layered crowd control of Earthshaker and Tinker caught out Prodigy one too many times, averting the loss, and giving the team momentum for the second match. There they quickly dispatched their opponents, with a Pangolier/Lycan combo that fash-pushed the team to victory.

As the teams clashed in the Grand Finals, VP.Prodigy knew their best chance was once again a knockout punch in game one. Attempting to overwhelm their opponents, the team picked Death Prophet, Windranger, and Clinkz and attempted to just siege down their opponents. But the supremely disciplined team fighting of Secret prevented this strategy from bearing fruit.

Game two, Prodigy found themselves with their backs against the wall as Secret’s carries powered through their early game heroes. As a result, Prodigy settling in for the long haul, picking up a Hand of Midas on Faceless Void, and looking to scale into the super late game. But After one big fight, VP.Prodigy threw in the towel, sending us to game three after just 17 minutes.

With tournament survival on the line, the Prodigies went back to something that had worked before. Egor “epileptick1d” Grigorenko’s Monkey King had wrought havoc on Alliance, shutting down hard carries and out roaming their opponents. The team hoped this would be the solution to Team Secret’s seemingly unstoppable tide.

But in-game it didn’t matter. Secret’s Troll Warlord mid and Batrider combo was far too strong. The Troll, in particular, solo’d the tier one tower just eight minutes into the game, creating such ridiculous pressure on Prodigy. Ultimately there was really nothing Prodigy could do, losing this final game in under 30 minutes.

WePlay! At It Again

This was VP.Prodigy’s first major tournament, and the youth team of Virtus.pro has shown they’re capable of great things. Advancing further than their sister team, and even making it to Finals showed how talented this group is.

Brilliant debut for the VP.Prodigy boys 💪🏻

Our cubs lost only to @teamsecret and finished the playoff stage in the second place with $45 000!

Thank you for your support ❤️ See you soon 😉 #GOGOVP pic.twitter.com/wsZxzpg201

Secret cruised to this finals without dropping a single game in the playoffs, and just three games in the entire tournament. It was an incredible display from a fantastic team that continues to be the very peak of European Dota in a time while other top teams are falling out of relevance.

One year ago, on this exact day, we were crowned Champions of the MDL Disneyland Major…

Today’s victory has a different taste as we compete online but we hope you enjoyed watching us play the best Dota we know.

WePlay! has once against put on an incredible tournament, despite difficulties from the ongoing worldwide situation. With remote casters, great on-air talent, and slick production, they’ve again shown how talented an organization they are. It will be exciting to see what they can bring.

If you’re worried about missing top-quality Dota with this event ending, have no fears! The next big EU and CIS event begins tomorrow with the AMD SAPPHIRE DOTA PIT Online EU/CIS Region tournament. Tune into the OGA Dota PIT Twitch channel tomorrow from 11:00 CEST to see the opening match between OG and HellRaisers.