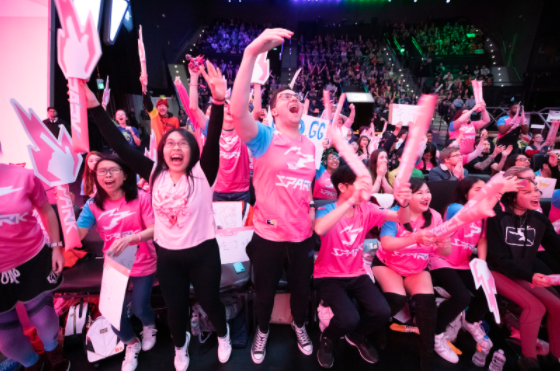 Shanghai came out like the contender they’re expected to be and laid the smackdown in the first game of the weekend. Chengdu and Hangzhou went down to the wire in a series that coursed with chaotic energy. The broadcast went off largely without a hitch. All in all, it was an excellent beginning to this new era of the Overwatch League.

The Dragons Make It Look Easy

Going into this morning’s games, Shanghai was the clear favorite, both in their match against Guangzhou and in the Chinese region overall. They emerged from the offseason with a revamped roster that built on what they had established in 2019. It was those new faces that took center stage on Saturday as Shanghai rolled out with Izayaki as the lone returning player.

Despite facing off against a Charge team with a lot of pre-built synergy, the Dragons were the more coordinated team in addition to outclassing the Charge in terms of talent. They minimized mistakes extremely well, denying opportunities for Guangzhou’s DPS stars, nero and Happy.

In case you missed it…

Instead, it was Shanghai’s DPS duo of Fleta and LIP who took over the game. When things went sideways on Nepal, those two were able to put up carry performances on Tracer and Doomfist respectively. Fleta especially had the killer instinct on the first map of the series.

From that point on, he started to take the back seat, picking up Mei to provide more utility on Route 66 and Eichenwalde. From there, it was LIP’s Hanzo that dominated the rest of the series, consistently finding early picks and working so well around his team.

For the Charge, it was a disappointing debut. They weren’t expected to win, but this turned into a beatdown very quickly. Hot starts from Happy faded quickly on both of the first two maps, and he struggled to make an impact all match. By the time Eichenwalde rolled around, it felt like the series was already over. The Dragons had absorbed Guangzhou’s best punches and shrugged them off with ease.

The silver lining here is that the meta did not seem to favor Guangzhou. Outside of a few exceptions, both teams were running double shield comps for most of this series. Where Shanghai looked coordinated playing around Halts from Stand1’s Orisa, Guangzhou was scattered. Why the Charge decided to mirror the Dragons is something of a mystery, but I’d expect them to fare better when they can play less rigid compositions.

Hangzhou Overcomes the Hunters In a Nailbiter

While the opening match may not have been the most competitive, Chengdu and Hangzhou delivered. Leave’s OWL debut, copious amounts of Wrecking Ball, and a reverse-sweep from the Spark made for one of the best matches of the season to this point.

Everything started so perfectly for the Hunters. Hangzhou decided to match Chengdu’s Wrecking Ball dive on Ilios. Leave was popping off on Tracer and Doomfist. Jinmu’s Pharah gave the Spark fits on Dorado, leading to a full hold and a 2-0 lead in the series for Chengdu.

Then the halftime adjustments came in for the Spark. They started running Guxue on Reinhardt more to give his team a maneuverable shield to limit Ameng’s ability to lang big Piledrivers. They focused hard on the Hunters’ main tank, playing McCree and Brigitte for the stuns and stopping  Wrecking Ball in its tracks with Mei. Stellar defensive efforts on Numbani and Paris forced the series to a map five decider.

On Oasis, the Spark were able to take Gardens largely on the back of an early lead that came entirely from a pick by Bazzi onto Leave’s Tracer. Chengdu answered back on City Center, where their Wrecking Ball dive comps flourished in the open space.

It all came down to University, where Chengdu started strong with a perfectly executed set play around Yveltal’s sneaky Biotic Grenade. The Spark were able to keep their cool, fighting back by controlling space and forcing mistakes from the Hunters. Once they had lost the point, Chengdu’s scrappy nature came back to bite them. Because their comp is very mobile, they constantly tried to keep fights going even when a reset would probably have served them better. Sometimes that works for the Hunters, but here it just meant they never got the decisive fight they needed to fully regain control. GodsB was once again the secret carry for Hangzhou as the closed out an impressive reverse sweep.

The Kids Are Alright

The one enduring takeaway from Saturday morning’s matches has to be the brilliant debuts of several OWL rookies. For the Dragons, LIP may have stolen the show, but LeeJaeGon and Stand1 were both rock-solid in their first outings. Even on the other side of that series, Cr0ng was a standout for Guangzhou. His Sigma, in particular, impressed and helped keep Guangzhou in the series for a while.

Hangzhou was the lone team that didn’t have a rookie on the stage, but they got the first taste of what Leave can do on the OWL stage. The Chengdu damage dealer definitely had an up-and-down performance in his much-anticipated debut, but there was enough there that Hunters fans should be beyond excited to see him play.

These players join names like Alarm, Hanbin, and Yaki to form an absolutely stacked rookie class. The talent pipeline is as strong as ever, and the results so far have been magical to watch.