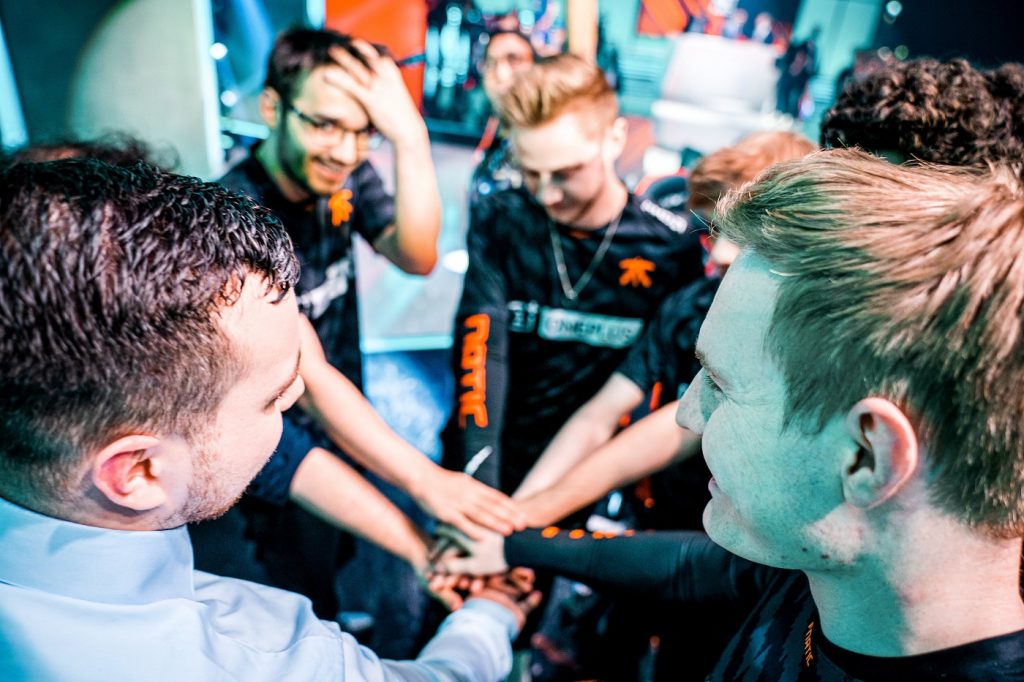 Fnatic were just shy of victory in a dramatic LEC playoff clash with G2 Esports. (Image via Fnatic)

After an incredible weekend of matches, we now have just three teams left in the race for the LEC Summer 2019 championship. On Friday and Saturday, August 30 and 31, the very best of EU League of Legends competed in the LEC playoffs as Rogue took on FC Schalke 04, and Fnatic faced off with G2 Esports. Saturday’s match would decide who advanced to the finals, and who drops to the lower bracket, with both G2 and Fnatic attempting to prove their dominance of the LEC. But before that, we saw a hopeful Rogue fall to a Schalke squad that had struggled with consistency.

Rogue had shocked the LEC last weekend with a win over Splyce. In a result almost no-one had predicted, the young team obliterated Splyce 3-0. Schalke on the other hadn’t looked overly strong in their round one win over Vitality. As a result, this matchup was almost too close to call. On paper, Schalke were the better team, with a lineup filled with veteran players. And yet Rogue was in their best form of the season and had the potential to secure a deeper spot in the playoffs.

Rogue was hot out of the gate in game one, quickly capitalizing on mid pressure to turn an early tower, into full map control. As the game progressed, Emil “Larssen” Larsson’s Corki started to take control, able to pick off Schalke’s opponents from any angle. In short order, Rogue had won and looked in the kind of form they’d need to progress.

But over the next three games, the team fell apart. Schalke rallied behind some incredible performances by Kim “Trick” Gang-yun and Andrei “Odoamne” Pascu. They carried their team to victory. The dominance and confidence that Rogue had shown in game one, and in their win over Splyce was nowhere to be found. Schalke map pressure, early game matchups and individual skill won out, as the team advanced to the semifinals, with an excellent chance to make it even further.

The next day, G2 Esports faced Fnatic in the upper bracket. G2 had been hotly projected to win this game, with the team having performed incredibly during the past two splits. The team has seemed unstoppable since their victory at the Mid Season Invitational and looked to add another LEC title to their trophy cabinet. However, Fnatic has been on top form. The team are hot off a four-game winning streak in the regular season and have proved in the past, that when they’re at their best, they can easily defeat G2. With G2’s seeming dominance and Fnatic’s incredibly high level of play, we were sure to have an incredible set of games.

The teams didn’t disappoint. In game one, Fnatic picked up the Garen/Yumi bottom lane, giving G2 a taste of their own unorthodox medicine. G2 for their part seemed to have this unique lane matchup scouted, and confidently locked in the Mordekaiser to counter. But in-game, the confidence was lacking, as after initially looking strong, G2 fell apart. Fnatic dominated the first game, forcing G2 into a different style of play.

For game two, the drafts looked far more ordinary, which translated into a more standard style of play. But things quickly turned chaotic, and G2, who usually thrive on chaos, was unable to grab a lead. Both teams managed to stay neck and neck for the majority of the game, but after several equal team fights, Fnatic managed to capitalize on G2’s mistakes. In a disappointing loss, the one shining light for G2 was Rasmus “Caps” Borregaard’s Akali, who was able to act as both frontline and carry for the team.

With this potent weapon in G2’s pocket, Fnatic opted to take away Cap’s Akali for the next game. And initially, it as if G2 would fall 3-0 in the series, as Fnatic quickly took the lead in the game. G2 found their inhibitors destroyed, and their lanes pushed. However, somehow the team held on, with Luka “Perkz” Perković power farming side lanes to catch up the deficit. Eventually, G2 was able to turn things around, and in spite of not winning a single team fight the entire game, were able to overcome Fnatic’s huge lead, and prevail.

You really thought it was going to be that easy @FNATIC? 😉

Heading into game four, G2 opted to take away the Renekton that had caused so much trouble in the top lane. They also banned away Gangplank and Aatrox, in an attempt to shut down Gabriël “Bwipo” Rau champion pool. As the game began, the team finally showed the kind of performance that has had analysts projecting as potential world champions. In-game, the team fundamentally played well, placing good wards, rotating for objectives and taking advantage of their opponent’s mistakes. But they also took advantage of one of their greatest strengths: Their versatility. After picking up the Akali early in the draft, seemingly for Caps, the team rotated it into the top lane for Wunder, to counter Shen. And a perfect counter it turned to be, utilizing Akali’s Shuriken Flip to follow up on any play the Shen made. After thrashing Fnatic in this game, G2 headed to game five with momentum on their side.

With match point on the line, both teams opted for reliable, strong drafts on comfort champions. Fnatic ensured that Caps and Wunder were deprived of the Akali. As the game started, G2 started strong, setting up a gank in the middle for first blood, and turning a bot lane gank into three kills. They transitioned this into a dominant performance, shutting down Fnatic in the final game in convincing fashion. G2 head to the finals, having reverse swept their opponents in this thrilling series.

Fnatic is left asking what went wrong. The team had some stand out performances but just couldn’t put G2 away. In particular, Bwipo’s Renekton play in games two and three was fantastic. In the top lane, Renekton has to get kills early, and create pressure, to take full advantage of his aggressive kit. And Bwipo did just that, drawing the focus to his lane, out-playing Wunder in one on one situations and generally wreaking havoc. When it was banned, and the top lane was no longer the focus, Fnatic looked weak.

The team must now fight for another chance to face G2 Esports next weekend, after a Round 3 battle with the victorious Schalke.