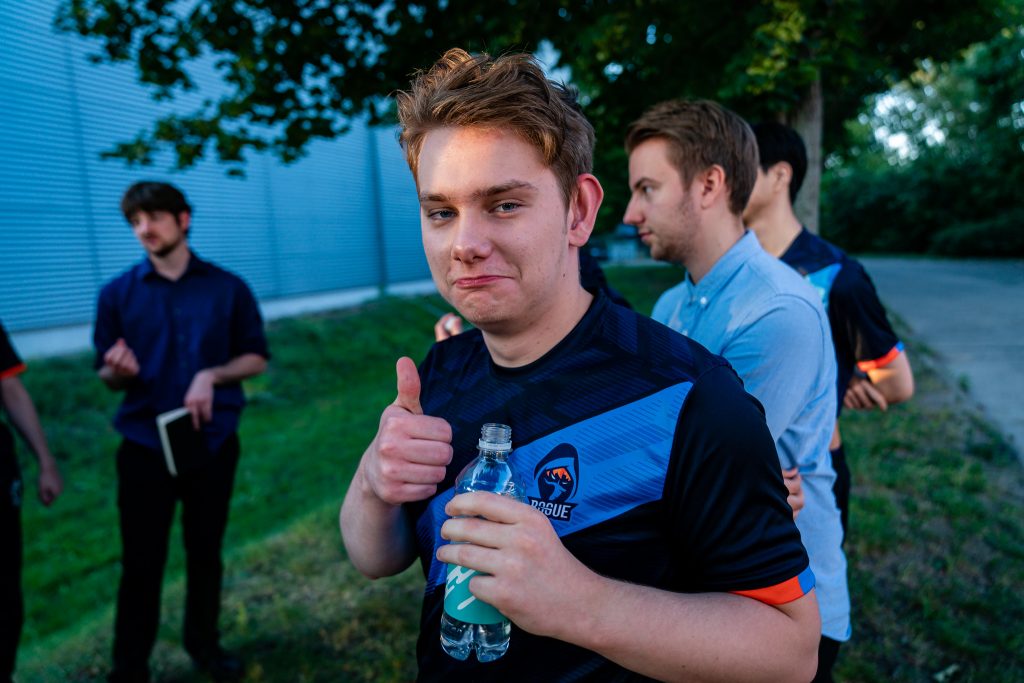 Rogue and FC Schalke 04 advance to the semifinals of the LEC Summer Playoffs. (Image via Riot Games)

The 2019 League of Legends European Championship (LEC) Summer Playoffs opened with a pair of dominating victories in round 1 this weekend. Rogue kicked things off with a 3-0 sweep of Splyce on Friday, followed by FC Schalke 04 taking a 3-1 win over Team Vitality. The playoffs will continue with round 2 on Friday, August 30 and Saturday, August 31. Rogue and Schalke 04 will play an elimination game, while top seeds G2 Esports and Fnatic face off for the right to an automatic finals berth.

It wasn’t long ago — only last Spring Season — that Rogue were 2-16 and the worst team in the LEC. The organization was clearly not content with that output, making sweeping roster changes heading into the Summer. Rookies Emil “Larssen” Larsson and Kacper “Inspired” Słoma showed promise on the new roster and gave reason for optimism. That, coupled with a few wins strung together showed clear improvement, but nobody could have seen where this team was heading at the end of the season.

Rogue underwent one more roster change mid-season, moving Finn “Finn” Wiestål to starting top laner, and the team was complete. Now that rookie trio is in the playoffs and performed at a high level against the previously 12-6 three-seed Splyce. Veterans Paweł “Woolite” Pruski and Oskar “Vander” Bogdan deserve their credit, but they have been tested in playoff action before. Finn, Inspired, and Larssen made the most of their first opportunities.

Together, the rookies were a combined 39/12/56 over the course of the three-game domination. Finn smashed veteran Tamás “Vizicsacsi” Kiss repeatedly, while Inspired put up huge kill participation numbers and Larssen seemed like he couldn’t be killed in the series. None of the games were even particularly close — Rogue needed only 25, 27, and 27 minutes to close out their sweep. That was a far cry from their final regular-season matchup in which Splyce led the entire way in a 35-minute victory.

While patience can be important in giving a team time to come together, this Rogue roster should also be a lesson in what can happen when a team recognizes their weaknesses and gives young players a chance to shine. Their talent will be on full display in round 2 of the LEC playoffs against FC Schalke 04.

There’s been no secret that Elias “Upset” Lipp and Amadeu “Attila” Carvalho don’t hold fond feelings for each other. The ADCs of FC Schalke 04 and Team Vitality are always shown trash-talking each other before their matches, confidently proclaiming themselves the better player. But after their latest matchup, Attila will have a hard time getting anyone on his side after Upset got the best of him in the series.

Statistically, Upset had the better Summer Season by a long shot. Not only was his team four games better in the standings, but he was better than Attila in basically every major statistical category: KDA, CS per minute, gold per minute, kill participation, and kill share. Sure he also had a larger gold share, but clearly a lot of that had to do with generating that gold for himself, rather than just being funneled.

.@S04Abbedagge picks up an unofficial Pentakill and closes out Game 2 on his own! #LEC#AWBigPlay | @Alienware pic.twitter.com/Cpr3cUW3h3

So when they matched up on Saturday, it should have come as little surprise that Upset would come out with the upper hand. What may have been surprising, though, was how one-sided the matchup was. Upset outperformed Attila in all four games of the series, including the game three that Team Vitality won. In that game, Upset still dealt more damage (24.5k to 18.9k), with a better K/D/A (8/2/4 to 4/3/9) while being funneled less farm in the late game.

As if that wasn’t enough, Upset and Schalke showed Team Vitality’s bot lane the ultimate disrespect when they left Yuumi open in game four of the series. Vitality took the bait, pairing her with Garen in bot lane. That didn’t work well. Upset’s Kai’Sa dominated, going 12/1/9 with 35.3k damage dealt. Attila’s Garen did not dominate, finishing 1/4/5 with 4.9k damage dealt.

It’s no secret that Attila’s jungler Lee “Mowgli” Jae-ha did him no favors, and Vitality may be searching to add competition for support Jakub “Jactroll” Skurzyński in 2020. But when the games mattered the most, it was clear for all to see that Upset is just a step above Attila in 2019.

The two round 1 winners now face-off in round 2 for a chance to make it to the semifinals. Schalke had the better season, have the experience edge, and have every reason to be seen as strong favorites heading into the match. However, you can’t discount how completely Rogue dismantled a 12-6 Splyce team in round 1.

Even though bot is Rogue’s most experienced lane, that could be where Schalke try to take advantage. Upset and Lee “IgNar” Dong-geun crushed Attila and Jactroll in round 1 and have the pedigree of an elite bot lane. Rogue might very well need to play through Finn — the man with a grand total of nine LEC games in his career, including the three playoff games he just played.

The two European powerhouses and top seeds in the LEC will play for the right to an automatic berth in the finals in round 2 of the playoffs. The loser will move on to round 3 to play the winner of Rogue versus FC Schalke 04.

All eyes will once again be on the mid lane matchup as Rasmus “Caps” Winther faces his old team. Fnatic will need a vintage performance from Mads “Broxah” Brock-Pedersen to advance. This is as good as it gets in the LEC.