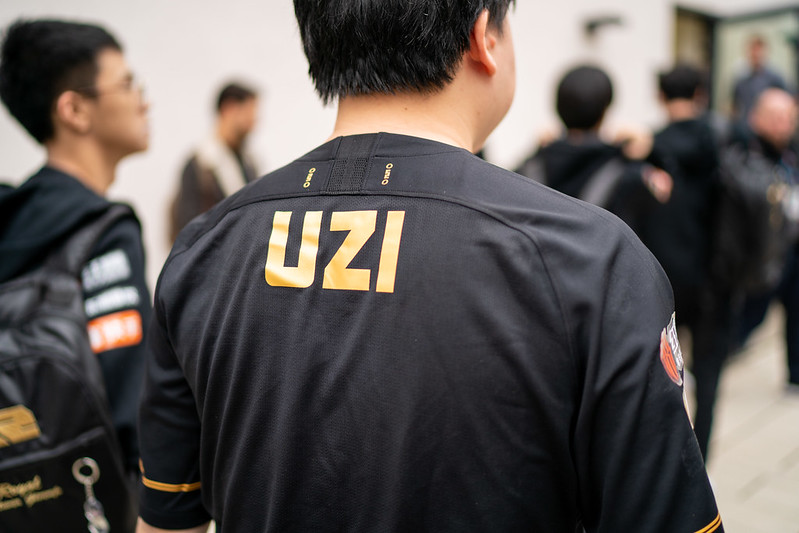 It’s the end of an era as Royal Never Give Up moves on from Uzi. (Photo courtesy Michal Konkol - Riot Games)

Royal Never Give Up have announced that star ADC Jian “Uzi” Zi-Hao has retired from competitive play. The move comes as little surprise after Uzi was absent from the team’s Summer Split roster announcement.

As of today, LPL0006 @UziRNG will officially retire. Uzi was not only the heart and soul of RNG, but also an icon in the esports world as a whole. From a teenager onwards he never gave up and worked as hard as he could to be the best he could in his role, he inspired many. pic.twitter.com/wsqqOnqE4o

Uzi’s constant injury struggles seem to have finally ended his career. In a follow-up tweet, RNG wrote: “Due to injuries accumulated over 8 years of high intensity training, at the suggestion of medical professionals, Uzi was advised to rest during the 2020 LPL spring split. After spring a decision was made and we understood and respected his wishes, and will continue to assist him.”

Take a look at the RNG 2020 summer LoL division

We will try to bounce back from our spring split and work hard in the summer!#RNGWIN pic.twitter.com/nrZdIU6Pmg

Uzi made his pro debut with RNG, then known as Royal Club, back in October 2012. Uzi played for the team for two years before leaving for brief stints with Oh My God and Qiao Gu Reapers. Uzi then returned to RNG in May 2016 and has been with the team ever since.

During those seven years of play, Uzi has established himself as one of the best players in League of Legends history. Known as probably the most gifted ADC ever, Uzi also has to be considered the greatest player to never win a World Championship. Twice on the cusp of immortality, Uzi’s team fell short in the finals: once to SK Telecom T1 in 2013 and once to Samsung White in 2014. Uzi also lost 3-2 in the semifinals of the 2017 World Championship.

Despite coming so close on the international stage, Uzi had never won a title of any kind until 2018. That year he and RNG won both the Spring and Summer Split of the LPL and beat Kingzone DragonX to win MSI 2018. However, an upset loss to G2 Esports in the quarterfinals knocked them out of the World Championship.

Despite streaming regularly, Uzi has yet to play professionally in 2020. He typically rests through the Chinese New Year, but everything was thrown off by the coronavirus pandemic this year. He was unable to return to the team immediately due to his proximity to Wuhan when LPL play resumed, but Uzi never returned to the team after travel restrictions were lifted. It is unclear whether that is an indictment on his health or if he and the team had already decided to part ways for Summer.

Lu “Betty” Yu-Hung will continue as RNG’s starting ADC this split. Despite playing in the shadow of Uzi, Betty had a strong Spring Split and RNG were confident enough in his abilities to name him the starter without competition.

However, there will be new competition in the solo lanes. RNG brought in 705 and New to compete in top lane, while former eStar rookie Cryin will challenge Li “Xiaohu” Yuan-Hao mid. 705 should be considered the early favorite after his recent experience filling in for Zhang “Zoom” Xing-Ran on JD Gaming. Though New has reached the LPL previously with Vici Gaming, he has spent the past two years playing in the LDL. The duo will replace Xie “Langx” Zhen-Ying, who recently departed for LGD Gaming.

The mid lane competition will be more interesting. Xiaohu has been RNG’s mid laner since he joined in May 2015, but his performance has dipped over the past couple of years. Meanwhile, Cryin had a spectacular debut split with eStar after and now re-joins the organization that developed him in the LPL. Given his recent success, potential for growth, and the cost of acquiring him from eStar, it would be surprising if Cryin does not get every opportunity to win the starting job initially.

We’ll get our first look at RNG’s new roster when the LPL kicks off the Summer Split on Friday, June 5th.