PraY: “This is not the storyline KT Rolster wanted.” 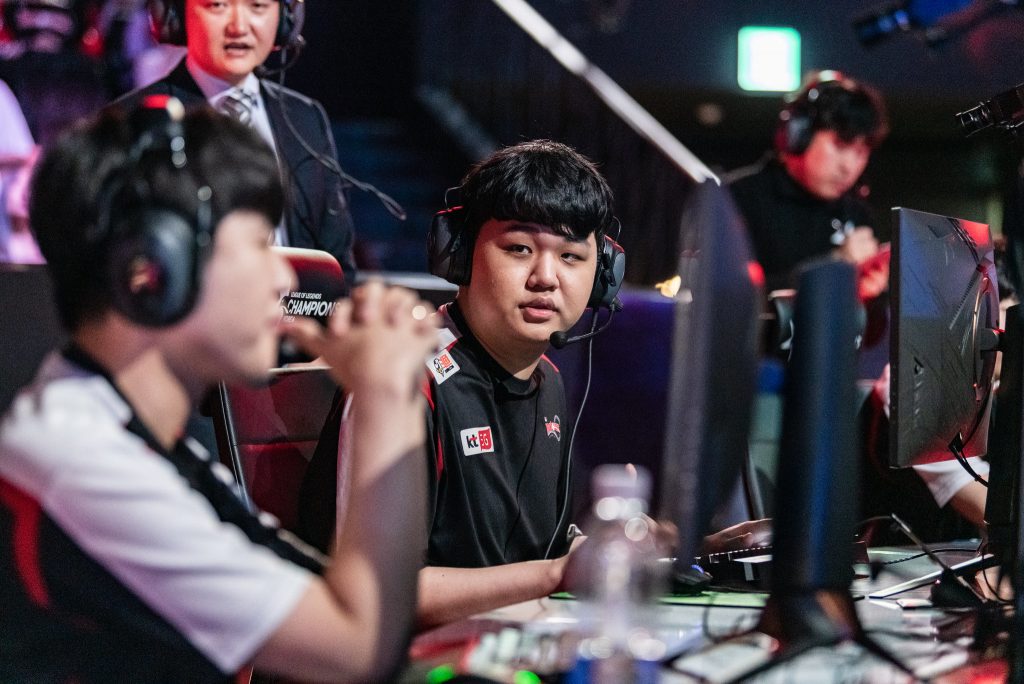 KT Rolster faced a make-or-break Week 8 series against Hanwha Life Esports on Friday evening. Both teams were locked on 3-11 records coming into the clash, and though although the relegation race isn’t mathematically over, this was both team’s grand final.

The storyline of the split for returning bot laner Kim “PraY” Jong-in and KT have been a far cry from the honors and exploits of the past. After fifteen matches played, the illustrious roster has found itself a single win outside the bottom two.

In his personal achievements, PraY is a three-time LCK champion and finished in the final four at three World Championships. KT as an organization has also risen to the top of the Korean scene, claiming the championship in LCK 2018 Summer.

For a veteran of the League of Legends scene, it’s clear the pain of languishing in a relegation scrap just above the Korean drop-zone is one that weighs on PraY’s mind.

“This is not the storyline we really wanted, we have been underperforming a lot so we wanted to do our best [against Hanwha] and show improved performances for the fans that have kept supporting us all this time,” PraY told media at LoL Park.

“It was a very significant match for both us and Hanwha Life, so we’re really happy to pick up a 2-0 win. The teamwork has really warmed up, so we want to show those improvements.”

After opening their season with a 2-0 win over Jin Air Green Wings and a 0-2 loss to Hanwha Life, KT struggled to find their feet. A three-game victory over Gen.G seemed to have stabilized the team, but six straight losses waited on the horizon.

The 0-6 run, which included a lackluster entry in the ongoing Telecom War saga, saw KT slide right back into the relegation mix they had just escaped in Spring.

It’s been a hard road back for PraY since his short retirement from the LCK. Image via Riot Korea.

With eleven losses to their names, PraY and KT knew the Week 8 meeting with Hanwha may be a result that determined their entire Summer fate. “Since we had the possibility to go to relegations, we prepared for this match like LCK finals,” said PraY.

“It took such a long time to win a game. We should’ve won the games we were able to win. But we didn’t. Our performance was not good. That means we are not good. It might mean we are not talented enough, but we will do our best.”

While PraY may be doubting whether his veteran talent is still razor-sharp, KT’s bot laner proved he’s still got it with a decisive call in game one.

After a messy skirmish at the Rift Herald, KT emerged with four kills to two. In return for the fight loss, HLE had scored the Herald buff on bot laner Gwon “Sangyoon” Sang-yun. There was only one path for them: force a bottom lane push.

“It was really too obvious that Hanwha were going to bring Herald bot,” PraY said in the LCK post-match interview. “I made the call there might be a teamfight there, and so the rest of the team were ready to teleport there for back-up.”

Go “Score” Dong-bin loitered behind the turret, waiting for the play PraY had predicted. Hwang “Kingen” Seong-hoon and Gwak “BDD” Bo-seong teleported into the bush moments after Hanwha pulled the trigger. Two laners turned to five KT players in an instant.

The call rocketed KT into the lead. PraY’s side collected three kills for free and burned down a free Cloud Drake. Hanwha’s activated Herald didn’t even crack the turret.

PraY is hoping he can smile again as KT Rolster looks to avoid relegation. Image via Riot Korea.

Moments like these are what PraY says he lives for on the LoL Park stage, and with League of Legends. That’s not to say that his return to the championship has been the smoothest ride – it can’t ever be easy when your team cannot find a victory.

“I told my teammates that I’d regretted my return once,” PraY revealed.

“It took a lot of determination to join this team and I was worried that I wouldn’t have enough time to play with my teammates. It was a relief because the team put in a lot of effort for me. The boys here very positive players and we’re working hard to do well.

“Along with all of the KT players, I’m responsible for my team’s record too. What I’m just trying to do is to display better performances for the fans.”

The win over Hanwha may have lifted a load off the bot laner’s shoulders. To return to a team heading into a relegation scrap may have been too much for the veteran, especially considering he’s struggled to rekindle his love for the game.

Most importantly for PraY now though, he’s back to enjoying his time back on stage.

The two months he was officially retired didn’t suit the superstar bot laner, even if the road back to feeling settled in the LCK has been a bumpy one.

According to the man himself, seven years playing in the professional scene, from Najin Black Sword to Longzhu Gaming, and now to KT, just isn’t enough. He wants to tick a few more years off the checklist before his compulsory military service.

“I’ve told my fans this might be the last chance to see me on stage,” he said.

“I actually didn’t think I’d get to perform in the LoL Park. It was dramatic to be able to join this team. Now I’m going to put in my utmost before going to the military, and stretch my pro career to eight or nine years.”

PraY may be thinking of the distant future – a time where he hangs up the mouse and keyboard for good – but he still has his mind very much in the present too. KT Rolster has a major battle on their hands next round: first-placed Damwon Gaming.

The Korean legend, ever the optimist, has no fear coming into the challenge.

“We will be able to win the match against Damwon, which is the number one team in the LCK,” he said. “We are a team that can beat any top team, and we’ll try to do that as many times as possible.”