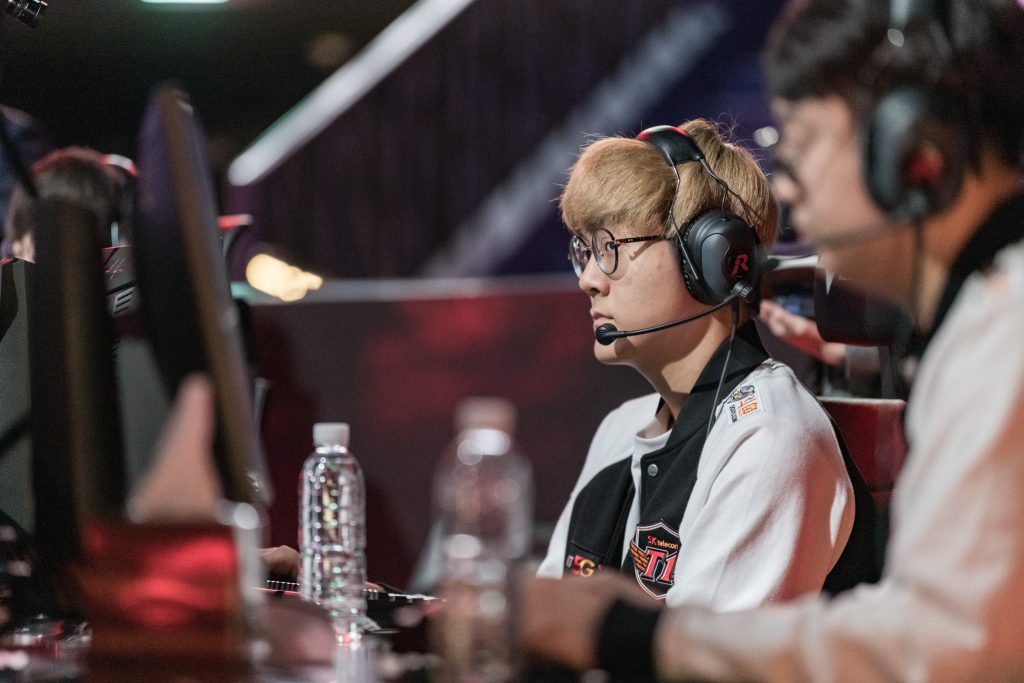 Park “Teddy” Jin-seong was a key carry for SKT as they scored a 2-0 win in a lackluster Telecom War. Image via Riot Korea.

Once the most hyped series in League of Legends, Korea’s mainstay rivalry appears to have become an afterthought as the LCK Summer Season wraps up Week 4. For the Korean league, all eyes have turned to their ensuing rematch against China at Rift Rivals. It’s a chance for the fallen titans to recover their international glory – but how are the LCK representatives shaping up after eight matches so far this split?

The Telecom War has Lost Its Luster

With one team in seventh-place after the “epic Telecom War battle” and one locked in the relegation zone with a 2-6 record, it’s clear the long-standing rivalry between SK Telecom T1 and KT Rolster has hit a low point.

Where once these two titanic organizations, both of whom have ruled the roost of competitive League of Legends at one stage or another, and in different capacities, now the winner of this series was the one to clear the drop-zone in LCK 2019 Summer.

How the mighty have fallen.

SKT versus KT used to be the series that fans across the world, whether they enjoyed and followed the LCK or not, would tune in to. It was often a 2-1 result either way and showed off some of the highest class of LoL anywhere on the planet.

This time around, it was almost a little sad seeing massive names from the league struggling to find their tempo in the clash, on both sides.

A particularly egregious moment came when SKT’s support Cho “Mata” Se-heyong offered top laner Kim “Khan” Dong-ha an Abyssal Voyage into battle. The map-hopping ultimate dropped Mata and Khan – who up until that point had been having a strong game on Aatrox right into back-to-back deaths that handed KT the waiting Baron Nashor.

For most teams, two of the strongest players on the team accidentally sending themselves to their deaths would be a strong opening to take control of the match. Claiming the map-controlling Baron buff off that would be game breaking.

Another veteran of the league had his chance to throw away the game, however. Kim “PraY” Jong-in, who has been a shadow of his former self since coming out of retirement to bolster KT’s bot lane stock, nearly single-handedly cost his their chance to close out the first game of the series as he got caught out in the second Baron dance. His death saw SKT snatch up Baron, and Elder Drake, and get on a roll that would see them win 15 minutes later.

Game two of the battle went better for SKT. The eventual 2-0 victors claimed all five dragons on the map and dragged the game out long enough for Park “Teddy” Jin-seong on bot lane hyper-carry Varus to click into high gear. From there, there was nothing KT could do as the Rageblade-fueled Varus dished out nearly 20k champion damage in just 37 minutes.

The second-game result between Teddy and PraY may just be the best microcosm story of what is happening in Korea right now. SKT and KT are 3-5 and 2-6 respectively, but SKT has the benefit of young blood in their roster that split the difference in the Telecom War.

Teddy collected seven kills and seven assists for just two deaths with his two Varus games, while PraY 1/8/7 after outings on Kalista and Xayah. While the veteran ADC collected a game-high 28.4k damage on Xayah in Game 1 – a reminder of the unlimited talent PraY has in his wheelhouse – he was 11.6k behind Teddy in game two.

With the 2-0 victory tucked firmly in their belts, SKT has now put some pace on the ladder. They may still be four series wins away from the top spot after eight games, but a place in the Summer gauntlet is just one win above them now.

If they can take the Rift Rivals weekend to rest their game mentality, and forge onwards, SKT may be over the early-season slump that saw them lose five games in a row. With clashes against Hanwha Life Esports and Jin Air Green Wings, as well as the Telecom Wars rematch coming in recent weeks, they certainly have the platform in the fixtures to do it.

Now it’s just a matter of seeing if SKT has learned from their failings early in Summer.

Can Korea Revitalize Their International Fortunes?

Learning from failings is a common theme for the Korean league at the moment and one that the region’s Rift Rivals representatives will be turning over and over in their heads as they barrel towards a showdown with China’s LPL, as well as the LMS and VCS stars.

Next weekend SKT (3-5), Griffin (7-1), Kingzone DragonX (5-3), and Damwon Gaming (6-2) welcome a host of star-studded rosters to their shores. It’s the LCK teams’ hopes that they can claim back the Rift Rivals crown from China, and beginning their return to the throne of international League of Legends.

It’s not exactly the four best teams from Korea heading into the Korea-China-Taiwan-Vietnam skirmish, but it’s close. Only Sandbox Gaming, currently 7-1 alongside Griffin, are missing from the four-team representative squad. Instead, they are replaced by defending champions SKT, who as we just spoke about finally bounced back from a five-game losing streak.

Griffin and Damwon shape as Korea’s best hopes. Both teams collected 2-0 weeks in the round just gone, with Damwon especially the in-form team of the competition.

After starting slow out the blocks with losses to Gen.G and league leaders Griffin, Damwon has skipped out to a six-series winning streak across the following three rounds. Griffin sits just one match-streak shorter, having lost to Sandbox in Week 2.

The question marks for Korea, and potentially what could see the region come unstuck as they combine into a four-team outfit for the event, is SKT and KZ. Kingzone started their season on fire, before collecting three 1-1 weeks in a row. Defeats at the hands of Damwon and Griffin aren’t the worst results for the team, but a 2-1 struggle against Hanwha and the confidence loss from a 1-2 run in their last three series can’t be good.

Of course, SKT are the outlier for the region. While Griffin, Damwon, and Kingzone are scrapping it out in the top four, SKT nearly became lost in the doldrums of the relegation zone. If they had lost the Telecom War, their season might already be over.

With super-star carries like Khan and Teddy both having strong weeks against KT and Gen.G, there’s hope a corner has been turned. Mid-jungle duo Kim “Clid” Tae-min and Lee “Faker” Sang-hyeok have looked far from their scintillating best, but it never pays well to bet against Faker in international tournaments.

There’s a great deal of hope for Korea. Three of their top four teams are welcoming their Eastern rivals to the international tournament, and for the first time, LCK fans will get a glimpse at how young rising squads Griffin and Damwon play on the world stage.

While the EU-NA Rift Rivals tournament may not have been the most serious of affairs, the LCK-LPL-LMS-VCS iteration is always played out like a mini-World Championship. It’s exciting, interesting, and a perfect place to see how Korea’s Summer chances really shape up as they race towards the year-end tournament of Worlds.

Game of the Week: Damwon Gaming vs Kingzone DragonX

A week after the end of Rift Rivals, LCK teammates Damwon and Kingzone will turn on each other once more. With Damwon sitting in third with a 6-2 record, and Kingzone just one less win behind in fourth, this battle could determine who keeps up with the ever-improving Griffin and Sandbox combo at the top. If Kingzone can knock over Damwon, they stay in the race for top three. If Damwon can oust Kingzone’s challenge, it may become a three-way race for first in the blink of an eye.