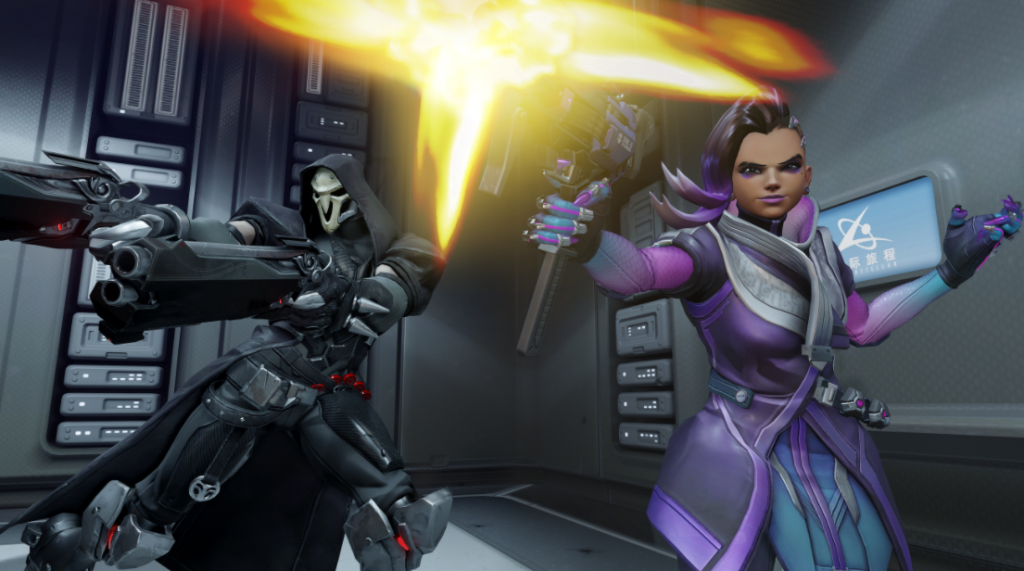 Sombra and Reaper are among two of the heros band in the OWL this week. (Photo courtesy Blizzard)

Last week, Overwatch fans were treated to some wonderful feline festivities as the OWL’s very own Tiger Queen Soe Exotic enlisted the help of her delightful cats Miso and Nori to randomly select the Hero Pool for week nine. The removal of Mei and McCree led to some unexpected places this week (so much Torbjorn), but it definitely shook up the meta in a big way.

While there were no cats involved this time around, Wolf did put his own spin on things by including an impromptu Korean lesson in the selection process. Between them, he and Achilios came up with a pretty interesting set of heroes for next week. Ana, D.Va, Reaper, and Sombra have all been removed from league play, which should have a substantial impact on the meta.

Sombra, Reaper, https://t.co/BtRwEj5E65, and Ana are taking some personal time 👋

How do you think their absence will impact competition? 👇 pic.twitter.com/F3ypaLwBjs

Through week five (the latest publicly available update of the OWL Stats Lab) D.Va was the most picked hero on any role at 85.5 percent. It’s not really a surprise given her historical impact. D.Va has been a fixture of nearly every meta in OWL history, from Season One’s dive comps to GOATs in 2019 to this year’s Rein/D.Va tank duo.

Seeing her featured in Hero Pools for the first time brings a different dynamic than we’ve seen to this point. Other flex-tanks will have an opportunity to thrive in her absence, which should have a ripple effect through the rest of the meta.

There are two possible paths here that the meta could go down, and it might vary from team to team. If you agree with Shaghai Dragons DPS star LIP, it’s time to bunker down with double shield comps with Hanzo and Mei. D.Va’s Defense Matrix is a great tool to mitigate the long-range poke that the bunker style dishes out, so it might be hard to do anything but answer with the mirror.

When none of the core bunker heroes got banned, it seems likely to dominate but there is another option. Reinhardt and Zarya have always been a fantastic duo as two powerful close-range brawlers. Rein’s shield enables Zarya to safely pump out damage and her bubbles let Reinhardt players live their best lives, swinging to their hearts’ desire.

With D.Va gone, those two provide a tried and true synergy to fall back on. The one question is whether they can safely close the gap to get into effective range. That’s easier said than done, but teams were already choosing Zarya alongside Rein the past two weeks, with D.Va available.

Losing Ana definitely hurts the brawl comps, but it could still be viable on certain maps at least. Expect Lucio, Moira, Mei, and McCree to slot in alongside the tank pair.

Some teams (e.g. the Chengdu Hunters) will still opt to go off-script no matter what Hero Pools throw at them. With Wrecking Ball back in action, teams that want to think outside the box have their most interesting hero again. The trouble is how often he was running alongside D.Va. It’s viable, at times, to run an Orisa as the other tank with Wrecking Ball, but most teams wouldn’t dare build their strategy around that.

The biggest winners on the surface seem to be teams that excel at bunker comps. In North America, that should give a boost to the Atlanta Reign and Philadelphia Fusion, but they play each other. Still, it might help the Fusion as they look to avenge their only loss of the season to the Paris Eternal.

Houston is a clear loser mostly due to the D.Va ban. MekO has picked D.Va nearly 100 percent of the time, and it’s not entirely clear if he can be an elite player on other picks. The Outlaws also lose out of Sombra, which has been one of their go-to heroes this season. Dante is flexible, but he’s just lost his best pick.

In Asia, things are a little more opaque. We only have a two-week sample size to make judgments about these teams in the first place. Shanghai so far seems like a very good bunker team, as does Chengdu weirdly enough. None of the Chinese teams looked awful per se, but rewatching the first Spark vs Charge matchup doesn’t instill confidence in either of their bunker setups.

Guangzhou and Chengdu will need to step their game up this week for regardless of the meta. They’re both staring down the barrel of the Vancouver Titans, who make their debut in the Asian region and hit the server for the first time since week one. The Titans are going to be a terror regardless of how the meta shakes out. Who knows? They might even play dive again.