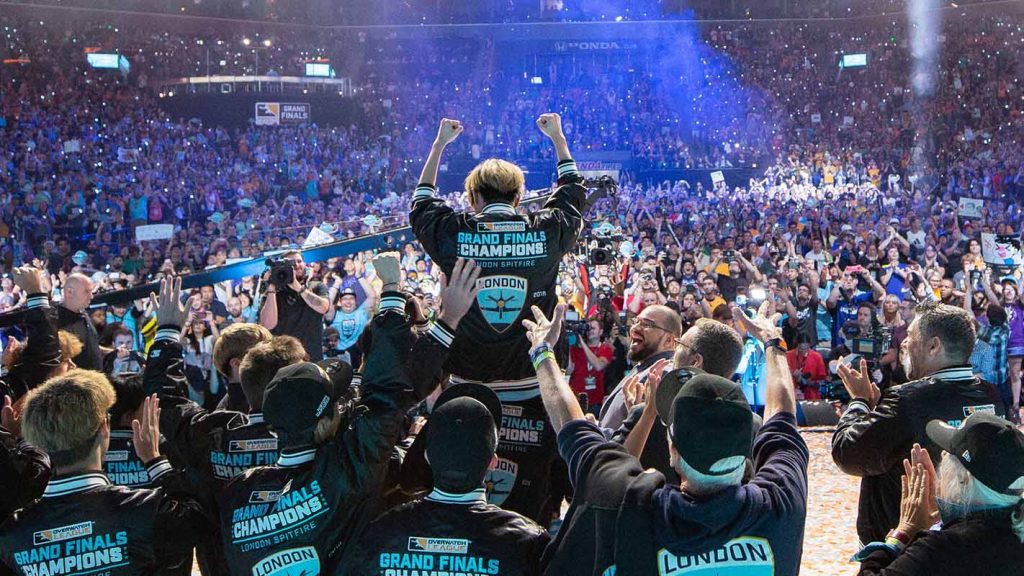 The London Spitfire emerged from the inaugural season as the Grand Finals winner - but who will win it all in season two? (Photo courtesy of Blizzard Entertainment)

The second season of the Overwatch League is rapidly approaching. With eight new teams and a plethora of player movement during the offseason, the landscape of OWL looks much different during the sophomore campaign of the league. So, we asked Hotspawn’s own Gillian Linscott and Justin Hartling to give their predictions on what will happen Overwatch Season Two.

Last year when Seong-hun “Jjonak” Bang won the MVP, he spoke with multiple new organizations speaking to the importance of a DPS player winning the MVP, and it really resonated with me. Jjonak was a dominant force last year, but I feel like Profit was equally as hyped up as Jjonak was. Profit was the unstoppable force to Jjonak’s immovable object, and it’s why I think Profit is going to claim the MVP this year. NYXL is primed to make it to the Grand Finals this year, and I know that Profit is going to help lead them there. Look to see the same breathtaking plays and insane strategies in this season of the Overwatch League.

I foresee the two powerhouses of the Overwatch League making their way to the Grand Finals of Season 2. With the best Korean Contenders League signed under the Vancouver Titans and one of the biggest teams to beat from the inaugural season, both NYXL and the Titans are most definitely heading to the Grand Finals. Who will emerge victorious will depend on how flexible NYXL has become with the changing meta and whether or not the Titans can replicate their past performances. My head says Vancouver Titans will win the Grand Finals, but my heart says NYXL.

I know, I know – it looks like it’s just wishful thinking, but I truly think that this year the Shanghai Dragons are going to be the biggest surprise of the season. Last year they went a shocking, record-breaking 0-40, and it really pushed management into making some tough choices. They dropped more than 80% of their players and essentially rebuilt the entire team. They learned their lesson about how crucial communication is for a team to be successful: this year their roster is almost wholly Korean. Everyone is expecting them to do better than last year, but I don’t think the League is going to be prepared for their hard-hitting tank line.

When you think of what disappointment means, you think of scores or overall ranking, but I’d urge you to expand your definition a little broader. The Washington Justice started the season with the biggest announcement fail with their team, logo, and website being leaked before the official announcement. In addition to the leaks, their announcement video drew criticism from fans across the world. One of the biggest issues fans had of the video was the use of Briggsycakes, an LA Valiant fan, without consent. In addition to the tone-deaf announcement, I don’t see big things happening from the Justice players. There’s going to be communication issues and synergy issues that I don’t know if Justice can overcome.

The Vancouver Titans were not playing around when they announced their entry into the Overwatch League. They signed the best of the best from the Overwatch Contenders League – Team RunAway. RunAway consistently placed top four in their Korean division since 2017. The players have been playing together for years and the level of synergy this team possesses rivals that of Overwatch League teams from the inaugural season. The Pacific Division is going to have a challenge defeating this powerhouse.

You need great play out of your main tank if you are going to be successful in the Overwatch League. A truly elite main tank makes everyone around them better. They are basically the epitome of a great passer in the NBA,  and Gesture is the Overwatch League’s Steve Nash. Through his positioning and intelligence, Gesture lifts every player on the London Spitfire to another level of play. And what truly defines “most valuable?” Is it popping off and making highlight-reel plays or is it being the quiet catalyst to a successful team’s playstyle? For me, I’ll take the latter every time.

Consistency and structure. These are two things both the Gladiators and NYXL bring to the table. Both teams have remained largely intact since the start of last year and both have exceptional structures they have built around. For the Gladiators, coach David “dpei” Pei always has a definitive direction the team will build toward based on the meta. For the NYXL, the team is built around Jjonak’s ability to be basically the best Zenyatta on the planet. If forced to choose, I lean towards the Gladiators’ flexibility over the raw mechanical prowess of the NYXL.

DPS players are going to be undervalued this year – especially the ones who specialize in hitscan heroes. Do-heyon “Pine” Kim is arguably the best Widowmaker and McCree player in the Overwatch League, but those two picks are just not offering that much value in the meta. The NYXL is swimming in amazing DPS players, but Pine looks like the odd man out. Jong-ryeol “Saebyeolbe” Park is the team captain, and Hae-seong “Libero” Kim is much more versatile. That’s not to mention Yeon-oh “Fl0w3R” Hwang. Pine is fantastic but he is non-essential to the NYXL.

To put it simply, the Valiant did not get better. The Pacific Division is stacked with talented teams who spent the offseason strengthening their rosters while the Valiant has arguably gotten worse. This is a team that lost their best DPS in Terence “SoOn” Tarlier and three of their coaches during the offseason. In addition, you look at this lineup, and there are simply not good enough support players. Yes, Scott “Custa” Kennedy was a godsend for this team, but nobody else is a real proven commodity. I expect a middling season from the Valiant.

If you can’t tell by now, I’m a big fan of the underappreciated talents when it comes to team-building, and nobody is easier to overlook than a team’s head coach. Julian “daemoN” Ducros is one of the best coaches in the Overwatch League and when you couple that with an experienced coaching staff surrounding him, the Eternal have the best base of any expansion team entering OWL Season Two. In addition to that, the Eternal are basically built to be the perfect triple tank, triple support team. This means that Paris should open the season strong in Stage One.