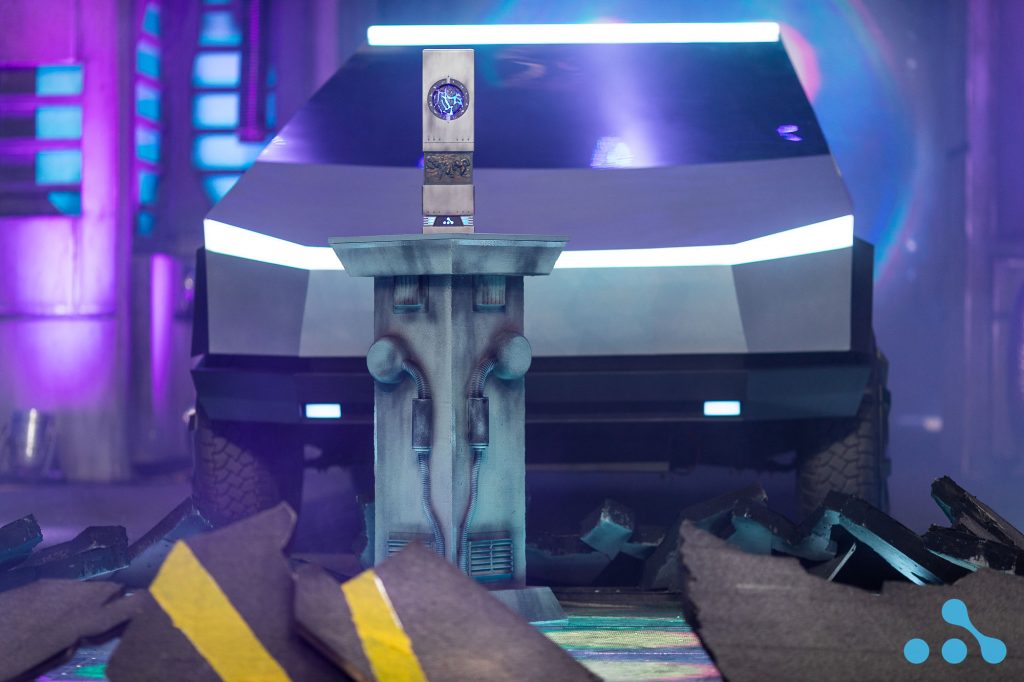 Nigma ran the gauntlet in the lower bracket and then reverse swept Team Secret to secure victory. (Photo courtesy WePlay!)

In another day filled with this event’s trademark cyberpunk style, the three remaining teams battled it out to grab the coveted Tug of War trophy. The production for this tournament has been amazing throughout, and today was no different, with teams again arriving in a super slick Tesla Cybertruck.

Before the finals could start, we had to decide who would be facing Team Secret – Nigma or Virtus.pro. Both of these teams have a history with Clement “Puppey” Ivanov and company. Regardless of the victor, there was sure to be a grudge match headed into the final.

Virtus.pro had previously pushed Team Secret to the limit in two tightly contested games in the upper bracket finals. But faced with the insatiable force of lower bracket Nigma, VP was sadly lacking. In game one, they floundered following an excellent start to the match. A promising performance from Zaur “Cooman” Shakhmurzaev on Morphling backfired as Nigma’s go-to Enchantress/Elder Titan composition came online. By locking down their opponent and layering their crowd control, Nigma could easily disable their opponent’s cores.

This culminated in a devastating fight at Roshan that saw Virtus.pro give up the Aegis and effectively end their chances of victory. Even with a hyper-fed Morphling, the team just wasn’t in a position to win fights. Both on their high ground and in the river, Virtus.pro found themselves caught out and killed.

Game two was even more of a disaster for Virtus.pro, as the team seemed to roll over and die for their opponents. This was no better demonstrated than in the side lanes, where Nigma was able to win in traditionally unfavorable matchups, including an embarrassing death for Roman “Resolut1on” Fominok on Omniknight.

In their final game of the tournament, the team who have found themselves wracked with the controversy of the CIS region as a whole failed to achieve their potential. Virtus.pro leave the tournament in third place and with a generous prize of $30,000.

Having, once again, run the lower bracket gauntlet to make it to another final, Nigma’s momentum took a sharp decline as they collided with the brick wall that is Team Secret. Despite not having much of a chance to play each other thus far this season, these two teams definitely have a rivalry brewing. The history of the players on each squad makes it inevitable. Puppey and Kuro “KuroKy” Salehi Takhasomi have gone from teammates to outspoken rivals with a now cordial, if not competitive, relationship. Meanwhile, Lasse Aukusti “MATUMBAMAN” Urpalainen and Aliwi “w33” Omar have their own bitter histories with the opposing teams.

With all this bad blood, it’s why the ease in which Team Secret won the first two games was so surprising. A misguided draft from Nigma lead to several early game kills for their opponents. Their Io pick was a non-starter once Secret remembered the number one rule of playing against the Wisp: Focus Io. A few kills in lane due to poor positioning and a host of early structures allowed Secret to pick up a massive gold lead. As a result, even questionable decision making on the part of Misha couldn’t slow them down.

Nigma’s strategies which had led them through the entire tournament so far had fallen apart, and their drafting seemed lackluster. For game two, the stack doubled down on their Io pick, and swapped to the Lifestealer which had proved so reliable earlier in the event. But in game, things didn’t go much better. Team Secret amassed another comfortable gold lead, after roaming around and killing their opponents on cooldown. As a byproduct, this created a situation where Ludwig “zai” Wåhlberg was almost unkillable; in part because of his Pipe of Wisdom pickup.

Why do I hear boss music? Nevermind it's just Raid Boss Zai 😳

Nigma had made the mistake of tri-laning for most of the start of the game. As a result, this had left their vitally important Lifestealer pick with a lack of both gold and experience; two essential components of this late-game hyper-carry giving Nigma with no answer for Secret’s Juggernaut. Although not the most-picked or common carry, the Jugg is near unstoppable if allowed to get farmed, and this was precisely the case here.

Again, Nigma’s tried and tested strategies failed, so for game three they mixed things up. A potent Leshrac/Outworld Devourer in game three facilitated the first successful use of Io of the series. With these two carries almost unkillable, Kuroky and his stack decisively moved around the map. After a dominant early game, the team transitioned into a roaming gank squad, picking off their opponents in every lane before pushing high ground and taking their first win.

Facing a loss, and the potential for a reverse sweep, Team Secret went hard in the draft. They banned away the Io after the first game it had any sort of success. They also picked incredibly reactively, manufacturing an awful matchup for Ivan Borislavov “MinD_ContRoL” Ivanov on Underlord with their punishing Slark pick. However, with their seemingly better draft, Secret couldn’t stop what Nigma had planned. The definition of madness is doing the same thing over and over and expecting a different result. But for Nigma, trying the same strategy of getting one of their cores fed on a hyper carry over and over, seems to have worked. It also helped that in this game they were able to punish Secret any time they were out of position.

Even with Matumbaman’s mobility on Slark, and Nisha’s hard carry potential on Troll Warlord, Secret lost in a worryingly quick fashion. With barely 25 minutes in the clock, Team Secret tapped out to a super fed Nigma.

With one more game left in the tournament, both teams took out all the stops. They started by banning away the supports which had wreaked havoc on the early games of each match, such as Razor, Enchantress, and Io. Then as the game kicked off there was blood almost immediately, with Yazied “YapzOr” Jaradat’s Snapfire getting caught out and killed right as the first waves collided. As a result, Nigma’s cores got an excellent start to the game, grabbing easy kills in lane, and controlling the pace of the game right from the first few minutes.

The problem for Secret was a lack of early kill potential. Tiny couldn’t kill the Leshrac without ganks. After a series of disastrous team fights in the side lanes, Amer “Miracle-” Al-Barkawi’s Faceless Void was instantly deleting people as soon as Chronosphere was off cooldown. The team roamed the map, and by 15 minutes, Nigma was already preparing to finish off tier two towers, while Team Secret fell for obvious baits

By 20 minutes, Nigma easily took Roshan and felt confident enough to start pushing high ground, with their Faceless Void protected by Aegis. The game was a microcosm of Nigma’s strategy for the entire tournament. They facilitated a single carry to get as fed as possible, and rolled their opponents, never letting up.

Nigma takes home the trophy, $130,000, and the knowledge that they’ve bested some of the game’s very best teams. It’s incredible that a stack this good will be completely missing the next two Dota Pro Circuit events after their disastrous qualifiers run. Team Secret will console themselves on the fact that this tournament ultimately didn’t affect their DPC standings. The team will have bigger fish to fry at the upcoming Major, and their second-place finish still means they take home a healthy $60,000.